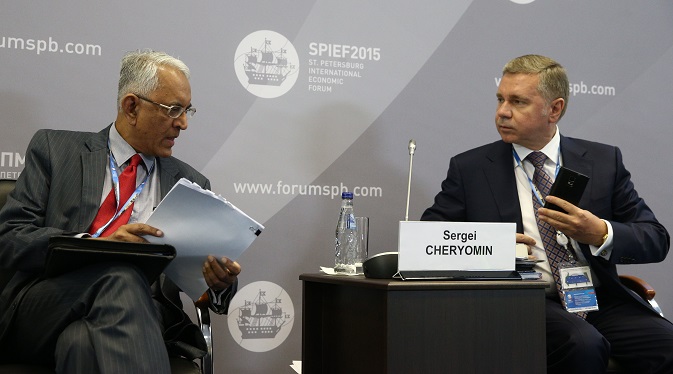 India is represented at the 2015 St. Petersburg International Economic Forum by a large and diverse delegation, from government authorities overseeing trade and investment to private sector executives with interests including energy, defence, infrastructure and pharmaceuticals. Russia and India, they believe, should look to enhance trade supported by larger mutual investments.

The 19th St. Petersburg International Economic Forum (SPIEF) saw a large number of participants from various counties and sectors attending, despite western-imposed sanctions and political tensions of the past months.

According to the organizing committee, more than 6000 business leaders and government officials, from 115 countries, participated on the first day of the forum. To ensure coverage of events, around 2000 Russian and foreign journalists were present.

Many participants noted the “Asian” flavor of SPIEF this year, with the high number of delegations from Asian countries, led in size by China and India. The SPIEF also a very large number of panel sessions and round tables on development of trade between Russia and Central and South Asian countries.

The forum’s first day was packed for the Indian delegation led by State Minister for Commerce and Industry, Nirmala Sitharaman, who not only participated in panel discussions through the day, but also hosted an India Reception at one of the city's largest hotels in the evening. Although the Minister did not attend the reception herself, the opportunity for Indian and Russian business leaders to meet in informal surroundings would facilitate further bilateral negotiations.

While business leaders discussed trade and collaborations, Commerce minister Sitharaman participated in a session on cooperation within the Eurasian Economic Union(EEU) and signed an agreement for a joint feasibility study on the Free Trade Agreement between India and Russia with Andrei Slepnev, EEU Minister of Trade.

“The new government of India continues strengthening and widening cooperation with Eurasian Economic Union and its members,” Slepnev said. “We have mutual understanding that future agreement has ambitious goals and has to cover a wide range of sectors, including trade of goods, services. It will be important but not the only element of cooperation between our countries”.

Sitharaman noted that this agreement was a real milestone in relations between India and EEU, comprising Belarus, Kazakhstan, and the Russian Federation.

“The relationship has immense potential for us, for two regions to build on their strengths. Recognizing the potential that is waiting to be fully capitalized on, I am actually very pleased that it has been formalized today. Once the report is submitted, the mechanism for engaging in free trade negotiations can conclude logically in a free trade agreement,” the Indian commerce Minister said. “India also looks for investments since there is a huge potential in such sectors as infrastructure, defence, and technology intense sectors”.

Indian government officials, industry leaders and CEOs actively promoting “Make In India” at the St. Petersburg forum, believe Russia and India should not only focus on increasing bilateral trade to achieve the figure of  $25 billion in the next five years, but also raise investments, in defence, energy and other sectors.

“The potential that exists between two countries, our leaders have said, we should exploit it but has not actually happened on the ground and we need to consider why,” P.S. Raghavan, Ambassador of India to Russia, said addressing the Indian and Russian business community.  “Given the circumstances, Russia is particularly looking to the East to develop its economic relationship, and it is a critical opportunity for Indian industry”.

The Ambassador noted that Russian business should consider new opportunities for investments in India that have opened after the new government came to power.

“Efforts to strengthen the manufacturing sector and help persuade investors to set up manufacturing in India has led to new initiatives like easing of doing business, amendments to labour reforms, liberalizing FDI regime, including increasing the cap in investment in defence manufacturing, an important part of cooperation between Russia and India, from 26 per cent to 49 per cent,” Raghavan said.

He added that 100 per cent FDI is now permitted in the construction, infrastructure and maintenance sectors, all prospective areas for Russian investors.

Sumit Mazumder, president of the Confederation of Indian Industry (CII), said, “our countries should move towards holistic economic engagement.” He stressed on energy, oil and gas sectors, defence manufacturing and pharmaceuticals as the most important areas for businesses of both countries to look at.

Talking to RIR on the sidelines of the forum, Mazumder said Russia and India should work on various barriers constraining larger cooperation between countries.

“The currency in which trade is happening is one of the hindrances. There is an undue delay in solving this question of settlements in local currencies. Movement of people is another issue.  In this dynamic world you need to move fast. If I get a call from my Russian partner that I have to be there in Russia, I cannot wait for seven or ten days to get a visa. The movement of goods and services between countries is another area where various customs, tariffs and non-tariff related issues have to be resolved between countries”, he said.

V. Kotwal, Board member & President (Heavy Engineering), L&T, who came to St. Petersburg looking for new partnerships with Russian business, believes there has been a significant change in the mindset of businesses regarding cooperation between Indian and Russia.

“But I can see a certain mindset still exists among Russian businessmen that anything related to defence sector has to be done through government. This has changed in India and business here should consider it,” Kotwal said.

He also noted that the oil and gas sector, especially its technological aspects, has a huge potential for both countries. “Combination of Russian technology and Indian enterprise and growing manufacturing capabilities will do the job,” he said.

Prashant Ruia, chief executive of the Essar Group, said although the volume of mutual trade and investments between Russia and India is not large, not more than $10-12 billion, the energy sector is an area businesses should focus on to increase these figures. “In the last five years India has invested close to $200 billion in various energy sectors and infrastructure, and even after all this, our current consumption, if you look at the per capita rate, is still about one fifth of what China is consuming today, given that China has similar population”, he said.

Ruia believes it really is up to the business community to convert relations between Russia and India and deepen them by “actually participating in each others economies. This cannot happen just with trade, it has to happen though investments”.

During the forum, business leaders of both countries also discussed investments and cooperation in infrastructure, railways and logistics sectors, as well as telecom, IT, banking. Russian businessmen outlined problems they face doing business in India and noted that, despite some constraints, issues with regulation, the overall investment climate has been improving significantly and India looks like a prospective venue for new investments to be made.