Rivals in arms, in the sky 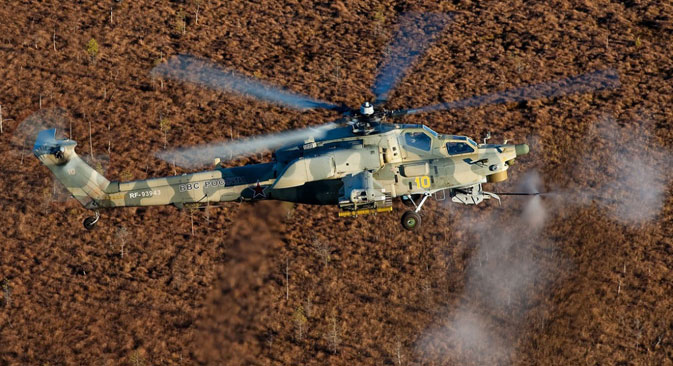 The Russian army’s two main attack helicopters, Ka-52 and Mi-28N, have been vying for a place in its ranks since the 1980s. As the Russian Defence Ministry could not choose between them, they acquired both. Why was choosing between them so tough?

Helicopters came into being after the major wars of the 20th century were fought. The helicopter had neither the altitude nor speed to work in either of the world wars fought in the last century. But the helicopter has come into its own, with a number of advantages over attack jet aircraft, as a means of battle support.

The Soviet Union built two attack helicopters in the 1980’s. Two Soviet design bureaus, Mil and Kamov, built them as a counter to the American AH-64. Test results till the end of the 80s showed the single-seater Ka-50, built on the coaxial scheme, winning over the traditional Mi-28 by Mil. The Russian Federation inherited these machines. However, at the turn of the 21st century, the Mi-28 with ‘N’ tag trumped its old rival, as a result of which the Defence Ministry decided to buy them both.

Despite their different appearances, both helicopters have a great deal in common. The destructive weaponry has been optimally integrated with other types of equipment in service with the Russian army. Both helicopters carry a 30-mm automatic cannon 2A42 the same as is installed on BMP-2 and BTR-90. Only the quantity of ammunition is different: Ka-52 has around 460 rounds, while the Mi-28N has 300. Both carry identical blocks of 80 and 120 mm unguided missiles. Only the precision weapons are different. Both helicopters can use ATGM "Ataka-V" and MANPADS "Igla". In addition, Mi-28N can carry ATGM "Shturm-V" (Ka-52 carries “Shturm-VU" with multi-channel laser-beam guidance system), and Ka-52 - "Vihr-M."

The advantage of ATGM "Vihr-M" (launch range up to 10 km) is the ability of the Ka-52 to fire outside the reach of self-propelled missile systems "Roland", MANPADS "Stinger", "Mistral" and artillery complexes "Gepard".

A notable advantage of the Ka-52 armaments over the competitor consists in two additional points of suspension; 6 instead of 4; and an additional 500 kg of payload.

There are external differences in mounting the radars.  The Mi-28N’s radar N025E is mounted above the rotors, like in the American Apache, while the Ka-52’s radar "Arbalet" is located in the nose, like in jet aircraft. The top-mounted radar gives the helicopter an advantage, especially in a hilly and forested mountainous terrain. The engines are almost the same in both helicopters: the ТВ3-117МА.

Mi-28N has a classical design, with one main and one tail rotor. The Ka-52 has technically complex coaxial configuration of two rotors, which can control both flying and driving. This configuration makes the helicopter more powerful, enabling it to fly 100 to 200 metres higher, making quite a difference in mountainous terrain.

The Ka-52 can hover at the end of the maneuver. The Ka-52 can glide, unlike classically-designed helicopters. It can fly backwards at speeds up to 100 kms / hour and at a speed of 230 kms / hour the glide angles reach ± 90 degrees.

For the Mi-28N to get into attack position, it has to make a turn like an aircraft, which takes more time. Ka-52 can perform the "funnel" combat technique when the helicopter maintains a line-of-sight to the target while flying small circles around it and firing at it.

While the Mi-28N and Ka-52 are very similar, the Kamov machine has an edge, and is more expensive than Mi-28N. The Russian Armed Forces use both types of helicopters, while Mi-28 has also "made a career" in foreign armies. The Ka-52 has yet to fly abroad.