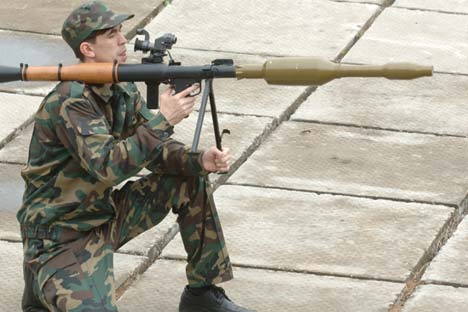 The Russian RPG raised the battle between “armour and projectile” to a new level. Source: TASS

Almost as well-known as Kalashnikov assault rifles, Russian rocket-propelled grenade launchers (RPGs) are among the best known weapons in the world. The Russian RPG raised the battle between “armour and projectile” to a new level. Outlined below are three of Russia’s most popular “tank killers”.

The Bazalt scientific-manufacturing association debuted with the Soviet RPG. It was the seventh in the series (RPG-7) which became popular in African and Asian countries, and also in Hollywood movies; cementing its place as a battlefield leader, for its reasonable quality and cost.

This grenade launcher takes the top place, despite its age and other, more powerful, descendants in the stellar cast of RPGs. The RPG-7 is of 1961 vintage. In 1968 it caused the American army a lot of problems. The projectile charge ranged from 40 to 150 mm with a rocket in the rear increasing its range from 150 to 500 meters. The warhead could pierce through 320 mm of armour.

The RPG-7 is still widely used in regional conflicts, because it is inexpensive and available. More than nine million RPG-7s have been manufactured. The modern equivalent, the PG-7VP, has a tandem charge; the first acts as a decoy for the tank’s reactive armour, while the second punches through the armour.

The RPG-29 Vampire, manufactured in 1989, is also popular. Also known as ‘the Vampire’, its primary function is to breach any reactive armour and strike the target. The grenade pierces armour of up to 500 mm thickness.

The size of the launcher was raised to 1.85 meters, as a result of which the charge is capable of piercing more than 600 mm of homogenous armour. The missile’s propulsion turns on via an electrical system. The Vampire, with a 105mm head, is armed with tandem shaped and thermo-baric warheads. It is one metre long.

It is also equipped with optic sights for firing prone. This grenade launcher was a critical reason for heavy Israeli tank losses during the Second Lebanon War, with Hezbollah, in 2006.

Tel-Aviv confirmed the loss of eight Merkava tanks. The Vampire is now actively being used in Syria by both armies. The main advantage and reason for its place as second on our list, is the correlation of cost and quality. The Vampire is cheaper by a factor of ten than other, modern anti-tank rocket launching systems and hundreds of times cheaper than a tank, which this RPG can knock out of formation with a single shot.

The Russian designers at Bazalt sought ways to overcome reactive armour long before such armour was adopted on the battlefield. The greatest success it achieved was in 2006 when the RPG-32 ‘Hashim’ project was established with Jordan, with the joint venture JRESKO corporation.

This unique project incorporated all the past successes of rocket propelled grenades and received all the latest technology from munitions to night vision. For the first time ever, it was adopted by Jordan and Russia using the same standards.

The RPG-32 has no power supply units, although it does have an electrical starting system. This function is performed by generators. The reusable system allows for the suppression of the enemy with 75 mm and 105 mm ammunition. The Hashim has an integrated system for multi-level fire using a trigger device and multi-calibre reusable cartridges. Powerful charges are not wasted when overcoming light obstacles in the form of automobiles or house walls. The shaped (105mm) charge penetrates up to 1000 mm of armour, while the 75 mm charge penetrates 500 mm of armour. It weighs 3 kg, enabling the fighter to place the RPG-32 in battle mode within seconds and conduct targeted fire from any position, including using night mode.

The Bazalt company and KADDB (King Abdullah II Design and Development Bureau) have received medals for "Quality assurance and safety" for developing the Hashim.