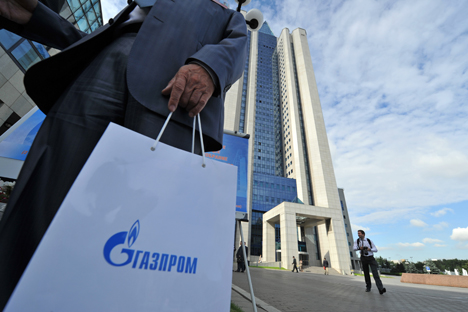 Russia’s Gazprom will sell 3 billion cubic meters of gas to European consumers. The company unexpectedly announced the possible continuation of transit through Ukraine. According to Russian analysts, Gazprom did so to reduce risks from possible construction delays of the Turkish stream and yielded to European consumer pressure.

The Russian gas monopoly Gazprom will hold an auction in September 2015 to supply three billion cubic metres of gas to Europe, Russian business newspaper Kommersant reported. The paper quoted Gazprom CEO Alexey Miller, who said there would be a spot bid auction, for the supply of gas "here and now," instead of the traditional take-or-pay method used by Russian companies; where the buyer agrees to buy a certain amount of gas in the long term and, in case of the volume is less than agreed, pays the fine.

Against this background, Gazprom has unexpectedly announced possible continuation of transit through Ukraine. Earlier, to abandon this route, Gazprom announced the Turkish Stream; the gas pipeline project that would bring gas under the Black Sea from Russia to Turkey and further into countries of southern Europe.

“Gazprom selling 3 billion cubic meters of gas on the spot market can be seen as a trial balloon," said Ivan Kapitonov, Deputy Head of the Department of State Regulation of the Economy at Moscow's Presidential Academy of National Economy and Public Administration
However, if such a plan were successful, it would not only allow Gazprom to sell additional volumes, but also give it a stronger negotiating position on the Turkish stream: that project is still under negotiation. This way, Gazprom signalled that it was considering alternatives to increase gas supply to Europe, said Kapitonov.

According to Ilya Balakirev, senior analyst at UFS IC, Gazprom sells small volumes of gas on the spot market once in a while, but the Russian monopoly is unlikely to abandon the take-or-pay scheme. "This condition results from the fact that the pipeline deliveries have actual fixed transportation costs, and if the actual supply volumes become significantly reduced, the company will incur losses," said Balakirev. According to him, Gazprom might abandon the take-or-pay scheme only if the technology of gas transportation changes. Such schemes can not be used for tanker shipments of liquefied natural gas.

According to Kapitonov, the presidential suggestion to negotiate the extension of transit through Ukraine after 2019 could be for several reasons. First, to increase pressure on others involved in the Turkish Stream, and second, possible rapprochement with the Ukrainians.

According to Balakirev, "perhaps, potential Turkish stream partners became too intractable, and this is a signal for them." However, since the “first string of the Turkish stream is intended only for the Turkish market, it would be completed in any case.”

At the St. Petersburg International Economic Forum in June, Gazprom decided to double the capacity of the Nord Stream pipeline. Gazprom, signed a memorandum of intent with the Anglo-Dutch Shell, the German E.On and the Austrian OMV to build two gas streams from Russia to Germany under the Baltic Sea, with a total capacity of 55 billion cubic metres.