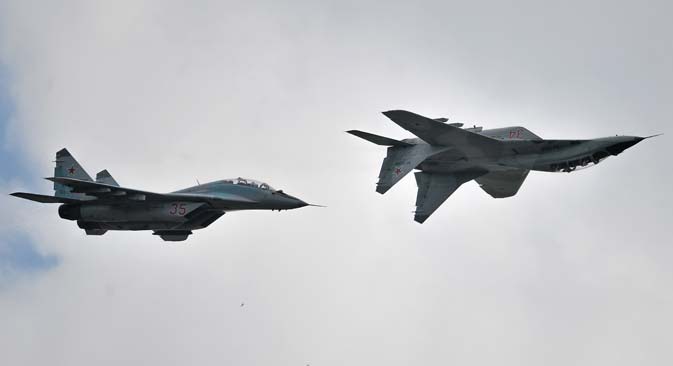 While working in straitened circumstances, the Russian Aircraft Corporation (MiG), legendary manufacturer of Soviet light MiG jet fighters, continues work on a light fifth generation fighter, Sergey Korotkov, general director of RAC said. He admitted, however, that there were no orders for this aircraft. So what is MiG counting on?

The famous design bureau is betting on its extensive experience, brand awareness, and the fact that, according to Sergey Korotkov, “the global market for this jet fighter is quite large”. MiG has decided to follow the same path that its main Russian competitor Sukhoi followed in the 1990s. This path involves reorientation to global markets and attracting foreign financing for building new aircraft. The difference is that Sukhoi took to this path during booming development, inherited from the Soviet era, while MiG perforce took this path at a stage when it has no defence contracts.

Since 2000, the State began to give priority to aircraft built by the Sukhoi Experimental Design Bureau (EDB). The organization had managed better and proved more effective to survive through the difficult period because of foreign orders.

That was when the fifth generation aircraft project was taken away from the MiG EDB, and priority given to Sukhoi’s S-37 project. This happened despite the fact that the MiG 1.42 made its first flight (first prototype of the MiG 1.44 fifth-generation fighter, or multifunctional frontline fighter (MFF)) in 1999. Notwithstanding the near completion of the MiG light combat aircraft, the government chose to prioritise funding to the Sukhoi project.

Even when it became clear that Sukhoi’s C-37 would remain an experimental model, the MiG was ignored, and the government gave preference to developing the PAK FA, work on which started only in 2002. It flew for the first time as late as 2010.

Work on the MiG 1.44 started in the early 1980s. By the time the Soviet Union collapsed, the preliminary designs and the model of the aircraft were ready, making it ideally positioned to be developed as the fifth generation fighter jet. In the 1990s, despite the absence of funding, the MiG team carried this project forward and built the first flying model. But the government continued to ignore the results of this work.

In search of investments

In 2006, MiG became part of the newly established United Aircraft Corporation (UAC), which further reduced the independence and prospects for promotion of the experimental design bureau’s projects.

Ovanes Mikoyan, son of the famous creator of the Soviet MiGs, an eminent aircraft designer himself and adviser to the director of the Mikoyan EDB engineering centre, said the fifth generation LCA by the Mikoyan EDB was simply “crushed”. According to him, in the current Russian aviation industry system “the one who has more money and influence survives”. According to Mikoyan, a veteran of Soviet and Russian aviation, MiG and Sukhoi had always worked on different types of fighters (MiG- light aircraft, Sukhoi – heavy planes), but the competition began only when their “financial interests began to collide”. Simply stated, the MiG lost in the struggle for government money.

Currently the RAC MiG has virtually no orders. The latest major contracts for supply of MiG-29K fighters for the Russian and Indian navies are being completed.

MiG lost the tender for the supply of light fighter jets to India to the French Rafale.

The UAV design projects proposed by MiG did not receive government funding.

As a result, the company’s management is now forced to look for opportunities to replenish its orders portfolio, including search for a partner/customer to create a fifth-generation fighter.

This will not be easy without a finished product on hand, so the company must now build at least a flying prototype or a technology demonstrator. However, the UAC has clearly stated that the creation of a light fifth generation fighter is not a priority for the company. Even the PAK FA project has turned into a heavy financial burden for the government, and the number of units it plans to purchase is being constantly reduced.

That is why Korotkov started talking about the need to replace the MiG-29s, “of which there are many all over the world”.

But whether a Russian light fifth generation combat aircraft will ever make it to the external market remains uncertain.