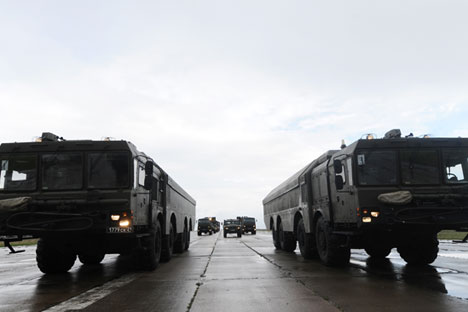 A stationary system can survive a massive modern air attack and, under certain conditions, even a nuclear strike. Source: Sergey Pivovarov / RIA Novosti

When Crimea joined Russia, the Russian Naval Command needed an integrated coastal defence system on the Black Sea. A key element of the new coastal defence system in this developed as the Bastion: a unique missile complex on the Black Sea, described by analysts as among the best such defence systems worldwide. Discussions are on to bolster this with a network of defensive posts along Russia’s Black Sea coast, to be based on a stationary missile system; the silo-based Bastion-S (“S” for stationary).

Russia pioneered the land-based missile system to protect its coastlines. The first such defensive complex consisted of cruise missiles, then called “flying bombs,” and was in place in the Soviet Union in the late 1950s.

These missiles ranged from between 15 and 95 kms. In 1972, the Crimean base operated a new missile system, the ‘Utes’ (Rock Cliff), using P-35B anti-ship cruise missiles with a range of upto 300 kms, and a modified version of the Progress, with a range of 460 kms. The mobile launching pad with these missiles was the ‘Redut’ (redoubt).

Stationary systems were decommissioned years ago, but a change in the military-political situation has prompted Russia’s military leadership to again revisit this mechanism.

Can survive even a nuclear attack

A stationary system can survive a massive modern air attack and, under certain conditions, even a nuclear strike. All systems of a stationary complex could be placed in well-protected underground shelters. Primed for immediate use, the missiles are arranged on launchers located within protected bunker-like silos which can even be built on rocky ground. The missiles are stored in their original containers, used for transportation and launching, and do not require replacement or major maintenance for about 10 years.

The Bastion-S has can hit surface and shore targets at least 300 kms away. The missiles can be deployed at two different trajectories. The combined trajectory (high-altitude cruise followed by low-level flight as the target approaches), provides a longer range and low-altitude trajectory reduces the effective range but significantly increases its stealth capabilities and decreases the probability of the rocket being hit by the opponent’s missile defences. The missile’s survival is ensured by its ability to carry out effective evasive manoeuvres to avoid enemy air defences.

One Bastion-S system, with a standard complement of 36 missiles in single launchers, is able to provide protection for at least 600 km of the coastline, and guarantees destruction of opposition targets above-water. The system can also hit land-based radio-contrast targets. All this can be done under intense fire and electronic counter-measures used by the attackers.

The stationary, highly protected system was proposed some years ago by the Russian-Indian company BrahMos Aerospace, which produces BrahMos missiles, based on the Russian Yakhont missiles.

The mobile BrahMos shore and ship-based versions are widely deployed today by India’s army and navy, while the Russian Bastion-P has assumed the protection of Crimea, placing most of the Black Sea in its sights. They have also been deployed in Vietnam and Syria.

The choice is obvious; supersonic missiles of the Bastion complex can destroy any enemy ship within range. A salvo launch of such missiles is impossible to escape, because a unique group attack programme becomes activated. The missiles themselves allocate and classify the targets being attacked by importance, as well as select the attack scheme and plan its implementation. As a result, the missile “swarm” strikes from different directions, and after the destruction of the main target, the rockets quickly reorient to the remaining vessels, leaving the enemy with little chance of survival.