Drones with radars to fight terror 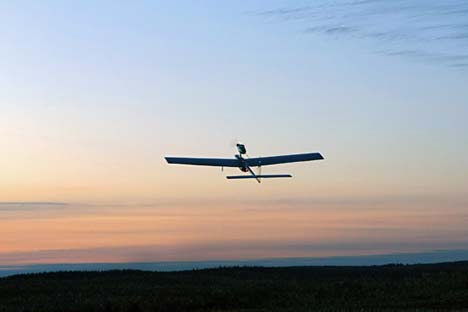 The new drone can carry out aerial surveillance regardless of weather conditions or time of day with information transferred in real time. Source: RIA Novosti/Alexey Danichev

With a steady increase in irregular warfare, various types of guerrilla conflicts, separatist rebel and terrorist movements, regular armed forces are seeking cheap and effective technological means to combat them. Russia has taken another step in this direction, matching the United States in building special “anti-guerrilla” radar for drones.

At a closed door session of the Army 2015 exhibition, held early in June, specialists saw a presentation of Russia’s first unmanned aerial vehicle (UAV) which can find targets in forests, under vegetation and even underground.

The drone, named Merlin-21b, can fly at heights up to three kilometres for a distance of up to 600 kms.

In Merlin’s case, however, it was not the drone but its radar which was of special interest. The radar, though small, can work simultaneously in the VHF and UHF range.

“Russia’s new unmanned aerial vehicle, the Merlin-21b is equipped with a small radar of its own design. The UHF range of the radar enables it to find objects beneath vegetation, which have been camouflaged from visual observation, and the VHF range enables us to receive high quality images”, reported RIA Novosti news agency, citing a source at the Russian Defence Ministry’s press service.

“The principle for the UAV’s operation is directly linked to its payload. The radar is able to ‘see’ many more objects than, for example, thermal imaging. However, the use of the two ranges for radar does not contain know-how which is entirely Russian,” said Vladimir Shcherbakov, editor of Nezavisimoe voennoe obozrenie (Independent Military Review), speaking to RIR.

The new drone can carry out aerial surveillance regardless of weather conditions or time of day with information transferred in real time. These features can not be emulated by high definition cameras traditionally used by drones, whose capabilities are limited by the weather and by the terrorists’ use of mountain locations or forests for cover.

The features of the new UAV are important primarily to conduct special operations in the war against terrorism, where it is necessary to find targets and destroy them with maximum speed and efficiency, using long range, high precision technology. Speed is critical for reduction of military and civilian casualties.

The Russian drone differs in size from the American UAV from Lockheed Martin unveiled in 2012 with the TRACER (Tactical Reconnaissance and Counter-Concealment) radar. The American radar also uses two channels (UHF/VHF), but is installed on the MQ-9 Predator, which is significantly larger than the Merlin-21b.