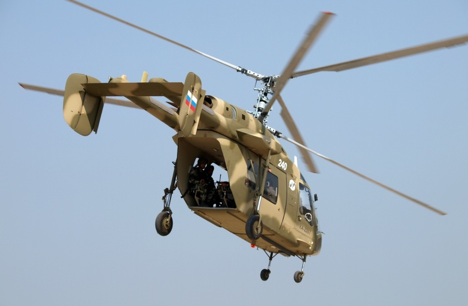 The recent deal about joint production of 200 Kamov-226 helicopters is no less than a big bang. Source: Russian Helicopters

The announcement of joint production of helicopters in India dispelled fears that the bilateral defence relations are in a quagmire.

The announcement of joint production of helicopters in India dispelled fears that the bilateral defence relations are in a quagmire. The timing of the announcement particularly after the visit of Indian Prime Minister Narendra Modi to Russia, and his meeting with Russian President, Vladimir Putin, is no less significant. Modi has already declared that Russia is the primary defence supplier of India, and, in this context, it will not be a surprise if more defence deals are announced in coming months.

Indian Ambassador to Russia, P. S. Raghavan displayed substantiated optimism when he averred that the recent deal about joint production of 200 Kamov-226 helicopters is no less than a big bang. A regular watcher of India-Russia relations would find it difficult to disagree with the ambassador. The recent announcement dispelled much of pessimism generated by the Rafale deal. Also, particularly after the agreement on the BrahMos missile about a decade ago, not much progress has been made about joint development and production. The announcement of joint production of the light transport vehicle, which can be used for rescue, police and military operations, would be another landmark after BrahMos. It may not be out of context to mention that India’s defence relations with Russia go beyond seller-buyer relations. Any other pair of countries seldom enjoys this type of relationship.

The likely transfer of technology in building the helicopter will be advantageous for India. India’s indigenous defence industry is at an infant stage, and Russia’s transfer of technology would boost the indigenous industry. The transfer coupled with a possible license would boost India’s production capability. It will also enable India, along with Russia, to market the helicopter in third countries for profit. During the visit of Putin last December, both countries had deliberated on the Kamov-226 deal. The meeting of both the leaders early this month in Ufa might have contributed in giving a concrete shape to this deal.

The deal will be India’s first such defence deal after Prime Minister Modi’s hyped ‘Make in India’ initiative was announced last year. The prime minister, known for his dynamism for promoting this initiative throughout the world during his visits, might have been impressed at this gesture of Russia in coming forward to give concrete shape to his dream, and in helping India towards becoming self-reliant in defence technology and products.

Some other deals which both countries will likely finalize in coming months include setting up of units of Russian Original Equipment Manufacturers in India for maintenance and repair of Russian fighter planes like Sukhoi and Mi helicopters. There are also deliberations going on for the joint development of Fifth Generation Fighter Aircraft, which has already passed the preliminary design stage. There are also reports that Indian Air Force has proposed to acquire 48 additional Mi-17 Helicopters from Russia worth $1.1 billion.

In the area of defence, India can hardly afford to ignore Russia, a strong and reliable partner. A strong India-Russia defence partnership is not only desirable but also necessary.