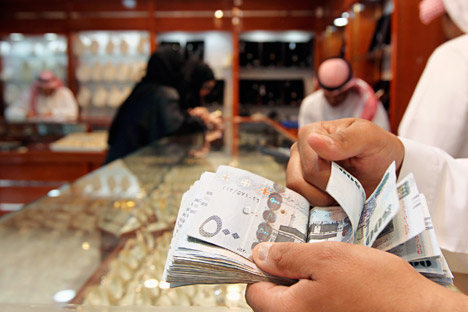 Islamic financing would help Russian companies compensate for the shortage of finance caused by the cooling of political relations between Russia and the West. Source: Reuters

The Saudi Arabian government’s sovereign wealth fund said it was investing $10 billion in Russia this year. The fund will work in partnership with the Russian Direct Investment Fund (RDIF).

The Saudi Arabia Public Investment Fund is investing $10 billion in Russia, and will create a partnership with the Russian Direct Investment Fund (RDIF), a state-controlled investment fund supporting promising projects in Russia. Vedomosti cited RDIF Chief Executive Kirill Dmitriev as saying the amount would be invested over a period of four to five years.

According to Dmitriev, the partners have already approved seven projects, and they plan to increase this number to ten by the end of 2015. It is still unclear what these projects are. The partners say the funds will basically be directed towards infrastructure, agriculture, retail, medicine, and real estate. Among the projects being considered are the Central Ring Road around Moscow and reconstruction of the Taman port in the south of Russia. Although Saudi Arabia was earlier willing to invest in enterprises in Tatarstan for the cultivation of wheat and barley, the deal did not advance beyond the signing of a memorandum.

Dmitriev said the personal meeting between Deputy Crown Prince of Saudi Arabia Mohammed bin Salman and Russian President Vladimir Putin at the St. Petersburg International Economic Forum in mid-June was viewed positively viewed by investors. According to Irina Rogova, an analyst from the Forex Club investment firm, the presentation of the Saudi Arabia’s Minister of Petroleum at the St. Petersburg Forum was also significant. Rogova adds that this was the first time Russian and Saudi leaders held serious talks.

“The motives for such a decision on the part of Saudi Arabia are completely commercial,” says FINAM investment holding analyst Anton Soroko. “The Russian economy has suffered over the past 5-7 years because of the outflow of foreign capital, and now it is necessary to end the recession and enter into a trajectory of stable economic growth.”  He adds that with such an investment shortage in Russia, the returns on investments can be substantially higher than the market average.”

Rogova adds the RDIF has already entered into partnerships with Arab funds. She says the Russian fund reached agreements with the Kuwait Investment Authority, Mubadala from the UAE, and the Abu Dhabi Department of Finance on investments of $500 million, $2 billion, and $5 billion, respectively. In addition, the investment from the Arab funds is funneled automatically into those projects, which the Russian fund selects. Furthermore, memorandums on cooperation were signed with the Bahraini fund Mumtalakat and Qatar Holding.

Rustam Minnikhanov, President of Tatarstan said earlier this year at the Kazan Summit economic forum, that the Russian internal republic is predominantly populated by Muslims and Islamic financing would help Russian companies compensate for the shortage of finance caused by the cooling of political relations between Russia and the West. “Muslim countries did not join in the attempts to isolate our country in the international arena, and recent events in the global economy have shown that Islamic banks make it possible to withstand the global crisis and supplement the world financial system,” Minnikhanov said at the forum.