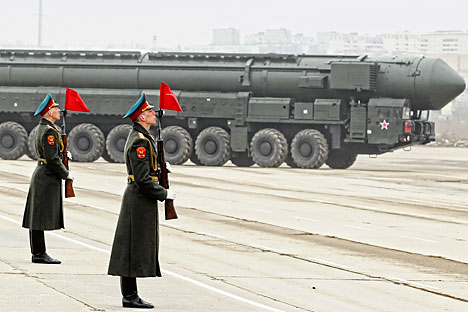 Three decades ago, the first missile complex of this type was set up for combat duty. Its entry into service was a key moment in the nuclear confrontation between the two superpowers. Despite its age, the Topol remains a key asset for the Russian armed forces.

When the first Topol was placed into combat duty, the nuclear confrontation between the USSR and USA had acquired a qualitative rather than quantitative character. It turned into the struggle of the so-called triad of nuclear weapons carriers, strategic bombers, land (silo-based) missile systems, and submarines.

Silo-based missiles, constituting the base of the USSR’s nuclear power, were vulnerable to enemy strikes, and so then the idea of creating mobile systems emerged. Initially, the Soviet leadership, like the Americans, attempted to build submarines and this triggered an arms race in the underwater world. Both sides tried to hide their missiles as deeply as possible and move them as far as they could from the enemy’s reach. Akula-type submarines (NATO name Typhoon), the largest in the world, had some drawbacks specifically due to their size.

Moreover, the Soviet naval defense system was originally in a losing position because of geographical conditions. There were many obstacles in the NATO area of Iceland – Faroe Islands (undersea cables, buoys, and mines). The USSR could only get to the ocean from the Barents Sea thanks to a large number of submarines.

And then Topols were launched as a completely new solution for nuclear war strategy. The very significance of these missile complexes was not in the tactical characteristics of the ballistic missiles, but in the possibility of perpetually being able to move them. Missiles came to the surface and roved perpetually across the land, so it was difficult to keep up with their locations.

The Topols, as mobile systems that must escape destruction from a first strike by the US, proved to be invaluable because they could be relocated even when there are no paved roads. They could be moved on regular roads or off road. This is why they remain an ‘unkilled’ part of the Russian nuclear triad and will remain in service for the near future as one of the key elements in Russia’s strategic nuclear system.

7 out of the 12 missile divisions in the Strategic Missile Forces (SMF) are currently equipped with a Topol missile system. The Teykovsky missile division was recently re-equipped with the Topol-M and Yars missile complexes. The Topol-M intercontinental ballistic missile system is a three-stage, monoblock, solid propellant missile ‘packed’ into a transport and launching container in which it can remain for at least 15 years. It has a service life of 20 years.

This is an abridged version of an article first published in Russian by Vzglyad.