A Navy Day tour of the Akula sub 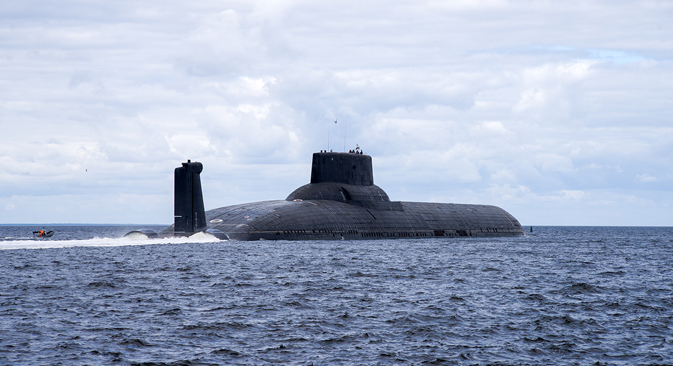 The Akula-class nuclear submarine is the biggest in the world. Source: Oleg Kuleshov

Russia celebrates Navy Day on July 26 annually, to honour the country’s naval fleet, guarding the vast coastline. Correspondent Oleg Kuleshov ventured inside the world’s largest submarine, an Akula-class vessel, the steely predator of the Northern Fleet, to mark the occasion. He discovered facets of life on board a nuclear submarine and initiation rites servicemen must undergo to become submariners.

The Dmitry Donskoi left Severodvinsk, the principal base of the Russian Northern Fleet, at the end of June, and entered the White Sea on a mission; to interact with Russia's antisubmarine forces.

The Dmitry Donskoi, an ‘Akula’(or shark)-class nuclear submarine, is a unique vessel. These Submarines (of Project 941, or ‘Typhoon’, according to NATO's classification) are considered the biggest in the world. Their length (124 metres) is the size of two football fields, while the height of this naval predator is that of a nine-storeyed building. All six ‘Akula’ submarines have found a place in the Guinness Book of World Records.

The vessel’s massive dimensions were required so they could be equipped with non-standard sized ballistic missiles, which normal submarines could not carry.

The Russian fleet today has three of the six Akula subs originally built: the TK-17 Arkhangelsk, the TK-20 Severstal and the TK-208 Dmitry Donskoi, which, after modernization work carried out between 1996 and 2002, is the most contemporary version of the Akula.

The modernization ‘refit’ included converting the nuclear-powered vessel into a towing submarine for experiments with the new ‘Bulava’ ballistic missile, which was developed for the Project 955 ‘Borei’ strategic missile carriers in the absence of launch apparatus from which experimental missiles could be fired.

Despite experiments with the Bulava missile now being complete, the Dmitry Donskoi is continuing its service in the 18th submarine division of the Northern Fleet, based at the White Sea city of Severodvinsk. The vessel's crew constantly carries out tests at sea and the submarine is currently being prepared for meeting military objectives in the open sea. 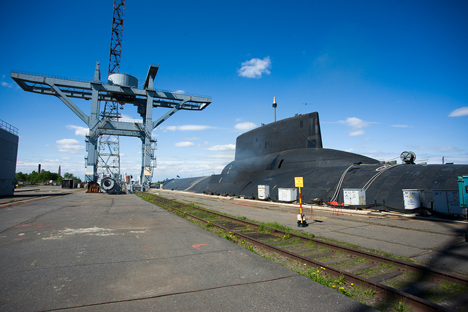 The submarine is based in the city of Severodvinsk, Arkhangelsk Region. Source: Oleg Kuleshov

The missile carrier is equipped with emergency surfacing chambers that are designed to rescue the entire crew in case of disaster. The light body is covered with a sound-absorbent rubber material, whose total weight is 800 tons. This special covering, which helps the submarine to avoid being detected, gives the vessel the appearance of a gigantic rubber toy. 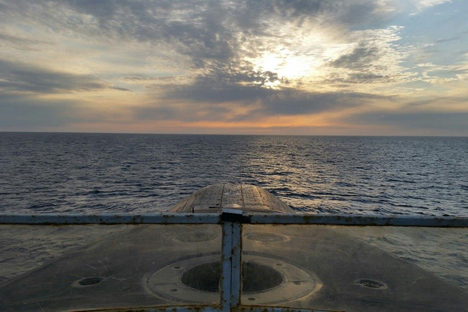 The vessel is covered with special material that helps the submarine to avoid being detected. Source: Oleg Kuleshov

From the conning tower we descend along a ramp into the submarine and enter its main command center. It is here that all the vessel's systems are controlled: the helms, missiles and radio-technical weapons. In essence this is the submarine's brain. The submariner initiation ritual also takes place here.

The submariner initiation ceremony is performed for everyone who is about to submerge, regardless of rank or position. While underwater, the sailor must drink a flacon of seawater. Then he must kiss a swinging sledgehammer, which on the Akula is a club ("bulava" in Russian), a reference to the homonymous missiles that were tested on the vessel. The most important thing in this procedure is not to be hit on the teeth. Whoever performs the ritual successfully receives a submariner certificate and, depending on the crew's mood, a present in the form of a roach, and sometimes even a "commemorative stamp" on his derrière. 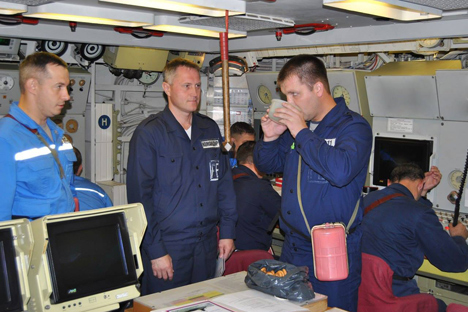 The Project 941 submarines are unique not only for their size and power, but also for the comfortable living and working conditions on board. For this the project has been named the “floating Hilton.”

Inside there is a rest area that includes a bath, a pool, a solarium, a gym and a relaxation room with a winter garden.

The exercise equipment to the left was developed by a leading nuclear submarine designer, the Rubin Design Bureau, while the one on the right was donated by patron organizations. 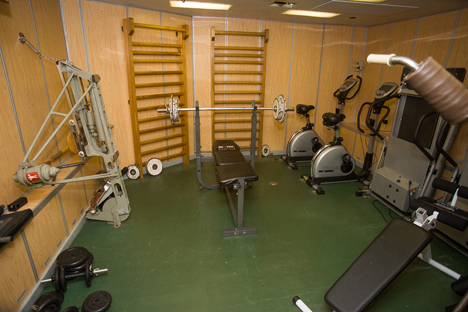 A gym inside the sub helps sailors to stay in good shape. Source: Oleg Kuleshov

The pool measures 4 x 2 meters and is two meters deep. It can be filled with fresh water as well as seawater and can be heated. 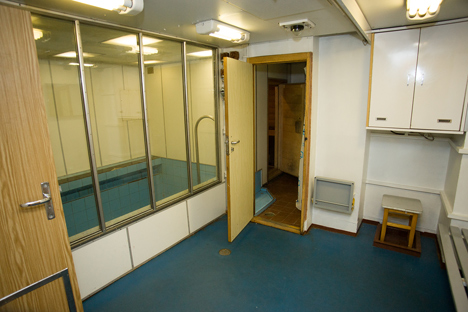 Submariners regularly visit the sauna, but more frequently the bath. At sea the service schedule is always tight – there is no time. 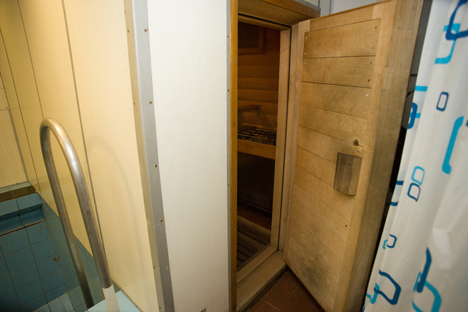 A sauna is located near the pool. Source: Oleg Kuleshov

A few years ago the Akula even boasted a little zoo – there were parrots and canaries aboard. However, the birds could not tolerate the submersion and now the submarine only has a winter garden. 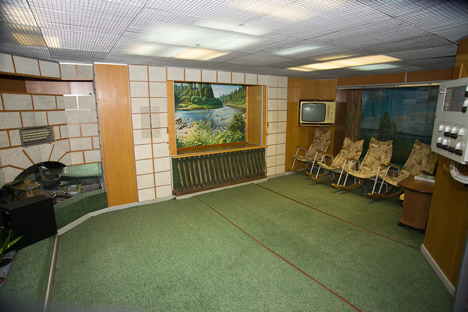 The Dmitry Donskoi contains two mess rooms. The first is for the younger crew and the second is for the officers, which also has an exhibition dedicated to the Battle of Kulikovo (the great victory won against the Mongols in 1380 by Dmitry Donskoi, after whom the vessel is named). It is in the second cabin that the submariner initiation with the club takes place. 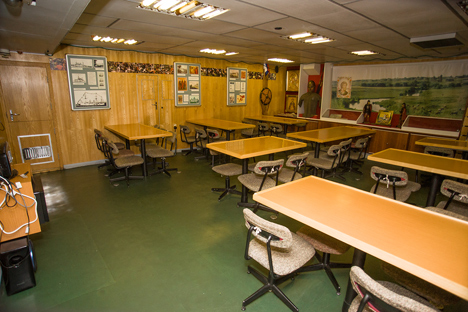 All the furniture in the mess room and in other rooms is fixed to the floor with chains in order to prevent it from rocking. 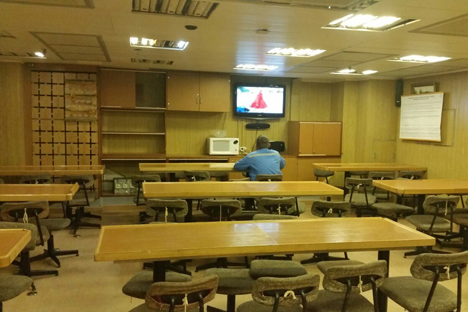 The mess for the younger crew is equipped more modestly. Source: Oleg Kuleshov 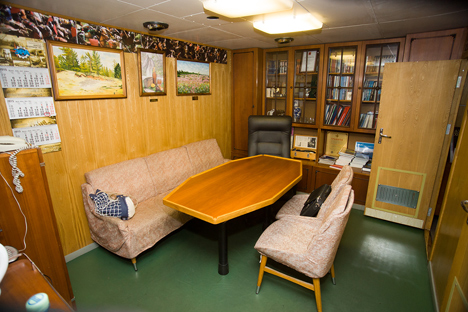 The meeting room in the commander's saloon. Source: Oleg Kuleshov

Unfortunately, it was impossible to see other areas on board the Dmitry Donskoi. Despite its respectable age, much about this gigantic submarine remains a secret and access to many areas is reserved only for military personnel. 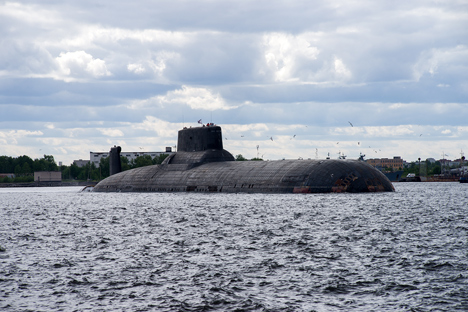 The submarine will remain in use until 2022. Source: Oleg Kuleshov

According to the plans of the Russian Fleet, the submarine will remain in use until 2022, though it is possible that it will then be modernized and continue its service.