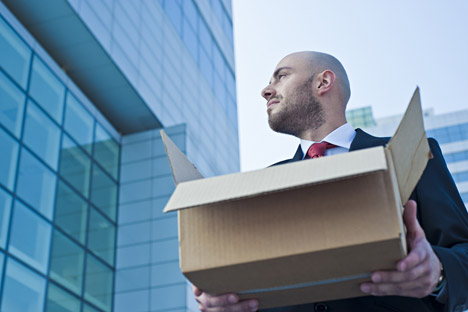 Normally, the expat is not being laid off, but his contract is simply not being extended. Source: Getty Images

Russian companies are laying off foreign workers, while recruitment agencies have noticed a growing number of expatriates' resumes. There are both economic and geopolitical reasons for these developments.

The inflow of resumes of foreign, mid-level professionals has grown by 10-15% since November 2014, Yury Dorfman, partner at Cornerstone Recruitment told RBC.

Over the past year, the number of vacancies for expatriates in Russian companies has decreased by an average of 30 to 40%, leading to such an increase in the number of resumes; “roughly 20 percent”, Galina Melnikova, CEO at Manpower Group in Russia and the CIS said.

First of all, the companies have been forced to optimize costs, said Dorfman.

According to The Expat Explorer Survey annually conducted by HSBC bank, Russia in 2014 was ranked 17th out of 34 most economically attractive countries for expats. In 2009, Russia topped the HSBC ranking of countries with highest salaries of foreign senior managers: 30% of the respondents were earning over $250 thousand per year.

“On average, an expat costs the company about 2 to 3 times more than a Russian,” assessed Dorfman. “In addition to the compensation package, expats are provided with a comfortable luxury-class home, family relocation, extended insurance and settlement of all legal formalities.”

“Besides, most of expat salaries are payable in foreign currency which, considering the current exchange rates of the US dollar and Euro, costs employers much more than, for instance, a year ago,” adds Roman Shikin, Director of Business Development at recruitment agency Kelly Services.

There is also a political dimension to the issue, Melnikova said. In some companies the expats themselves are not ready to stay, while in others the company is not ready to allow expats to occupy top positions. Another problem is the potential inability of the foreigner to work with Crimea because of sanctions.

Parting is done in a civilized way, Dorfman said. Normally, the expat is not being laid off, but his contract is simply not being extended. The expert explains that the regular contract lasts 2-3 years. If there are six months or a year left to work, it is easier for the company to continue cooperation, rather than pay a whopping penalty.

According to analysts at the Higher School of Economics (HSE), there were about 46,000 foreigners working as heads of companies, organizations and their structural units in 2013. Another 20,000 were highly qualified specialists and 21,000 mid-level specialists.

“From 2000 to 2008, the number of foreign experts from Western countries was steadily growing, having increased by 2.5 times (US) and 1.6 times (EU), but the crisis has led to the beginning of the reverse process - from 2008 to 2011 more than 66% of the specialists from the US and 64% of specialists from the EU left Russia”, Vladimir Karacharovsky and Gordey Yastrebov wrote in their report.

Sergey Solntsev, senior researcher at the Laboratory for Labour Market Research at HSE, estimates that on average, on the market between 2000 and 2009, the ratio of expats fluctuated in the range of 11.9 to 15.6%. The share of foreign top managers in Russian companies, 5 to 10%. Initially, the share of expats in foreign companies was around 37%, but during the crisis of 2008-2009 it has decreased to 25.7 -- 27.1%. Solntsev links this trend to the saturation of companies with top managers or with the growth of trust towards Russian specialists.

Marina Tarnopolskaya, managing partner at headhunting company ‘Agentstvo Contact’ confirms that the trend to replace foreign managers with Russian specialists is taking place even in the positions that were traditionally occupied by expats since the 1990s.

“For example, earlier in the company there could be only two Russians out of 12 top managers. Now, the share of expatriates in the company management is not more than 20 to 30%.”

“Despite the apparent reduction in the number of expatriates, I do not think that in the near future there will be large-scale replacement of expats,” Dorfman said.

Melnikova estimates the number of positions that can be assigned to expatriates at 30,000.