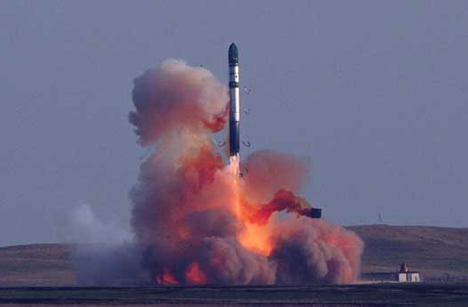 The approximate cost of a single Dnepr launch ranges between US$24 and US$30 million. Source: mil.ru

Russia plans to re-start trial launches of the RS-20 Voyevoda Intercontinental Ballistic Missile, after converting the Dnepr missile, also known by NATO as “Satan.” Russia now possesses 60 such missiles which, over the next five years, will be withdrawn from service. The plan is to use the Voyevoda missiles for civilian purposes, for commercial launches, to avoid having to destroy the expensive missiles.

The Dnepr is the converted R-36M (in various modifications) Intercontinental Ballistic Missile (ICBM). It is being offered on the market for rocket launches by the Kosmotras company, founded in Moscow, on the basis of an agreement between the Russian and Ukrainian governments. The R-36M was has been withdrawn from service since the beginning of the 1990s and has been transferred to Dnepropetrovsk (Ukraine) for conversion to launch satellites, with direct Ukrainian involvement. The military and political crisis, however, has brought confusion to Ukraine’s international space cooperation with Russia. This ambiguity has also affected the Dnepr rocket delivery programme.

Earlier, in winter 2014, Russian officials said they were reviewing Russia’s participation in this programme. However, on July 23, the Russian Defence Ministry said Dnepr rocket launches would continue, and conversion of the missiles would be undertaken by the government’s Makeyev Rocket Design Bureau at Miass, in the Urals. Kosmotras has, since spring, been denying that there are any problems surrounding the Dnepr. The company will also assist the launch of two communication satellites for the American company Iridium Communications Inc. in autumn 2015, and in 2016-2017. It is set for another five launches.

Russia has around 60 R-36 ICBMs, which are due to be withdrawn completely from service in the 2020s if their service life isn’t extended. Between 1999 and 2015, 22 launches were made (21 successful) using the Dnepr. Competition in the rocket design industry is growing both globally and within Russia, but the demand for placing satellites in orbit is also growing.

The Dnepr occupies an important niche here: with its assistance in 2003-2012, 22 % of all micro-satellites (10-100 kg) and 18 % of all nano-satellites (1 to 10 kg) have been launched. These are, so far, the best indicators within this particular segment, and the rocket itself is extremely reliable. The technology for such devices is being developed by dozens of universities and companies around the globe, enabling one to expect stable growth in their number over the next few years.

The approximate cost of a single Dnepr launch ranges between US$24 and US$30 million. If, over the next few years, the cost of delivering satellites into orbit does not markedly decrease, then these rockets have a good chance of being used through to the 2030s, as satellite delivery is an alternative use for the missiles.

Temporary replacement for the Angara

However, the withdrawal of Ukraine from the project, and the transfer of the R-36M conversion to the Makeyev Rocket Design Bureau will require company resources and will be accompanied by risks, since it will be necessary to resolve two interrelated problems: conversion of an unfamiliar rocket, and avoiding a rushed job.

Redesign work is necessary for both the R-36M’s control system (carried out by Kharkiv company Khartron), and for the upcoming launch of Iridium this autumn. The company has completed its part of the work. In Russia there are at least four companies working on the onboard electronics of the space engineering systems (including the Leninets Central Scientific Production Company, Pilugin Scientific Production Center of Automatics and Instrument Making among others). However, should their Ukrainian partners completely refuse to cooperate, this will cause a problem for them, which no one previously predicted and was not avoided in their manufacturing plans.

In any case, the six launches which have been announced for 2015–2017 must take place regardless of approaching complications, since Russia’s reputation as a provider of aero-space services is on the line. In the long term, however, Russia will be involved in perfecting and minimizing costs of the Angara launch vehicle, which could fill the Dnepr’s niche.