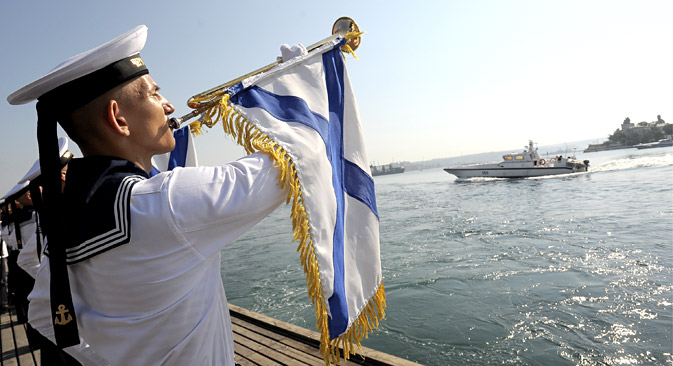 Architects of the new maritime policy have placed the main emphasis on two regions: the Atlantic and the Arctic Oceans. Source: TASS

Russian President Vladimir Putin unveiled a new maritime doctrine for the country on July 26, Navy Day, this year. The new doctrine differs from the earlier one. The author examines why a decision to adopt a new doctrine was made now.

A new maritime doctrine for Russia has been long overdue. The earlier doctrine, announced and adopted in 2001, was based on projections for two decades, till 2020. In view of how rapidly developing changes in global geopolitics over the past five years, particularly close to Russia’s borders, have become so serious, amendments to the maritime doctrine were urgently required to effectively ensure security of Russia’s maritime activities.

After detailed discussion and review at various levels, the new document, with projections till 2030, has received presidential approval.

Combat Trimarans: a promising development for the Russian Navy

“We have been working on updating the Maritime Doctrine of the Russian Federation. The main purpose of this complex document is to provide a coherent, consistent, and effective maritime policy for Russia, aimed at protecting our national interests,” said Vladimir Putin, at the launch of Navy Day celebrations, held on board the frigate Admiral Gorshkov.

Many significant changes have been introduced into the new maritime doctrine. While functional areas of the national maritime policy remain largely unchanged (in the sectors of maritime transport, development and conservation of ocean resources, scientific marine research and naval military operations), the list of the regional areas of maritime policy has been expanded – with the creation of the Antarctic as a separate zone.

“Seeing that in the last few years there have been many new developments with regard to Antarctica, this has become a very important region for Russia,” said Deputy Prime Minister Dmitry Rogozin. The other five areas remain unchanged: the Atlantic, Arctic, Pacific and Indian Oceans, as well as the Caspian Sea.

The scope of this section of the maritime doctrine has been significantly increased, and the list of long-term objectives and activities planned to implement all the major regional directions has been greatly expanded.

Architects of the new maritime policy have placed the main emphasis on two regions: the Atlantic and the Arctic Oceans.

“The Atlantic, due to the fact that in recent years, NATO has been actively developing and moving closer to our borders, and the Russian Federation must of course, develop an answer to this. The second factor is related to Crimea and Sevastopol reuniting with the Russian Federation, and measures need to be taken for the speedy integration of Crimea and Sevastopol into the national economy. Then of course, there is the restoration of Russian naval presence in the Mediterranean,” said Rogozin. “As for the Arctic, it has become more important for several reasons. This is due to the growing importance of the Northern Sea Route... In addition, the Arctic provides free access to the Atlantic and Pacific Oceans for us, which nothing can block. Then there is the very rich continental shelf, which requires careful attention when it comes to development.”

Areas of particular importance required to develop Russia as a great sea power; boatbuilding and shipbuilding; have now been incorporated as a new segment in the maritime doctrine.

“This is largely due to the fact that in the last 10-15 years, shipbuilding in our country, which in part includes military shipbuilding, has really grown in volume, and now can meet the needs of the country at a level comparable to that during the Soviet period,” Rogozin said during the celebration ceremony. “With regard to the shipbuilding for the civil and commercial fleets, here we are encouraging the establishment of private shipbuilding companies, those with a proven track record.”

“The Russian Federation, acting on the basis of its National Maritime Doctrine, is determined to consistently and firmly strengthen its position in the world’s oceans,” the final section of the new doctrine states.

There is no other path for a great naval power, which Russia has been historically.