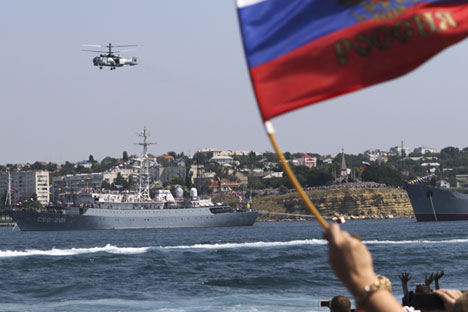 Further integration of the Crimea into a regular part of Russia will require hard work, under government supervision, but a special Ministry is no longer necessary. Source: Reuters

A special Commission on the socio-economic development of Crimea and Sevastopol has been set up by Moscow. The Commission will replace the Ministry for Crimean Affairs, dismantled on July 15 by Russian President Vladimir Putin. The government will also appoint a special working group to address economic and administrative problems in Crimea.

An official statement announced the setting up of a special Commission for socio-economic development of Crimea and Sevastopol, to replace the Ministry of Crimean Affairs, which was dismantled by presidential decree on July 15. The new Commission will be headed by Russian Deputy Prime Minister (DPM) Dmitry Kozak. The DPM has the reputation of an achiever, having earlier coordinated the preparations for the 2014 Sochi Winter Olympic Games. The Ministry, according to analysts, was established to integrate the Crimean peninsula with Russia, and it has now completed this mission, although a number of corruption scandals in the Crimea did precede the disbanding of the ministry.

“The dismantling of the Ministry of Crimea was due to the fact that it has completed its mission. This happens once in a while, depending on the tasks that the state faces at that moment,” explained Evgeny Itsakov, associate professor, Faculty of Economics and Social Sciences, RANHiGS Economic Institute, considered close to the government. According toItsakov, however, dismantling the Ministry was somewhat premature since some of the issues, like development of transportation and the state of the banking sector in the peninsula, have not been sufficiently addressed. Closing the Ministry is intended to show that the government considers the problem of Crimean re-integration generally solved, Itsakov said.

“It is clear that the process of integration of the peninsula will continue, because there is still a lot to be done. However, since the basic things have been completed, the dismantling of the Ministry for Crimean Affairs is quite logical,” said Dmitry Baranov, leading analyst of Finam Management.

The Ministry for Crimean Affairs was formed by presidential decree on March 31, 2014. Its main purpose was to fully integrate the peninsula with Russia. The Ministry was tasked with formulating a state program to develop the peninsula, and to monitor the devolution of powers from the central government to the local authorities. It has put in place a plan for development of the peninsula till 2020, for which the Ministry for Crimean Affairs requested 700 billion rubles. ($ 11.16 billion). In 2014, the Crimea was allotted 125 billion rubles ($ 1.99 billion) from the federal budget.

According to Baranov, further integration of the Crimea into a regular part of Russia will require hard work, under government supervision, but a special Ministry is no longer necessary.

“The process of Crimean integration will be controlled by the first persons of the state so, if needed, a special department for the successful completion of integration can be re-created,” Baranov said.

The disbanding of the Crimean Affairs Ministry was also preceded by several corruption scandals. In July 2015, officers of the Federal Security Service arrested Nikolay Kochanov, head of the Crimean Federal Tax Service, while taking a bribe. The same day, Andrey Skrynnik, Crimean Minister of Industry, was arrested on suspicion of assisting in large-scale embezzlement of state property. In six months, six ministers of the regional government lost their posts and found themselves under investigation.