New shot for the MiG-35 in India 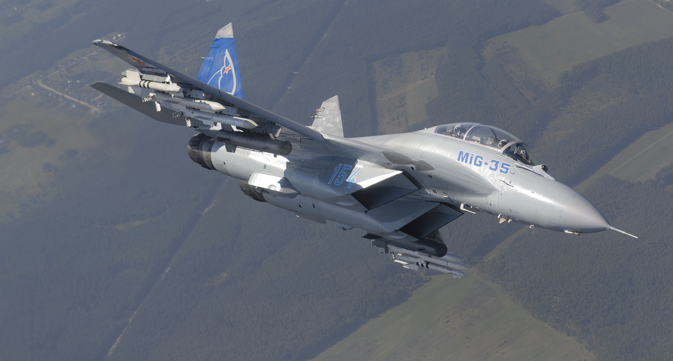 The Indian Air Force (IAF) is finalizing a new tender for purchase of medium-sized multirole fighters. The tender’s main condition is that the supplier consents to the aircraft being assembled in India. The main issue to watch will be whether the Russian MiG-35 can out-manoeuvre its French competitor, the Rafale fighter, this time around.

After the Indian government opted to buy 36 Rafale jet fighters “off the shelf” during Prime Minister Narendra Modi’s visit to France earlier this year, the Indian Defence Ministry is preparing to acquire more fighter aircraft to fulfil the needs of the armed forces.

According to the Indian news agency IANS, Indian authorities are preparing to issue an official tender proposal for the supply of 90 new medium-sized fighters for the Indian Air Force. According to IANS, participants in the earlier bid (to acquire 126 aircraft originally) for purchase of  medium multi-role combat aircraft (MMRCA), which ended with the government deciding to buy only 36 Rafale fighters, will be invited to participate in the tender. This means that the Russian MiG-35, which lost out to the Rafale bid last time, can again take part in the bid.

The first conditions for the tender were formulated back in 2005. Due to a variety of delays and coordination efforts, commercial proposals for the bid were only accepted from 2007. The IAF needed to buy 126 airplanes, for which the Russian MiG-35 (a totally revamped version of the MiG-29), the French Rafale, the all-European Eurofighter Typhoon, the Swedish Grippen, and the American F-16 all competed. It was the largest defence deal ever for India.

The MiG-35 failed to make it to the bid’s shortlist. In 2012, it was announced that the Rafale had won the tender. Later on, however, various delays and difficult negotiations between the French manufacturers and the Indian authorities began.

The Indian side was dissatisfied with the increase in the price for the lifecycle maintenance contract as well as on the price of the aircraft itself. Also, the two sides could not agree on the principles regarding the possible transfer of technology, which India insisted upon. As a result, in 2015, the contract for the supply of 126 fighters was annulled and replaced with one for the purchase of 36 fighters, which India agreed to buy in France directly.

The Indian Defence Minister Manohar Parikkar informed Parliament last week that the government has officially withdrawn the multi-billion dollar tender for the 126 Medium Multi Role Combat Aircrafts (MMRCA), for which Rafale was shortlisted in 2012.

According the IANS news agency’s sources in the Indian armed forces, all the participants in the 2007 bid should be invited for the new tender – including the Russian MiG-35. The agency’s interlocutors particularly emphasized that, following the new tender, the aircraft must be manufactured in India. This will make it one of the elements of the “Make in India” project, an ambitious programme launched by the current Prime Minister Modi, which involves bringing new technologies to India and localizing modern production within the country.

The inclusion of new defence projects in the programme still faces certain difficulties. In particular, P. Srinivasan Raghavan, Ambassador of India to the Russian Federation,said in a July interview with the Press Trust of India that, possibly, the only defence project in the “Make in India” programme will be deployment of the manufacture of the Russian Ka-226 transport helicopter to India. Now, a more ambitious and much larger project involving producing fighter planes may be part of ‘Make in India.’

United Aircraft Corporation (UAC) representatives told Gazeta.ru that they are not ready yet to comment on the possible participation in a tender that has yet to be announced. In the opinion of Russian aviation industry experts, such participation is quite likely. The opinions of the experts interviewed differed, however, regarding the chances for winning such a potential tender.

“In their defence policy, the Indians have always been distinguished by their unwillingness to put all their eggs in one basket, and the fact that they try to choose suppliers from various countries, said Ruslan Gusarov, editor of the Avia.ru website. “They are working with us on the production of the Su-30 heavy fighters, so they decided to choose Rafale for lighter class fighters. But the MiG-35 may have an advantage in the tender. India is definitely interested in technology transfer above all, and we are willing to share it more than others.” In the opinion of Gusarov, the Russian aviation market, including for military products, is not so great, so India presents good opportunities for developing promising projects.

An expert at the Center for Analysis of Strategies and Technologies, Maksim Shapovalenko regards with greater scepticism the prospects for the Russian fighter in the new competition: “The new bid is factually a continuation of the former. The project for the supply of 126 Rafale fighters fell through, primarily because of the inability to agree on a procedure for the transfer of technology to India. The French agreed to a transfer in principle; however, they refused to take responsibility for a product which would be assembled in India, rightly mistrusting the quality of assembly. I do not exclude the possibility that the new tender is just a suave way of getting the manufacturer Rafale to finally accept India’s terms.”