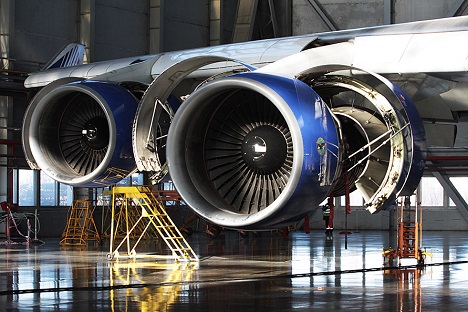 In the light of Western sanctions, Deputy Prime Minister Dmitry Rogozin has suggested that Russia renounce future cooperation with foreign companies building aviation engines; not only in Ukraine, but also with the French Snecma on the Sukhoi Superjet-100 (SSJ-100) project. According to ‘Kommersant’, for the SSJ-100 project, there will be attempts to adapt the PD-14 engine by 2018 by the United Engine Corporation (UEC). There is a risk, however, that Snecma may abandon the project, given the low volume of orders, ‘Kommersant’ sources indicated.

The Russian aviation industry may replace foreign engines with domestic ones on Russian aircrafts SSJ-100, MS-21 and the Mi-26 helicopter, and also build an engine for the Russian-Chinese heavy helicopter being designed now, Deputy Prime Minister Dmitry Rogozin said at a working meeting with President Vladimir Putin.

According to the vice-premier, “an interesting solution” has already been found. Building an engine requires more time than designing an aircraft; between three and five years, said Rogozin, so the Perm Engine Company (incorporated into ‘MC “United Engine Building Corporation”) will create a “leading reserve.”

The plant will build a new generation of engines based on the unified gas generator which “will allow it to expand that segment of aeronautical engineering with a thrust on take-off from 9 to 16 tons,” the DPM said.

Rogozin’s suggestion to give up cooperation with foreign companies was unexpected. In June, Valery Lunkov, head of the sales sector of “Irkut” corporation (developing the MS-21, part of the United Aircraft Corporation - UAC) said the PD-14 would be installed on the aircraft supplied to the Ministry of Defence and state agencies, while aircraft for commercial clients would have American GTS Pratt & Whitney engines. The SSJ-100 gets SaM-146 engines from PowerJet, a joint venture of “Saturn” and the French Snecma (part of Safran group). According to ‘Kommersant’ sources, UEC has been discussing plans to scale up investments in SaM-146.

In June ‘Kommersant’ sources said Snecma was already dissatisfied with the low and unstable flow of orders for SSJ-100 and engines (see ‘Kommersant’ from 15 June).

Snecma did not repond to ‘Kommersant’ on Tuesday. The UEC said during the project launch of the PD group of engines, it was stipulated that “the use of the unified gas generator, which would enable the creation of a whole line of promising products,” including the PD-10 with a thrust of 10.9 tons for the SuperJet” (promising model SSJ-130). UEC “needs anticipatory launch of works to create technological reserves and engine development programs.” The UAC backs the idea of Russia building its own engines, as it “will enhance the stability of industry development and will allow more added value creation in Russia.”

Rogozin asked the President to change the structure of expenditure in the defence industry, combining the technologies of ship and aircraft engine-making. According to a ‘Kommersant’ source close to the UEC executives, engines with 9 to 18 tons thrust are proposed to be built on the base of the PD-14 (six modifications are planned), while the 20 to 35 tons thrust ones will be based on the modernized gas generator NK-32.

Vladimir Karnozov, an expert with the Aviation Explorer portal said turboshaft engines for helicopters and turbojets for aircraft based on a single gas generator is unprecedented in the world, but it is technically feasible and fits into the trend of engine-building across the world. Karnozov noted that Russian industry can build power plants with high technical parameters, but it is hard to compete with foreign peers because, due to high production volumes in the world market, they can reduce the product cost per unit.