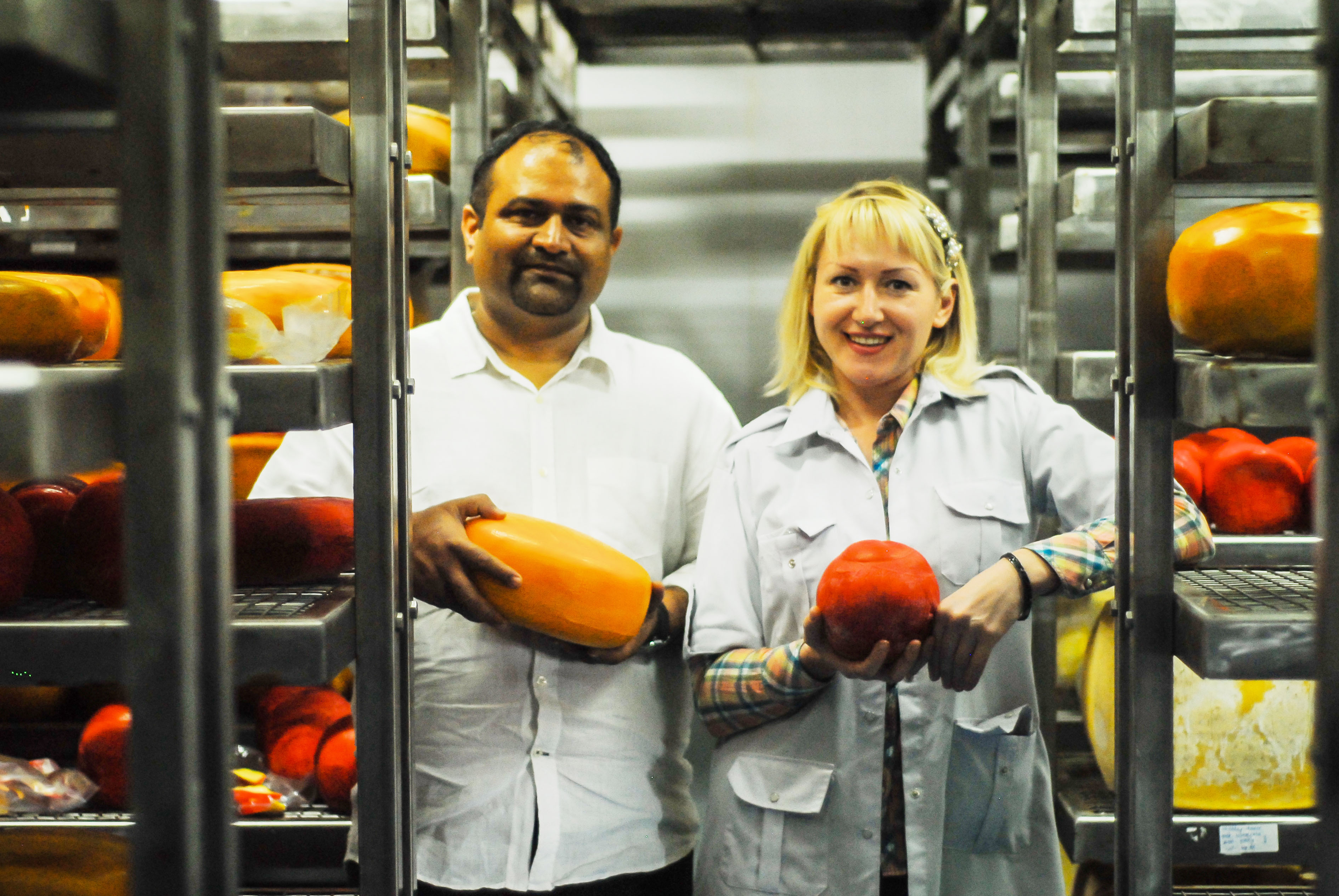 Alexandra Katz
A cheese factory in the small town of Satara in Maharashtra, managed by an Indo-Russian couple, is making European quality cheese, from gouda and cheddar to parmesan and mozzarella, that is served to gourmets all across India.

While Russian and Indian authorities are working hard to get Indian dairy products, including cheese, to consumers in Russia, Charudatta Babar and his wife Olga, originally from Dnepropetrovsk, are busy manufacturing European-quality cheese under the Corona Dairy brand at their factory in Satara, 250 kms from Mumbai.

Babar’s passion for cheese goes back to his childhood spent in Gujarat, where his father worked for Gujarat Cooperative Milk Marketing Federation (GCMMF) popularly known as Amul, the largest dairy products manufacturer in India.

“I was first introduced to cheese by Dr. A. K. Choudhary, a cheese pioneer in India. He also worked for Amul. He put that thought in my head, that's how I started,” Babar recalled.

Today he is competing with the Choudhary Cheese Bazar, a Noida-based company established by Dr. A. K. Choudhary and run by his younger brother, among few other fromage manufacturers in India.

Before starting a cheese factory in 2006, Babar worked in the family business of manufacturing cattle feed and poultry feed.  'Initially, cheese making was kind of an experiment driven by passion. It soon, however, became a profitable business.

Soon after setting up the cheese plant, Babar travelled to Australia where he completed a crash course in cheese making that helped him improve the quality of cheese manufactured at his factory. Three years later, Corona Dairy was able to expand the factory, significantly increasing the range of cheeses being produced. The factory made technological advances with quality controls set up at the highest level. 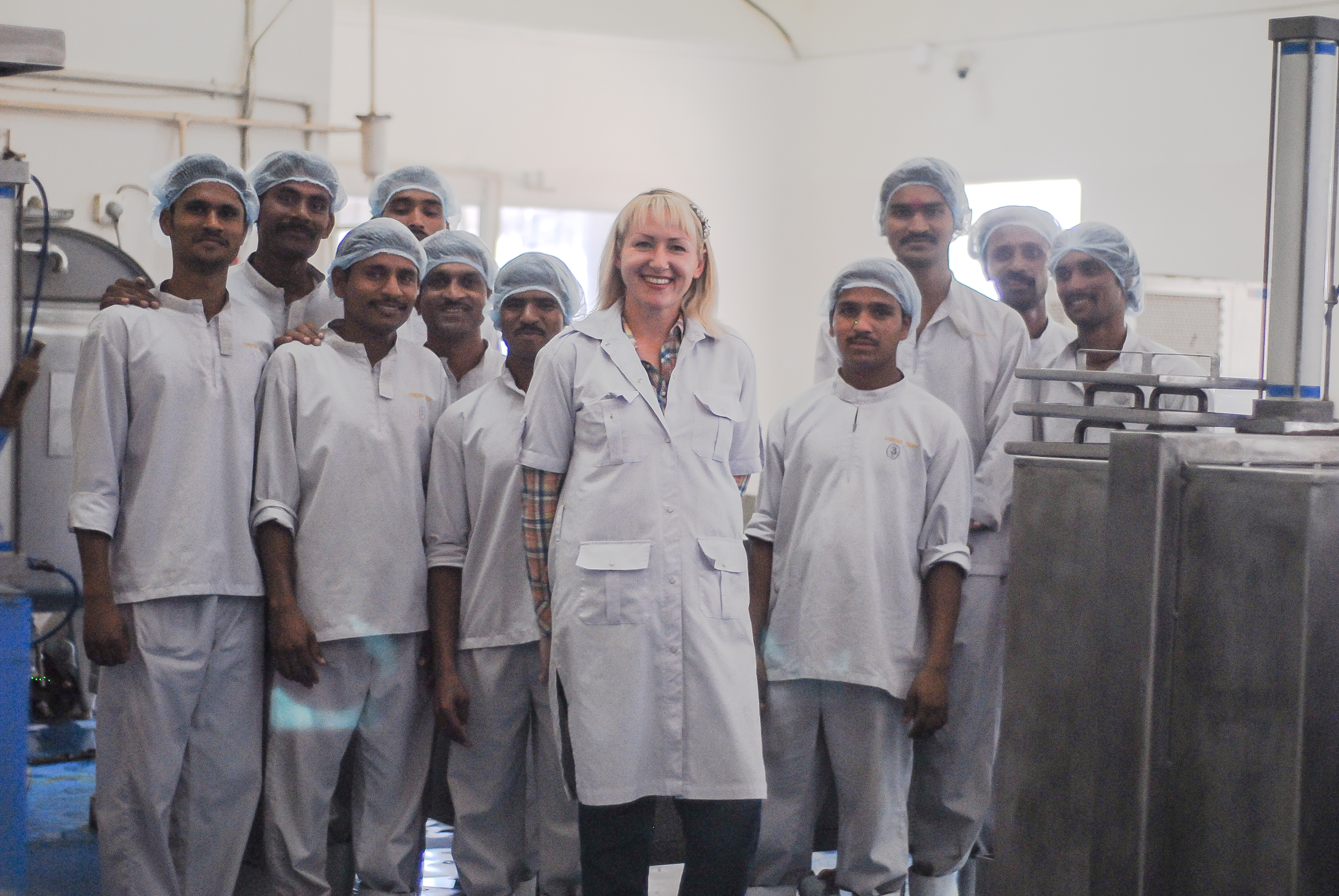 “When I first came here, the factory occupied just two small rooms”, Olga Babar said, passing the area used for packing the cheese before sending it on to customers.

“Today we have big factory with separate areas for each process. Please don't forget your overalls and shoe-covers before you enter!”

As we dress up in white robes and head caps, Olga explains the importance of keeping the cleanliness and hygienic standards at the factory, especially in India with its hot and humid climate.

Today Olga is a boss of the factory. She joined her husband in this business about three years ago when she realised that a housewife’s life would not satisfy her ambitions. Before moving to India, Olga worked in the quality control department of a large pipe plant in Dnepropetrovsk.

A journey from pipes to cheese was not that difficult for Olga who is passionate about learning new things. When cheese making became a routine, she mastered the art of beer making and now brews her own beer for home consumption.

Giving instructions to the factory workers in the Marathi language while explaining the basics of cheese manufacturing to us in English, Olga leads us from the main site of the factory where milk is being heated, pasteurised, filtered, fermented, curdled, cut, moulded and pressed to the cold room where the cheese is kept for ripening.

“Every cheese requires different time for aging. Some cheeses are aged for a month or three months, some take up to several years,” Olga said. At the factory, apart from controlling the staff and the processes, she is responsible for maintaining proper timings for each of more than 20 varieties of cheeses that Corona Dairy makes. “When you make 15 tonnes of cheese every month, it's quite a task,” her husband notes.

The factory's current output is around 9 to10 tonnes, while in winter , which is considered the best season, it goes up to around 16 tonnes. Corona Dairy's product line includes mozarella, cheddar, parmesan, gouda, emmental, edam, ricotta and mascarpone cheeses, among others.

The cheese is sold through distributors to restaurants and hotels in Ahmedabad, Surat, Mumbai, Pune and Kolhapur. Corona tied up with the Fortune Group of hotels and supplies premium cheeses to Mumbai's top rated hotels, The Taj, The Trident, Hyatt and JW Marriott, to name a few.

Until recently Goa, where Corona Dairy has its own marketing set up, was the largest market for the company, Babar said. However, the big drop in Russians tourists' arrivals last season affected cheese sales there.

Before processed cheese blocks and slices filled Indian supermarket shelves, it was only paneer that was referred to as cheese in India. According to some studies, paneer, an un-aged white cottage cheese was introduced by Persian and Afghan invaders and, for many centuries, was consumed only in the North Western parts of India. It has been not more than a decade since paneer became widely used all over the country.

The spreading fast food culture and growing popularity of pizza and pasta, especially in big cities, made processed cheese famous too. It is now the turn for Western-style cheeses.

A report by Gyan Research and Analytics in 2014 estimates the cheese market in India at US$ 237 million and predicted healthy a 20 percent annual growth to reach US$ 590 million by 2018. However, the Western-style cheese segment in India is still tiny since the major share is taken by processed cheese (which does not have much common with regular cheese) manufactured by Indian giants such as Amul, Parag Milk Foods  (“Go” brand),  Britannia Industries and Mother Dairy.

Corona Dairy is among a handful of Western-style cheese manufacturers across India serving niche customers; five star hotels, continental restaurants and expats. While some competitors, including Choudhary Cheese Bazar and Pune-based A.B.C. Farms are supplying their products to corporate customers, some other manufacturers, a Pondicherry-based La Ferme Cheese, Himalayan Products from Kashmir, The Cheese Collective and The Spotted Cow Fromagerie from Mumbai, remain small scale businesses delivering to individual clients.

Charudatta Babar says competition in this segment is unlikely to increase significantly in the next five years. “Making cheese is not easy, you need a lot of patience and many new businessmen that come into this industry don't have that patience,” he said.

Olga added, “Parmesan cheese takes at least two year to ripen, therefore, its manufacturing and sales have to be planned at least two years in advance. But the milk has to be purchased today and milk forms the largest part in the cost of cheese making.  So you are investing today and getting your profit only in 2 to 3 years when you actually sell the cheese”.

Corona Dairy has recently started selling its products through some of India's online food stores. Babar admits that the factory is working at its full capacity and has to be expanded further to be able to serve the retail market in large numbers.

For the same reason Corona has not yet been exporting its cheese abroad, although the Babars are keen on exploring the Russian cheese market that has recently opened up for new players after the Russian government banned European cheese.

“To export to Russia we need a reliable partner, someone who will be equally interested and will be able to handle food authorities there,” Babar said. He said Russia seems a prospective but very competitive market, since sanctions are probably just a temporary factor and once the ban is lifted, the European players will try to retain their position.