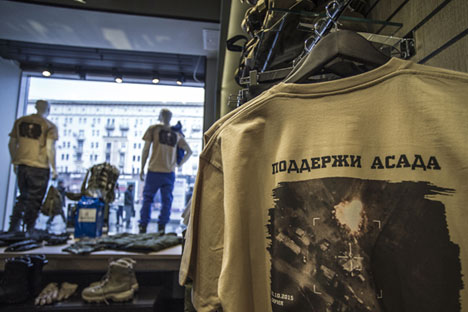 Mannequin in a shop window "Army of Russia" in Moscow.

Ria Novosti/Evgeny Biyatov
Entrepreneurs are keeping up with the times. Even those from the ‘military.’ The official boutique Armiya Rossii (Russian Army) has started selling T-shirts saying “Support Assad,” while the brand Vezhlivye Lyudi (Polite People) has moved ahead of traditional ballet and space brands.

The phrase “polite people” came into use when, in late February – early March 2014, strategic facilities in Crimea were occupied by unidentified men in camouflage uniforms with no markings or insignia. They did not engage in conversation with media representatives, but were, as the Crimeans themselves said, “very polite” to everyone. This meme quickly gained popularity, and soon a real “war” began over this. Beginning in March 2014, a number of private entrepreneurs, as well as Voentorg OJSC, filed applications to register the trademark of “Polite People”.  Companies under the control of military authorities obtained the rights to this promising brand.

Anatoly Aronov, President of the First Patent Company, who advised the first applicants, pointed out that it was immediately clear that these brands could become some of the most valuable. “Now, the ‘Russian Army’ and ‘Friendly People’ are the most powerful brands being associated with Russia. These have moved ahead of the traditional ballet and space symbols, and are today the most recognizable, particularly in clothing and souvenirs.

“Who needs a T-shirt today praising Russian ballet? However, shirts with Army motifs are in great demand, both in the domestic market and for souvenirs bought by foreign tourists,” said Aronov.

The Defence Ministry transferred to Voentorg OJSC the trademark rights to Армия России (Armiya Rossii) and Russian Army, which were registered in early 2014. The brand Voentorg had been registered in 2011.

At Voentorg, it is essential for them that people associate their name with exceptionally high quality military goods and services. The brands “Polite People” and “Russian Army” worked primarily on the image of the Armed Forces. The military holding has not forgotten the younger generation.

“During the Russian Defence Ministry Innovation Day, held on October 5-6, 2015 in the Patriot Park in Moscow Oblast, at our trade pavilions, we had available, among other things, a selection of sweets for the younger visitors; ‘Polite Bears’,” said the official representative of Voentorg OJSC.

“Now everyone loves the army”

According to the official website of Voentorg OJSC, 44 companies have signed licensing and sub-licensing agreements for the use of trademarks with this Russian Defence Ministry entity. “Legal” products under military brands are sold in 111 stores. However, this sales network covers only 22 regions of the country. One third of the stores are in the Moscow Region, St. Petersburg and Leningrad Oblasts.

Most recognizable today are the “Russian Army” stores. One was opened in St. Petersburg, and the second in downtown Moscow on Tverskaya Street, in the middle of June 2015. The opening of the new Voentorg military fashion stores were shown on all central TV channels.

“Now everyone loves the army, this is a very successful time, but how long will this wave of patriotism last? After all, if there is no external enemy, the excitement will die out, and people will remember less and less about our military,” said Aronov.

For now, there are enough enemies out there. On October 12, “Russian Army” stores started selling T-shirts with the “Support Assad” logo and pictures of Russian aviation personnel carrying out air strikes in Syria. These T-shirts are selling for 1,400 rubles, and for now, they only come in a beige color.

“However, our specialists are busy, and perhaps soon there will be other colors to choose from,” said the sales consultant. With the military staying busy, perhaps soon new themes will become available to the sellers.