Spotlight on Goa amidst tourism crisis in Russia 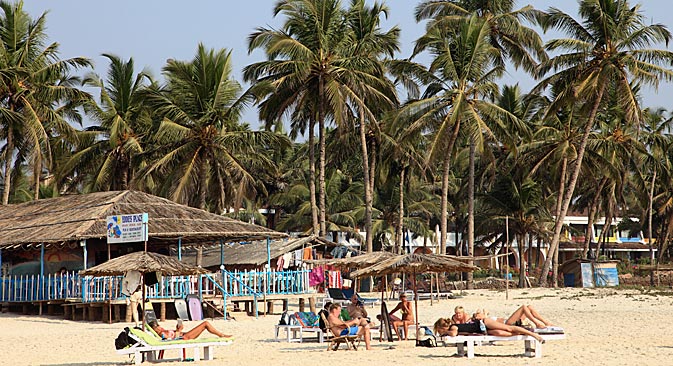 Goa has a large variety of accommodation options, from cheap guest houses and bamboo cottages to five star de-luxe suites with the highest level of service. Source: Photoshot

Tourism industry experts recognise Goa’s potential to attract many of those Russian tourists stuck in the cold Russian winter after their tours to Egypt and Turkey were cancelled. Goa needs to promote its attractions more among Russians, experts believe.

Four days later, a report by the “Times of India” newspaper stating that Russia “struck India off its safe travel destinations list” saw hundreds of publications with misleading headlines in the media. It was later confirmed that the report had misinterpreted a statement by a non-profit organisation ‘Russian information centre’(RIC) operating in Goa.

After a prompt clarification by the ‘RIC,’ the Embassy of Russia in India and the Consulate General in Mumbai, the media published disclaimers and the turmoil has turned positive for Goa. More than 400 publications stating Goa is safe for Russian tourists appeared in the Russian media in the following days.

Spontaneous publicity, even for a wrong reason, brought Goa to the spotlight of discussions in both Russia and India. “After such destinations as Egypt and Turkey popular among Russian tourists got closed for geopolitical reasons, the question now is how Goa can make good use of the current situation and pull over the tourist flow from closed destinations”, Ekaterina Belyakova from the ‘RIC’ told RIR.

Both Turkey and Egypt attracted around seven million Russian tourists last year, Russia tourism (Federal Agency for Tourism) figures state. India, in contrast, received only around 205,000 Russian tourists in 2014. In the first six months of 2015, Turkey and Egypt registered 1.3 million and 1.2 million Russian tourists respectively, placing them third and fifth in the list of countries most visited by Russians. China and Thailand were 10th and 11th in the list while Israel and Vietnam occupied 22nd and 23rd positions respectively. India was not even on the list of 25 most visited destinations for that period.

Goa Tourism has registered higher tourist movements from Russia in the past 15 days, Nikhil Desai, Managing Director GTDC, told RIR. He expects at least 250 000 Russians to visit Goa this season, about 22-25 per cent higher than last year. “If all goes well, by next year we should do better than in 2013,” he said.

Desai said relations between Russia and India is one of the reasons why Goa is popular among Russians. “We are a very competitive tourism destination and a very safe place. We are very well-connected to major cities in Russia, too. And now, with e-visa facility available for Russian tourists, Goa has become even closer to Russians,” he said.

Earlier this year, Russian and Indian officials discussed possibilities of visa-free exchange of tour groups between Russia and India, as is currently happening between Russia and China. “Tourism authorities are always interested in liberalization of visa procedures that often act as a barrier in the development of tourism exchange,” Valery Korovkin, head of the Department of International Cooperation at Russia tourism, said in an interview with RIR. Russia tourism is currently in discussions with Goa Tourism to enhance tourist flows.

Russian tour operators admit Goa is unlikely to completely replace Turkey or Egypt, all-season destinations, for many reasons. Goa can only be a winter destination for Russians as it has heavy rainfall during Russian summer vacations; it is more distant and hence a more expensive destination. Also, Goa offers a completely different concept of vacation. “Turkey is an “all inclusive” destination, but Goa so far cannot offer such a concept,” said Alena Hitrova from Anex Tour. Many tourists are now choosing Goa instead of Turkey or Egypt.

Marina Makarkova, Head of Public Relations at Coral Travels, agrees that Goa has its own limitations and peculiarities that do not match many tourists’ demands. However, she adds, some tourists who were planning vacations in Turkey or Egypt earlier will now probably choose Goa, she said. Makarkova noted that among many attractions Goa has a large variety of accommodation options, from cheap guest houses and bamboo cottages to five star de-luxe suites with the highest level of service.

Coral Travels and Anex Tours, as well as Pegas Touristik, comprise the “big three” of tour operators that focus on Turkey as a destination (all of them are controlled by Turkish capital). According to analysts, after the shutdown of tourism relations with Egypt and Turkey, these companies increased the number of charters to Goa and several other popular destinations, including Israel, UAE, Thailand and Vietnam, and started offering tour packages at extremely cheap prices, often lower than the net cost, driving smaller tour operators away.

Mid-size and small operators in Russia are generally less positive about Goa. Many of them stopped selling tours to Goa last year after the crisis caused by economic recession coupled with a wave of bankruptcies of Russian travel operators. Yuri Chekmarev, Deputy Director General of BTA Travel, said though his company used to promote Goa actively earlier, it decided to cancel all charter flights to Goa. “It was done because of the current situation in Russia and many issues within the industry, including price dumping,” Chekmarev told RIR.

While Russian industry is yet to begin recovering from the crisis, Goa, too, is recovering from last year’s losses after Russian tourist’ arrivals dropped more than 40 per cent, according to some estimates. Earlier, Russia and CIS countries contributed to over half the foreign tourist arrivals in Goa.

Although there are no official estimates of losses, industry experts said the number of Russian arrivals decreased more than 40 per cent in 2014 and it may take several years for the industry to recover. “Industry was not able to realize the scale of the crisis in time and did not take necessary steps to retain tourists by making better offers, reducing the prices for accommodation and so on,” a Goa-based tour operator, who didn’t want to be named, said. Russian analysts also point out that some problems associated with Goa, including hiked taxi fares, police harassment, stand-offs between local people and tourists and even cases of sexual abuse, are not yet resolved in Goa.

Others note that such problems exist in many countries and are not limited to Goa only. Experts say better understanding between people and less media attention to isolated cases could help Goa’s tourism industry and Russian tourists see the brighter sides of each other.

Yuri Chekmarev from BTA Travel believes despite all odds Goa has potential to attract more Russian tourists. For that, Chekmarev says, Goa tourism authorities need to promote Goa on a larger scale. “Goa tourism authorities so far have not been promoting Goa actively in Russia. It has to be massive TV and outdoor promotions and not just participation in industry events that are limited to industry professionals,” he says.

Ralph De Souza, Chairman of De Souza Group and Spokesperson of Tourism and Travel Association of Goa (TTAG), said Goa will increase promotion activities. The plan will be finalized by Goa Tourism officials and industry players at a meeting in Goa next week.