Crimea to gain energy independence from Ukraine by May 1 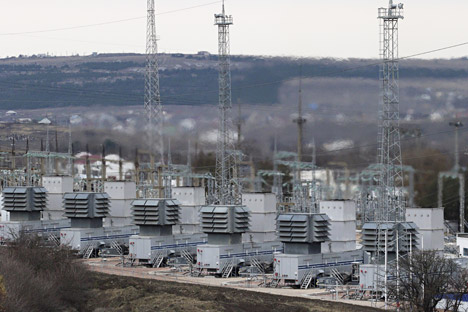 A general view shows the facilities of a mobile gas turbine generator, which was turned on due to recent power outages after pylons carrying electricity were blown up, in the settlement of Stroganovka, Simferopol district of Crimea, November 22, 2015.

Authorities of Sevastopol, a city of federal importance in Crimea, said on Tuesday the Black Sea peninsula will gain full energy independence from Ukraine by May 1.

Sevastopol Governor Sergey Menyaylo said at the meeting with the city utility service providers that Sevastopol will receive the necessary limit of electric power consumption in late February.

"By the end of February we will keep the electricity saving regime. The limit that we need will be in late February-March after the launch of a new line of energy bridge. By May 1 we will gain the full energy independence," Menyaylo said.

Crimea will get a further 450 MW and will reach the consumption level that used to be before the emergency situation occurred, the governor said.

The authorities had to declare a state of emergency in the Crimean Federal District in the aftermath of the subversive act organized by a nationalistic faction of the Crimean Tatars and far-right Ukrainian nationalists, who had launched the so-called blockade of Crimea.

The situation started improving after the commissioning of the first power line of the so-called ‘electricity bridge’ that was laid across the seabed of the Strait of Kerch from the Krasnodar territory. It went on stream on December 2.

The commissioning of a second power line of the ‘power bridge’ on December 15 increased electricity transmissions from mainland Russia to 400 megawatts. The authorities plan to bring two more power lines into operation next spring. This will make the Crimean Federal District totally independent of power supplies from Ukraine. The previous agreement on supplies of Ukrainian electricity to Crimea expired on December 31.

In December, Ukraine partially restored electricity supplies to Crimea, but Russia refused to sign a contract with Kiev for 2016 as it demanded to specify in the document that the peninsula is part of the Ukrainian territory.