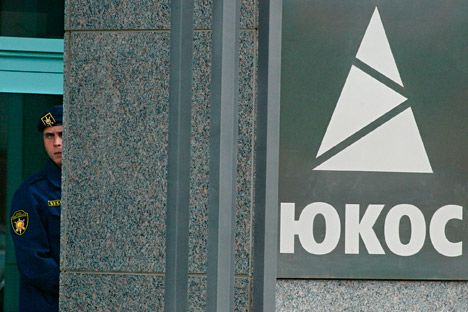 A guard looks from an entrance of Yukos oil company headquarters in Moscow, Thursday, July 22, 2004.

AP
Former owners of the defunct Russian oil company Yukos have moved Indian courts to try and claim part of the damages they were awarded by the International Court of Arbitration against the Russian government. Moscow has refused to accept the arbitration verdict of 2014 which awarded Yukos 50 billion dollars in damages.

Former owners of Yukos, the defunct Russian oil producer, have begun litigation in India as part of efforts to force Russia to pay $50 billion in damages for breaking up the company a decade ago, a representative of the owners said.

The Permanent Court of Arbitration in The Hague awarded the damages — worth around one-quarter of Russia's total government budget — to a group of shareholder companies in Yukos in 2014. The court ruled that Russian authorities had destroyed Yukos by filing massive tax evasion claims against the company after its co-owner, Mikhail Khodorkovsky, fell out with Vladimir Putin's Kremlin.

Moscow has refused to accept the decision, leading the claimants to turn to local courts in North America and Europe to seize bank accounts, shares and real estate belonging to Russia in those countries.

Last week, the ex-shareholders extended their battle to India, Tim Osborne, director of GML, a former Yukos holding company involved in the litigation, told The Moscow Times. They have petitioned a local court to recognize the $50 billion award in India and are looking for assets to target once the damages are recognized.

“Rest assured, we're not going there just because we like India,” he said. “We're there because we believe there are significant assets there.”

Targets could include the defence and nuclear energy sectors, where Russia and India have struck major deals.

Russian assets worth more than $1 billion have already been frozen in France and Belgium, and court battles are ongoing in Germany, the U.S., Britain and the Netherlands. Osborne has pledged to expand litigation into other countries in a process he expects to last a decade or more.

A spokesperson for Russia's legal team, led by lawyers White & Case, was not immediately available to comment.