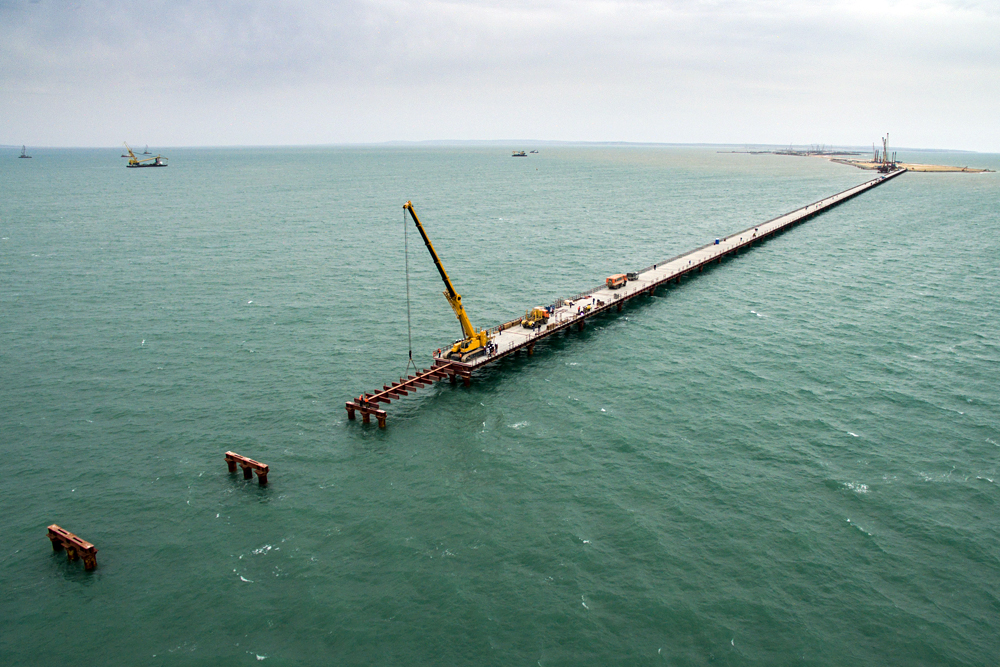 The construction of Temporary Bridge No.2 between Tuzla and the navigable part of the Strait of Kerch, at the construction site of a road-and-rail bridge which is to link Crimea to mainland Russia.

Sergei Bobylev/TASS
There is a lack of connectivity between many of the regions of the world's largest country. While citizens often lament the parlous state of Russian roads, when it comes to bridges the situation is even more serious. Why does the country have so few bridges?

After Crimea came under Russian rule, construction of a bridge across the Kerch Strait from Krasnodar has been an urgent requirement for Russia. The disputed peninsula can only be reached from the mainland by plane or ferry. The feasibility of carrying out this complex and expensive project (228.3 billion rubles, or nearly $3.5 billion) in the midst of an economic crisis has raised debate within Russian society, spreading to the problem of inadequate numbers of bridges in Russia as a whole.

Russia is the world’s largest country and has a significant amount of water resources. One of the most challenging tasks that always faced Russian rulers has been to ensure communication between different parts of their vast domain. Economic development is closely linked to good connectivity. The present Russian authorities are also aware of this aspect.

"We need to ensure, in the full sense, the transport connectedness and unity of the entire Russian territory," Russian President Vladimir Putin said in his message to the Federal Assembly in December 2012.

A report by the Institute of Transport Economics and Transport Policy at the Higher School of Economics in Moscow has compared the structure of road networks in different countries. Canada, China, Germany and the United States have neat grid-like patterns, with transport links established between all states, provinces and territories, while Russia has a radial structure, with all roads leading in the direction of Moscow, where they run into a traffic jam on the ring road around the capital.

The most expensive and important piece of road infrastructure is bridges – and Russia has more serious problems with them than with roads.

According to the latest data available from the state-owned statistical agency Rosstat, published at the end of 2014, Russia has 72,500 bridges, both road and rail. Is this a lot or not enough for a country criss-crossed by 2.8 million rivers? The United States, for instance, has 250,000 rivers and 600,000 bridges.

Official statistics on the lack of bridges in Russia do not exist, but can be assessed indirectly from two indicators: First, from the number of permanent crossings – summer and winter. A total of 257 summer and 3,500 winter crossings is quite a high figure even for such a large country (according to the data collected at the end of 2014. In comparison, the U.S., according to the 2010 census, has 485 ferry terminals).

Second, the lack of bridges can be judged by a detour index – the difference in the distance between points A and B on the ground and in the air. For example, in Moscow, the detour index accounts for 70-80 percent against 20-25 percent in Western metropolitan areas, said Andrei Mukhortikov, deputy head of Probok.net.

A view of the Zhivopisny (Picturesque) Bridge in Moscow. Source: Maksim Blinov/RIA Novosti

Mikhail Blinkin, director of the Institute of Transport Economy and Transport Policy at the Higher School of Economics, said there is no city in Russia with an indicator better than 50 percent.

To get from the regional centre of the Arkhangelsk Region to the main attraction of the region – the Solovetsky Islands (or to the nearest settlement on the land – the village of Solovetsky), it is necessary to travel around 750 miles by car, with a detour through Karelia, although the actual distance is just 150 miles (data from the public service Yandex).

Why is so little being built?

The construction of bridges in Russia is moving at a pace slower than that of the construction of roads. Between 2000 and 2014, according to Rosstat, only 200 new bridges were built. The reasons are obvious enough: Bridges are very expensive to build. The Higher School of Economics has calculated that one kilometre of regular, single-laned road costs 101.7 million rubles ($1.5 million on average), while it takes 579 million rubles ($8.9 million) to build a bridge of the same length.

A bridge over the Eastern Bosphorus Strait in Vladivostok. Source: Yury Smytuk / TASS

Spending on the road sector in Russia is generally quite small in comparison with other countries, when measured as a percentage of GDP. Russia spends less than 2 percent, while the norm for countries with a well-developed road network is no less than 3 percent, said Blinkin. If we measure the value of infrastructure assets as a percentage of GDP, Russia also is not among the leaders: 179 percent in Japan, 76 percent in China, 61 percent in Russia.

Also, costs for builders increase exponentially because of traditional Russian difficulties; the weather, distances, economic underdevelopment of regions and urbanization of the road network (roads usually pass through settlements, greatly raising the cost of land acquisition).

Crushed stone for construction of a bridge across the Tangnary river on the Vilyui highway in Yakutia was first transported almost 2,500 miles by rail from Kemerovo to the Tommot station, and then 285 miles by road to the site, said Vasily Mazur, CEO of Transsakhamost, the company responsible for building the bridge.

Despite all the difficulties, construction of bridges is big business in Russia and involves about 500 companies with a revenue volume of over 50 million rubles ($766,000). The problem is that often, more expensive projects related to various events are chosen.

For example, a total of 46 road and rail bridges were built on a new highway for the 2014 Winter Olympics in Sochi (the total value of all road works was 285.4 billion rubles, or $4.4 billion). A cable-stayed bridge over the Eastern Bosphorus Strait connected Vladivostok and Russky Island, which hosted the APEC summit in 2012, and is now used by students of the Far Eastern Federal University (32.2 billion rubles, $493 million).

Every ninth bridge in Russia is wooden. More of these are located in the Khabarovsk Territory than anywhere else – 706, or more than 60 percent of the total number. In the Arkhangelsk Region, 66 percent of all bridges are wooden, the Trans-Baikal Territory has 624 wooden bridges, or almost half, and the Irkutsk region has 569, or more than 40 percent. However, wooden does not mean bad: In some regions wood is cheap and probably the only alternative to concrete bridges that may never be built there.

This article is abridged. The full version in Russian is available here.