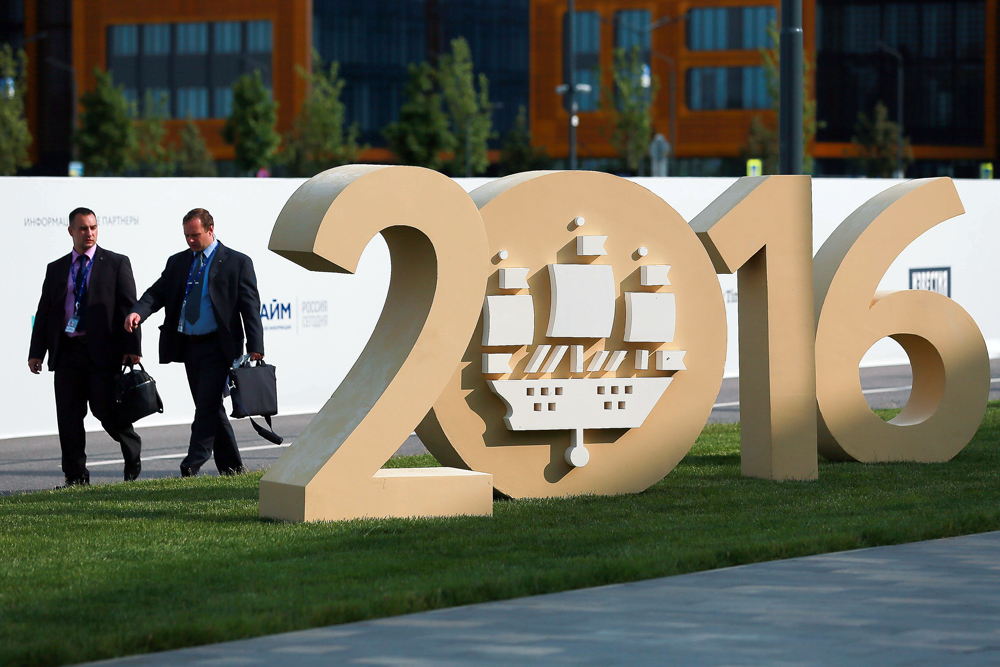 TASS
Intensive dialogue and a softening of anti-Russian sanctions are expected to be high on the agenda of this year’s forum. Also, Gazprom and Shell are expected to announce the joint launch of a major LNG plant in Russia's northwest.

According to Dmitri Peskov, Russian Presidential Press Secretary, Putin will discuss the future of the North Stream-2 gas pipeline that will run from Russia to Europe along the Baltic seabed. Another issue on the agenda of the official meetings are the mutual sanctions between Russia and the EU, introduced in 2014 because of the Ukrainian crisis.

Analysts said that even if the subject of reciprocally softening sanctions is not mentioned during the forum, direct talks between Putin and Juncker could lead to relations between Russia and the EU improving significantly. Since the Ukraine crisis began in 2014, such high level European officials have not attended the forum.

"I don't expect any kind of breakthrough, but behind-the-scenes talks can help to improve the situation in the future," remarked Timur Nigmatullin from Finam Holdings.

Georgy Vaschenko, director of operations on Russian capital markets at Freedom Finance, agrees that sanctions will not be softened this year. However, the fact that these high-ranking officials are attending the forum means that Western leaders are not united in their opinion and some of them are ready for dialogue with Russia. The Italian delegation, for example, will be headed by Prime Minister Renzi.

It is usual for many large investment agreements to be signed during the forum, including those involving international companies. Vaschenko said it was most likely that agreements would be signed in the field of energy, especially featuring gas giant Gazprom and Russia's largest oil company, the state-owned Rosneft. The value of all agreements signed will be over $4 billion, said Vaschenko.

One of the largest projects could be construction of the terminal to produce and transport liquid natural gas (LNG) between Gazprom and Royal Dutch Shell in the Russian northwest. Nigmatullin said the signing of this agreement would be the forum's major outcome.

"Currently, it is known that the total capacity of the plant's two lines will be 10 million tons of LNG annually in the first phase, with the possibility of expansion," he said. The plant is expected to start functioning at the end of 2021.

In 2016 the forum's official guest country is Italy, which is why 22 leading Italian companies will participate in the SPIEF. These include BancaIntesa Sanpaolo, tyre manufacturer LLC Pirelli Tyre Russia, the ENEL energy company, Danieli, the producer of equipment for the metallurgical industry, and others.

The Venezuelan delegation is headed by Energy Minister Eulogio Del Pino, who has meetings planned with Russian Energy Minister Alexander Novak and Rosneft President Igor Sechin. The Kaluga Region, located southeast of Moscow and famed for automobile production, will discuss the New Silk Road project with the heads of Russian Railways and Samsung, while the Moscow Region expects concrete agreements in the fields of industry, agriculture and infrastructure development.