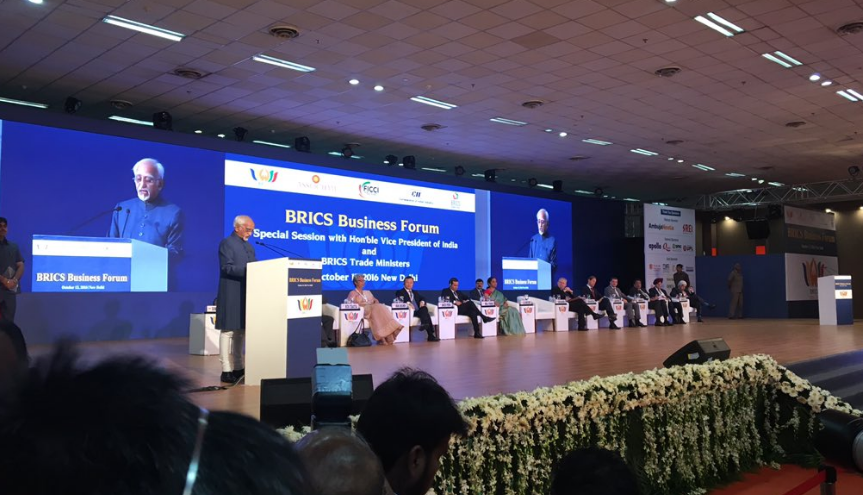 twitter@BRICS_2016
As the senior officials or ‘Sherpas’ of BRICS countries worked overtime to finalise details of the Goa Declaration, focusing on the economic linkages, the BRICS Business focused on infrastructure development.

‘Sherpas’ or senior officials of BRICS countries were meeting till late into the night in Goa on Thursday to finalise the text of the Goa Declaration and the Goa Action Plan which will be adopted by the leaders at the Summit over the weekend. Their meeting, chaired by Amar Sinha, Secretary Economic Relations in the Ministry of External Affairs and India’s ‘sherpa’, will continue on Friday, sources said, as they aim to arrive at a consensus.

The Sherpas discussed several important subjects including reform of the UN and IMF. WTO and G20 issues and progress on sustainable development goals will also feature in the final text, the sources said.

A particular focus was on how to enhance intra-BRICS trade, finance and industrial cooperation as well as BRICS cooperation in education, health, agriculture, science, energy cooperation and disaster management.

Terrorism being a common challenge faced by all BRICS countries, was an important part of the discussions, sources said. A significant part of the Declaration will be a call to concertedly fight the menace of terror and isolate the sources of funds and weaponry that the terrorists receive, a source told RIR.

Earlier, inaugurating the BRICS Business Forum in New Delhi on Thursday, Indian Vice-President Hamid Ansari outlined a five-point programme to build intra-BRICS economic linkages. The first priority was “to create a business-friendly environment for investors and entrepreneurs in all member countries, to promote mutual trade and investment; and facilitate market inter-linkages and enhance market access opportunities.”

Transforming the business potential of BRICS

BRICS, he said, would “need to foster the liberalisation of trade in Services, especially in promoting movement of people for commercial activity, both with BRICS and globally. The proposal for a BRICS visa on a long-term basis for genuine travellers, is one such effort aimed at stimulating greater economic activity by enhanced mobility of our entrepreneurs.”

Third, we need to enhance and diversify trade and investment cooperation that support value addition, Vice President Ansari said. “We also need to build resilience to external economic shocks and strengthen macro-economic policy coordination by promoting information exchange through agreed platforms and by deepening our interaction and cooperation with non-BRICS countries, international organizations and forums.”

“Fifth, we need to increase our trade in each other’s currency to further pluralize trading currencies and lessen the use of a single dominant currency. Transition to trade in national currencies will reduce the risk volatility and protect us from adverse fluctuations,” he said.

“Trade and investment are two priority areas of cooperation emphasized in the BRICS Trade and Investment Cooperation Framework. The basic principles for enhancing our trade and investment relations, is reflected in the theme of India’s BRICS chairmanship: ‘Building Responsive, Inclusive and Collective Solutions’,” Vice President Ansari said.

Over 400 companies and 1000 entrepreneurs from BRICS countries are participating in the first BRICS exhibition/trade fair. Innovation and start-ups form a very significant component of the fair to which the general public has also been given free access.

Speaking at the Forum, Likhachev congratulated BRICS for the Trade Fair and hoped the initiative would become a tradition and an incentive in furthering BRICS development work. He said that BRICS, in the near future, should focus on industries and development of localization of industries. He said the Russian delegation is going to visit the Indian state of Maharashtra and, he said, would focus on the shipbuilding and oil and gas industry sectors.

The BRICS Trade Fair showed that India was ready to unlock the BRICS potential, he said, adding that Russian representation is highest in the Trade Fair with good participation from the high-tech industry.

At the BRICS Business Forum session on ‘Cooperation in Infrastructure and Infrastructure Financing’, the panellists agreed that BRICS reflected the potential for the future. Infrastructure development is the need of the hour. There is vast opportunity for the member states and infra-financing may be encouraged through cross-country collaboration, and the New Development Bank should work on financial instruments for funding the infrastructural requirements.

Alexander Misharin, First Vice President of the JSC Russian Railways & CEO of the JSC High-Speed Rail Lines said infrastructure was of primary importance and in 2016, “we have to position ourselves to make a difference. Along with movement of people and goods, we need to have integrated solution for countries, for example, develop the silk route,” he said. “We can use the combination of roads and sea transport so that there is greater economic collaboration. New corridors of national and multinational perspectives need to be encouraged. There are different bilateral initiatives between Russia and India and Russia and China. The countries must focus on identifying possibility for advanced transportation,” Misharin suggested.

Dongwei Shi, Vice President of China’s Alibaba Group discussed infrastructure development from an ICT perspective. He highlighted how that the emergence of the internet and digital is transforming the very fabric of an economy and e-commerce has found its place at the heart of this transformation. E-commerce is one of the fastest growing segments as global B2B and B2C business on e-commerce has seen exponential increase.  Close cooperation and partnership among BRICS nations, was the key to envisage this potential, he affirmed.

The New Development Bank (NDB), which was established in July 2014, to extend loans initially to its five founding members — Brazil, Russia, India, China and South Africa, is set to offer long-term funding to other emerging economies that have a shared economic development philosophy. All the BRICS countries have made their first tranche of paid-in capital, on time and in full. To reduce exchange-rate risks on borrowings, the bank has started extending loans in domestic currencies. This is particularly important as developing countries struggle with high interest rates that are pegged to the dollar, leading to spiralling debt.