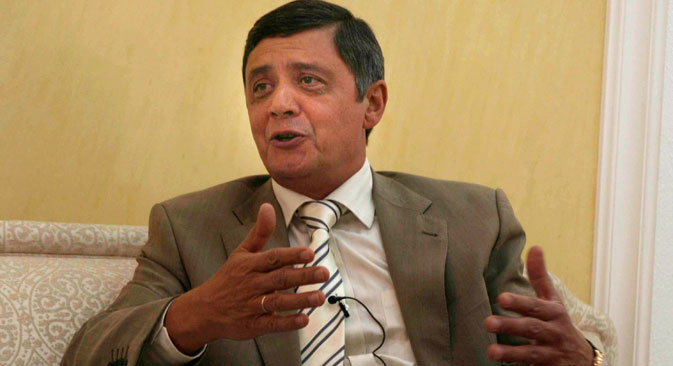 AP
In an interview with the special correspondents of RIA Novosti Tatyana Kalmykova and Polina Chernitse, Russian President's special envoy to Afghanistan and Director of the Second Department of Asian Affairs in Russian Ministry of Foreign Affairs Zamir Kabulov spoke about Russia’s plans to develop cooperation with India.

According to reports, the Russian-Indian summit might take place in late November-early December. Can you confirm this information?

I can confirm for sure that the summit will be held before the end of the year. The exact date is not so important. Traditionally, the Russian part (when it is our turn to be the hosts) of the summit always falls in December. Apparently, it will be held this time also in the beginning of  December. The summit is definitely on.

It was said that it might be moved to autumn…

There was such an idea at one time. Vladimir Putin proposed and left it to the discretion of the Indian prime minister. He promised to hold consultations, but according to unofficial reports from Indian partners, they are inclined to stick to December. Therefore, we are waiting for more specific information from them. It is not possible to do anything in a hurry, because the summit will be preceded by two major events — IGC (Intergovernmental Commission — Ed.) on trade and economic cooperation and IGC  on military-technical cooperation. They must be held  before the summit in order to prepare the specific agenda of talks between our president and the prime minister of India. Therefore, going  by this scenario, the IGC's must meet in October — November. We are ready and working on it. We hold summits every year and we have already worked out the modus operandi.

And what about the prospect of acquisition of Russian fighters by India?

Talks between India and France on "Rafale"were stalled, but they have come up with a new agreement. Now India will buy not 126, but only 36 "Rafales",  which will be delivered directly from France. The French are not ready to share the technology with the Indians, unlike us, so India will buy "ready-to-fly" Rafales".

We already have a contract even without it. The old contract is still in force, 80% of the planes in the Indian Air Force are Russian. Yes, India did have big ambitious plans for radical modernization of the Air Force, as well as the armed forces, but it involves a lot of money. If they are able to buy, they will probably float a tender, and we will also take part in this. Simultaneously, we are continuing to work with them on the fifth generation fighter aircraft. This is a long-term project.

What about the contract with Pakistan for the supply of four Mi-35 helicopters? Earlier, there were talks about large shipments?

It all depends on money. Pakistan said that they have the finances for 10-12 helicopters of this type, but negotiations are still going on. They are the buyers. At present, we are talking about four helicopters in the first phase. They need to strengthen their Air Force to fight the Taliban. Probably they would like to continue once they have mastered them. There are no obstructions.

So there may be other flgures later?

Yes, of course. Nothing has gone wrong so far. Everything rests on the availability of sufficient personnel and crew for these helicopters. They cannot be trained so quickly. Producing helicopters is easier than preparing pilots. In addition, Pakistan is also interested in other Russian weapons systems. Negotiations are being conducted.

What kind of weapon systems, specifically?

We are talking about defensive systems.

The main thing in the contract for the supply of Mi-35M is that  it will all be for hard cash.  This is not a loan as it supports our producers. They are also interested in tanks and artillery, and so on, but here we have to use caution in view of the strained Indo-Pakistani relations, even though such a contract is a minuscule deal against the background of our cooperation with India, it cannot threaten India. They have nuclear parity, but India is far ahead in all other areas.

The article is abridged. Read the full version at Sputnik.