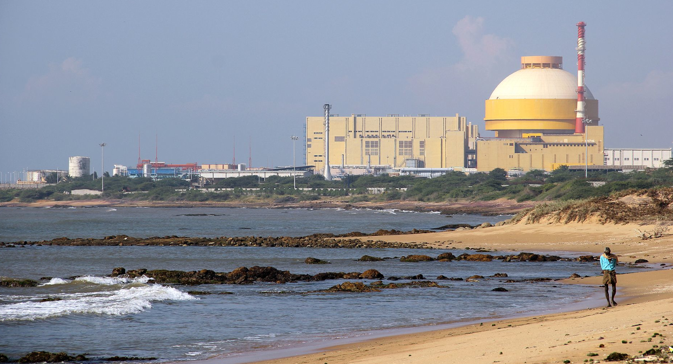 indiawaterportal.org
There will be no hike in the price of electricity generated from Kudankulam Nuclear Power Plant, Rosatom said. Tariffs will remain at the 2010-2011 levels.

The tariff for electricity generated by the Kudankulam NPP will remain at the level set by the Indian Government in 2010 – 2011, with no hikes, Russian State Atomic Energy Corporation "Rosatom" has said.

“The electricity tariff for the power generated by Kudankulam NPP is maintained at the level established by the Indian Government in 2010 – 2011, without any escalation. It is considered to be one of the most efficient tariffs in India as well as the most compatible internationally,” Natalya Kudryashova, the "Rosatom" Representative in India said.

Speaking at the India Nuclear Energy-2015 meeting in Mumbai, she added that the first Unit of the Kudankulam NPP “proves the safety and economic efficiency of the Russian-Indian megaproject”.

“The NPP has already generated 6873 million units of electricity and the turbo-generator was operated for 9267 hours. The installed capacity of the Indian NPPs reached 5780 MW. This is the first NPP in the world where the post-Fukushima safety enhancement requirements have already been implemented and are being operated successfully”, she said.

Russia is the only country that is really cooperating with India in the field of nuclear energy. In the southern Indian state of Tamil Nadu, the first unit of the Kudankulam NPP, built with Russian assistance, has been functioning successfully. The second unit is ready and should begin loading atomic fuel soon.

Construction work on the third and fourth units of Kudankulam NPP should begin in 2015. These are planned to be commissioned in 2020-2021.

The Indian Express newspaper reported recently that Russia has proposed a plan to involve India in building Russian-designed nuclear power plants in third countries, According to the newspaper, the cooperation is to be extended also to joint extraction of natural uranium and the production of nuclear fuel and atomic waste elimination.

“Russia has also offered to build over 20 nuclear power units in India, up from the 12 offered earlier”, it added. It also quotes a high-level source, saying that Moscow saw it as “long-term, mutually beneficial cooperation” in the nuclear sector.

A government source confirmed to RIR that such negotiations have taken place, and said this could lead to “joint construction of power stations and other aspects of cooperation, including the training of personnel in other Asian countries, including Bangladesh, Vietnam, and Sri Lanka”.

“This, in particular, is due to logistical issues. New Delhi is much closer to these countries than is Moscow. Moreover, our Indian partners are ready to train their Asian colleagues,” the source said.

RIR’s source also said, “Russia and India, in fact, have reiterated their commitment to cooperation in this field.”

“Cooperation in the field of nuclear energy was one of the main topics in the talks between the Indian Prime Minister Narendra Modi and the Russian President at Ufa during the July BRICS Summit. Emphasis was placed on the future construction of facilities in India, with a possible increase in the number of units.”

India is also in talks for a new location, possibly within the new state of Andhra Pradesh, where it could build a new nuclear plant with Russian assistance, RIR learned from the Department of Atomic Energy.

“Discussions between the Department of Atomic Energy (DAE) and the Government of Andhra Pradesh for location of the second Russian technology based Light Water Reactor (LWR) Nuclear Power Plant are at an advanced stage,” a source in the Department said.