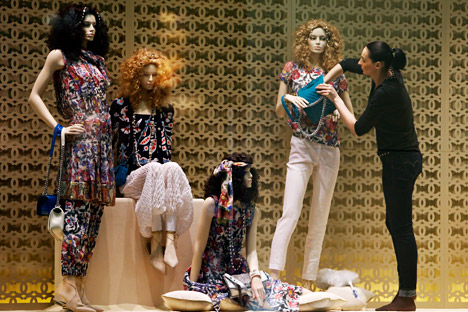 The Concept Group has 200 retail stores in Russia and CIS countries. Source: Reuters

Production facilities in China will be used to deliver clothing to India. This is the first such international collaboration for the Concept Group, a St.Petersburg-based company.

“This contract was signed in autumn, and provides for the delivery of lingerie under the brand name Infinity and children’s clothing brand Acoola. This is a three-year contract and the volume will depend on the eventual demand,” Khanik told RBC St. Petersburg.

Production facilities in China will be used to deliver clothing to India. This is the first such international collaboration for the Concept Group, noted Khanik. “India is an interesting market, it is not as saturated with products like the developed markets, but has high growth dynamics,” he said.

Speaking about AFK Sistema’s role in the contract, Khanik said, “Entering the global market is a trend that they are working on developing”. “We also share the ambition that is inherent in this large company,” he added.

In October 2014, AFK Sistema purchased a 40% stake in the holding company that owns the clothing retailer ‘Concept’ Group for around one billion rubles. Under the agreement, AFK Sistema’s share in the Concept Group could be increased to a controlling interest within three years. AFK Sistema’s share now remains at the original level.

Ivan Fedyakov, general director of InfoLine, believes that entering international markets is fully justified today, with the devaluation of the ruble, Russian companies can operate well in foreign markets.

Lars Petersson founded the Concept Group in 2004. He led projects for Russian Oodji and Gloria Jeans. Today, the Group is developing four brands; the Concept Club, Cool, Infinity Lingerie and Acoola. They now have 200 retail stores in Russia and CIS countries. Mikhail Burmistrov, general director of InfoLine-Analytics, estimated the Group’s total business as worth at three billion rubles, excluding debt of 0.9 billion rubles.