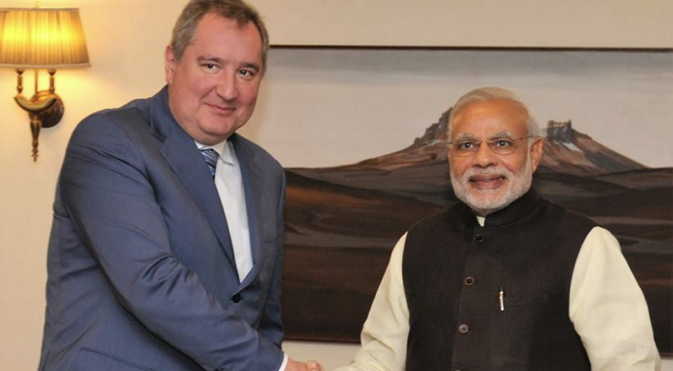 Visiting Russian Deputy Prime Minister Dmitry Rogozin arrived in India on December 8 to finalize preparations for the annual Russia-India Summit scheduled to be held later this month in Moscow. Speaking to Russian journalists after a series of substantive meetings with Indian officials and leaders, including Indian Prime Minister Narendra Modi, Rogozin said Russia had offered Indian companies a chance to replace Turkish companies in the Russian market.

“Everything that we discussed today mostly had to do with the fight against terrorism and the radical form of Islam. We know that India has vast experience in this struggle. Moreover, this experience is quite dramatic,” said Rogozin.

“At all our meetings, including with Prime Minister Modi, the Indian side expressed their condolences for the terrorist attack against our passenger airliner while it was returning from Egypt, and for with what, in effect, was also a terrorist attack; the shooting down of our bomber that was carrying out a legitimate combat mission in the airspace of Syria. On this issue, I want to say, the Indian side fully supports the efforts of Russia, including those aimed at combating the more radical manifestation of religious terrorism. I mean ISIS,” the DPM said.

“The visit of the Indian prime minister will be of a deep and substantial character. Both in terms of discussions on joint efforts to create a broad coalition against terrorism, and in terms of possible joint efforts undertaken in conditions when the two countries are not just on one side of the barricades, but occupy the leading positions in this struggle,” said Rogozin.

The crisis of international terrorism is an important, but not the main vector of development of the Russia-India dialogue. During his meetings with the Indian leadership, Rogozin, also devoted a great deal of time to economic issues, calling for both sides to work to resolve “old chronic problems” that have remained in limbo for many years.

“These are issues related to the protection of Russian investments; such as the problem in which AFK Sistema is involved and the second “titanium project”. Today, we discussed these issues, and I saw the Prime Minister of India express his desire to ensure that another determined effort is made to resolve these problems before his visit,” the visiting deputy PM said.

The settlement of these disputes will open the way for new mutual investments, and intensify trade between the two countries. Especially now, given that some European manufacturers have left the Russian market and cooperation with Ankara is collapsing, favourable conditions for Indian companies are being created.

“We believe that these vacated niches can be filled by Indian producers,” said the Russian DPM. “It may seem that we are placing more emphasis on military-technical cooperation issues, but that is no longer the case. Now we need India primarily as a large trade and economic partner.”

The trade turnover between Russia and India in 2014 amounted to just over $9 billion, which does not reflect the real potential of these two countries. In comparison, trade between India and South Korea was at the level of $17 billion.

Along with the traditional discussions, about development of the Kudankulam NPP and the construction of new nuclear power stations in India based on the Russian design, the two sides also touched upon a promising new direction: outer space.

“Today we have reached agreement on the first steps to start cooperation with the relevant agency of the Government of India. This can include the development of satellites constellations and Earth remote sensing systems. This may also involve the creation of ground-based infrastructure, including navigational constellations,” said Rogozin.

However, the two countries do not intend to limit their cooperation to just satellite technologies. Should India decide to join the Missile Technology Control Regime, Russian producers are ready to help their Indian colleagues build their own satellite delivery mechanisms to place satellites into the earth’s orbit, meaning missile technologies.

“We have a high-quality huge export potential associated with rocket engine manufacturing,” the visiting minister said.

The crucial highlight of the forthcoming summit is likely to be the signing of an agreement between the two governments that will lead to the launch of a project to construct a helicopter plant in India.

“We held detailed discussions on concrete forms of localization of Russian technologies and the production of Russian equipment within the concept of the ‘Make in India’ programme. This concerns, above all else, the large helicopter project, and all efforts are being concentrated on completing all negotiations on this issue. We hope that the corresponding agreement will be reached by December 24 (when the Indian Prime Minister reaches Moscow: Editor). It will regulate relations between the two governments to support the production of Russian helicopters in India. These are the Ka-226T helicopter models,” the Deputy Prime Minister concluded.