Gas pipeline to India being considered 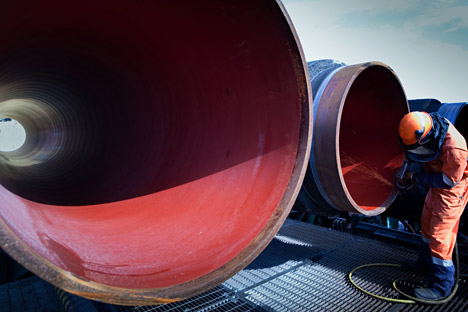 The project is interesting for India, as this could mean stable long-term sources of energy.

Getty Images
Among the topics likely to be discussed between Russian President Vladimir Putin and Indian Prime Minister Narendra Modi at their summit meeting on Thursday is the possibility of a gas pipeline from Russia to India.

The forthcoming India-Russia summit on December 24 will see the two leaders discuss construction of a pipeline which could replace both the Turkish Stream and unreliable partners in the West, with the more stable market of South Asia.

Conversations about energy supplies from Russia to India, through a pipeline, have been on for several years. However, until recently, real steps to implement this have not been taken.

The idea of ​​a pipeline to link the two countries has been around for a while but, at the official level, a definitive declaration was only made in October 2013, after a meeting between Vladimir Putin and Manmohan Singh, then head of the Indian government. Subsequently, at last year’s Russia-India Summit in New Delhi, a working group was established.

The first meeting of the Russian-Indian Joint Working Group was held in November, to study the possibility of building a hydrocarbon pipeline system connecting Russia and India.

“During the meeting, detailed discussions were held on prospects for the construction of a pipeline system from Russia to India, views exchanged on technical and economic aspects of the project, and presentation materials submitted,” noted the press service of the Russian Ministry of Energy. “In the near future, experts will meet again, this time in New Delhi”.

Experts are now considering several possible routes for the pipeline.

“A few strategies for transporting natural gas to India are being studied, including the route through the Chinese Xinjiang Uygur Autonomous Region, swapping gas supplies to Iran, as well as joining the TAPI project. The last option, by the way, is the most interesting,” said Manish Vaid, from the Observer Research Foundation (ORF) in India. “I think the upcoming visit of Indian Prime Minister Narendra Modi to Russia could accelerate the preparatory process, since it has already been discussed for a long time.”

This project is far from cheap. It is estimated that it would cost $40 billion to build. However, the financing part is not the only thing that worries the project’s supporters. The technical aspect of the pipeline, whether it will pass through the Himalayas, is no less important. However, history has examples of extended construction of pipelines in difficult terrain and climates. There is the Trans-Alaska pipeline, which is more than 1,200 kilometers long.

The oil pipeline project from Russia to India is very important for the Russian oil and gas industry. It would not only diversify its sales markets, but also make exports more stable, particularly now that the Turkish stream project is in grave doubt. Relations between India as Russia are bound by decades of friendly relations.

For India, this project would ensure a reliable source of oil and gas supplies. India is interested in implementation of the Turkmenistan-Afghanistan-Pakistan-India (TAPI) gas pipeline, the construction of which was launched on December 13. Construction of an underwater pipeline from Iran to India via Oman is also being negotiated. These are much less expensive, with TAPI estimated to cost $10 billion, while the second is estimated to cost about $4.5 billion. The joint project with Russia is not a competitor to them, but plays a complementary role, further enhancing India’s energy security. New Delhi now buys its natural gas mainly from Qatar, at a sufficiently high price. The volume of consumption in the Indian subcontinent, according to analysts, will only keep growing every year.

“The project is interesting for India, as this could mean stable long-term sources of energy. However, its fate will depend primarily on the profitability factor,” Rossiyskaya Gazeta learned from an Indian source familiar with the course of the discussions. “Recently, the Government of India has approved the acquisition by the Indian Oil and Gas Corporation of a 15 percent stake in Vankor Field from Rosneft. As soon as Indian companies create their own resource base in Russia, the question will arise as to the best method of delivery of energy resources to the Indian subcontinent. In this case, a pipeline may be the most convenient and cheapest way to go.”

Apart from the purely economic benefits, it also carries great political significance, since it would combine the power of the Shanghai Cooperation Organization, which New Delhi will enter soon, and strengthen the Russia-India-China format.