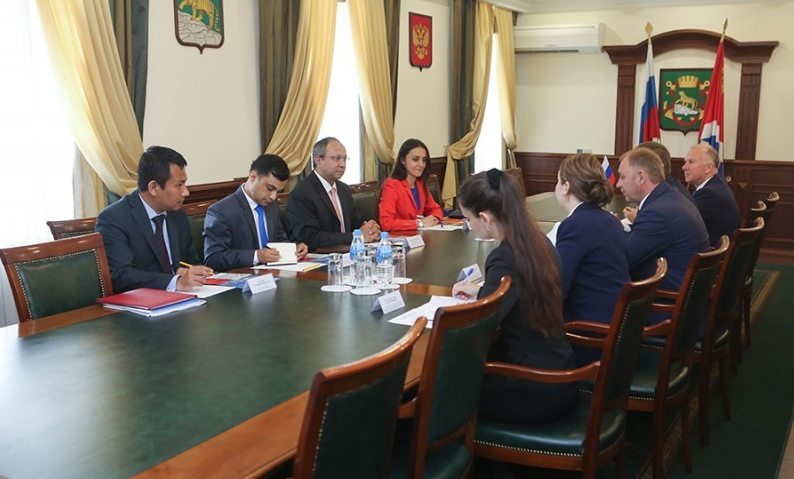 Konstantin Loboda, the acting head of Vladivostok, held a meeting with the Indian Ambassador Saran.

vlc.ru
A large delegation of Indian businessmen would visit Vladivostok, Pankaj Saran, the Indian Ambassador to Russia said, to participate in the Eastern Economic Forum to be held there on September 2 and 3. Saran was visiting the far eastern city to meet the Indian Navy contingent and the local administration.

Pankaj Saran, the Indian Ambassador to Russia, has said a large Indian delegation would arrive in Vladivostok in September for the Eastern Economic Forum, the mayor's office said.

Konstantin Loboda, the acting head of Vladivostok, held a meeting with the Indian Ambassador Saran, who had arrived in the city. The main purpose of Saran’s visit was the participation in activities of the detachment of Indian Navy warships in the capital of Primorye.

"However, he decided to expand the scope of his mission and discussed the opportunities for expanding economic cooperation at the meeting with the Vladivostok Administration, to identify areas of participation of Indian business in the development of Vladivostok,” the mayor’s office said in a statement. “Participants in the working meeting agreed that a powerful impetus for this was Vladivostok’s new status as a free port. The Indian Ambassador also said a large delegation from India would arrive in Vladivostok in September in September to participate in the East economic forum," the statement said.

The statement noted that the municipality supported Ambassador Saran’s proposal on the possibility of concluding an agreement on twin-city relations of one of the port cities of India with Vladivostok.

"Vladivostok is not just a unique city with an impressive infrastructure. It is the shining star of the Far East. I travelled on the Golden Bridge with great delight, saw beautiful scenery and buildings. I had heard a lot of good things about Vladivostok, but what I saw and what I met surpassed my best expectations", said Saran at the meeting.

The Eastern Economic Forum will be held in Vladivostok on September 2 and 3. The first such World Economic Forum in 2015 brought together more than 2,500 participants from 32 countries. A total of 109 agreements, worth more than 1.8 trillion rubles, were signed at that forum.