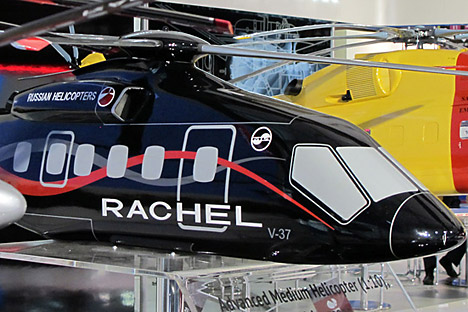 At MAKS-2015 a full scale model from the flight laboratory was on display.

Press Photo
A new, high-speed helicopter (PHH), being developed for the Russian Ministry of Defence, is due to go into production from 2022, with a likely speed of up to 500 kms/hour, Viktor Bondarev, commander of Russia’s Aerospace Forces, said. Work on the latest helicopter is on in full swing, and several technical developments for the PHH can be used for helicopters currently in service with the Russian army.

The first mock-up of this helicopter was called RACHEL (Russian Advanced Commercial Helicopter), developed by the Moscow ‘Mil’ Helicopter Plant, a part of the Russian Helicopters holding, and demonstrated in 2013 at the Farnborough Air Show (UK). At MAKS-2015 a full scale model from the flight laboratory was on display.

The demonstration model displayed at MAKS-2015 was built for flight tests of RACHEL support systems, based on the Mi-24K helicopter, and aimed at getting data for flights greater than 400 km/h, with the next increase to be up to 450km/h and faster. The Mi-24K was equipped with a special rigid, rotary wing, which is likely to be further developed into a new form of blade. The blades for the next generation design are planned for use in the production of military helicopters. 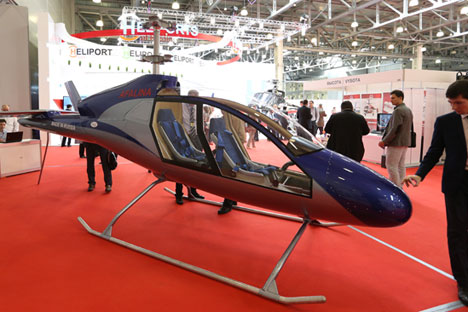 Is 'Afalina' the awaited “affordable” helicopter?

The most economical in its class

The developer has stressed on the economy and the ecology of the RACHEL helicopter, placing its speed in third place. Designed to transport 21-24 passengers, and with a maximum takeoff weight of 12 tons, the PHH should be one of the most affordable aircraft of its class, with minimal operating costs. The aircraft is designed to have a range of 900 km with an optimum loading of 2.5 ton.

The first flight of the demonstration model at the ‘Mil’ Moscow Helicopter Plant is planned for December 2015.

The RACHEL’s motor, traditionally viewed as the “weak spot” in Russian helicopter construction, will use engines produced by the Klimov Plant. Andrey Shibitov, Russian Helicopters Deputy General Director, said in a statement made on the eve of the MAKS-2015 air show, “We already have unique solutions for this engine, the unit has already been made, part of it is undertaking bench tests. We are satisfied with this engine from the point of view of having created a next generation engine”.

Alexander Vatagin, Klimov Executive Director, said last year, “it is planned to manufacture and carry out testing on a model engine and begin the certification work in 2015”. A year later the financial and economic situation in the country might affect the implementation of these plans and push the timelines to the “right”. However, it has not been ruled out that the flight laboratory for the PHH will not carry out its first flight with the new, promising engines made by Russia.

The public demonstration of the PHH at the MAKS-2015 air show is convincing confirmation that the project has not been abandoned and that work on the high-speed helicopter is actually being done.