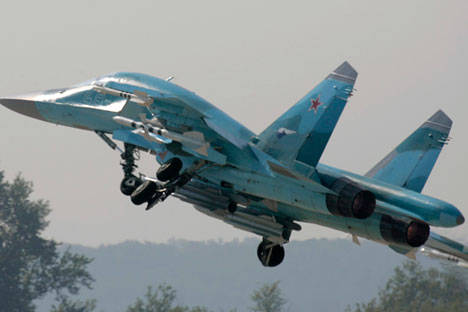 Reuters
After the Su-34s swung into action in Syria, with the whole world able to assess its combat capabilities, this fighter-bomber’s export potential has greatly increased. Potential customers could be countries in the Asia-Pacific region and West Asia.

The Su-34 fighter-bomber, a substantially modernized version of the Su-27, is a generation 4+ aircraft, designed to destroy ground and naval forces as well as air defence systems. It can perform these tasks in all weather conditions, at any time of day or night. Among the key advantages of the aircraft are the large amount of fuel they can carry, the ability to refuel in the air and the very efficient engines, all of which gives the Su-34 a real combat radius comparable to that of medium-range bombers like the Tu-16 and Tu-22M.

The Su-34 is now available only with the Russian defence services. Russia’s Defence Ministry plans to acquire 124 units of the Su-34 by 2020. Deploying it in Syria and displaying its performance under combat conditions, is likely to attract foreign buyers.

Each aircraft costs between $30 and $50 million, depending on which combat equipment options are selected.

“Among the Middle Eastern countries, likely customers are Iran and Algeria. At the same time, Iran is interested in obtaining a contract to manufacture these aircraft locally. However, creating a technological production chain would take quite a long time. If we talk about Algeria and Latin American countries, then we can consider that these might purchase small batches of these aircraft; up to 10 combat jets. For countries with small air forces, a better fit are the more versatile Su-30 jets. The Su-34 is primarily required by large air forces,” Vladimir Karnozov, an independent aviation analyst said.

The Su-34 is the best product amongcombat jets of this class, in price and quality terms, and in terms of its combat potential. The direct competitor of this Russian fighter jet, the American F-15 Eagle, has become obsolete. A Lebanese newspaper Ad-Diyar, reported last week that six Su-34 jets, flying out of the Hamim Base in Syria, in the skies over the Mediterranean came upon four Israeli F-15 fighter jets, observing the delivery of Russian weapons to Latakia. After the Su-34’s locked on to the F-15’s, the Israeli warplanes quickly left the airspace. The Su-34’s on-board radar-based security systems allows it to conduct bombing operations in Syria without threat of being shot down by ground-based air defence weapons.

“For the Su-34, the Syrian campaign primarily provides a testing ground for this new aircraft, operated by the Russian Air Force. It is being tested in real combat conditions, and is not just a demonstration of the aircraft to seek possible buyers,” independent military analyst Oleg Zheltonozhko said. “The export of these jets is unlikely these days, given that the market for such specialized aircraft of this class is much smaller, for example, than for universal fighter jets, while the Russian Air Force has a great need for these Su-34’s, given the size of our country and the growing obsolescence of the Su-24’s,” Zheltonozhko said.

“If, nevertheless, export production does start, then the most likely buyer would be Vietnam, especially in light of that country’s long-standing and good relations with Russia, their experience of operating Sukhoi aircraft, good financial situation, and tensions with neighboring states over disputed islands that are located at a considerable distance from the coast. According to past experience of other combat aircraft purchases, the first batch will most likely consist of 5 to10 jets, with the final number being determined by how much interest will develop in the future,” said Zheltonozhko.