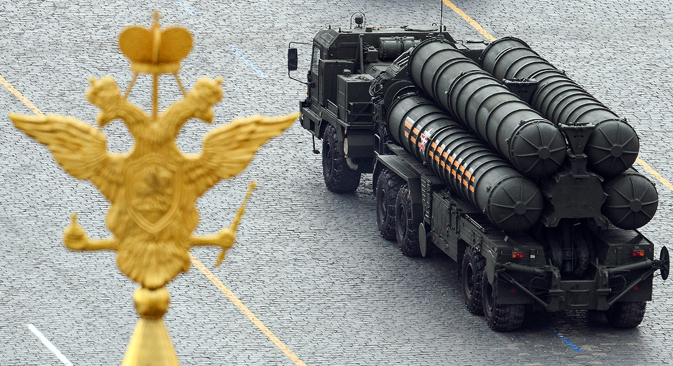 India plans to buy the S-400 ‘Triumf’ advanced anti-aircraft missile systems from Russia. According to the newspaper The Times of India, India’s Defence Ministry will consider a proposal to buy around ten S-400 systems. Delivery dates have not been specified.

The RS S-400 “Triumf” is designed to knock down aerodynamic flying targets (tactical and strategic aircraft, jammers, such as the AWACS and aerodynamic missiles), including those equipped with stealth technologies, at a distance of about 400 kms. It can also take out ballistic missiles, hypersonic targets and current aerial threats. Compared with its predecessor, the S-300, the new S-400 ‘Triumf’ has a 2.5 times faster firing rate. This is the most modern, far-reaching air defence system in the Russian arsenal. The Almaz-Antey Concern is already working on the next generation system, the S-500 but those are not ready for mass production.

India needs a modern and effective air defence system. The purchase of the S-400 systems will radically change the face and structure of the country’s defence capabilities. According to Oleg Zheltonozhko, an independent expert, the combat capabilities of the S-400 are strongly based on its complement of different types of missiles. The most important are the “long arm” 40N6E missiles, with a strike range up to 400 kilometres, up to a height of 185 km (near space), which have just been completed. With these missiles, the S-400 acquires the properties of a local missile-defence system. However, whether these missiles will be included in the S-400’s export version is not confirmed.

Even without the “long arm” in the export version, Zheltonozhko is certain that, given India’s geographic extent, by using the S-400 systems, its military can create a comprehensive defence system that will not only cover threatened areas, but the entire country. This would be so if 10-12 divisions are supplied (one division includes eight launchers, and appropriate means for detection and control, the composition of which may vary).

“India is not in a position to develop its own anti-aircraft system of this level, but requires a modern air defence system. Current and potential conflict zones are located extremely close to India,” Oleg Zheltonozhko told RIR.

If India buys the S-400 system from Russia, it will restore the military balance in the region, balancing the growing military might of China, which was the first foreign buyer of the S-400 missile systems, earlier this year. China will get six such systems by 2017, for an estimated three billion dollars.

China’s procurement of the S-400 will enable it to dominate the skies. Indian air defence systems, on the other hand, are increasingly inadequate to meet the country’s strategic requirements. The proposed deal between Russia and India will, therefore, restore some parity in the region, rather than disturbing the balance of power. “This proposed deal, to my mind, is also an indication of India’s faith in Russian defence equipment, and should remove any misgivings between the two old allies,” Amit Cowshish, Research Associate at the Institute for Defense Studies and Analyses, told RIR.

Raji Rajagopalan, Senior Researcher at the Observer Research Foundation, believes the main threat from the air does not come from China, but from Pakistan. Here the S-400 systems could effectively intercept F-16 fighter jets of the Pakistan Armed Forces. India’s primary objective in acquiring the S-400 appears to be driven by the country’s need for an anti-ballistic missile system. The assumption is that the S-400 systems can intercept missiles from Pakistan, and less so, from China. Given that China has long-range ICBMs, the ability to successfully intercept Chinese missiles may not be realized.

Procurement of the S-400 is significant for short and medium-range ballistic missile threats that India faces from Pakistan, in the regional context.

More than the economic benefit

Russian medium-range air defence weapons, both land and sea-based (like Pantsir, Buk, Tor, and Strela) are popular with foreign buyers, and in service in many countries. The sale of S-400 Triumf systems to such significant partners as India and China will help Russia gain a stronger foothold in the niche market of long-range missiles.

In addition to economic benefits, that the S-400 has been bought by two large countries will provide Moscow a military-political “bonus,” in the form of a possible coordinated air defence/missile defence system for the entire continent. The spread of Russian air defence systems will lead to improved military cooperation between Russia, India and China, says Zheltonozhko. The sale of the ‘Triumf’ to these countries makes it possible to “de facto” create a Eurasian continent-wide defence system, and facilitate interlinking of air defence systems of Russian origin in other segments (medium and short-range defence), not just in China and India, but also in third countries.

Likely acquisition of the S-400 by the Indian Defence Ministry is still at an initial stage. Since delivery times are being called “lightning fast,” the wait for them may be short.

However, limited production capacity has not allowed Russia to produce all the S-400 systems it needs. Russian Aerospace Forces have 19 divisions now, which will be raised to 56 divisions by the end of 2020.

Russia will need to find a reasonable compromise between executing foreign contracts and fulfilling its own defence needs.