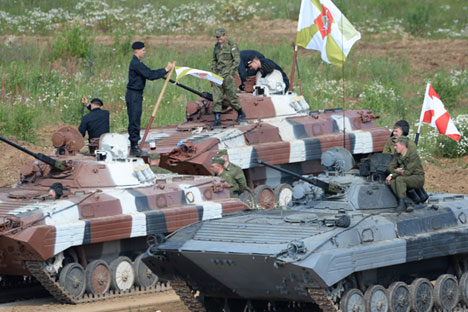 RIA Novosti/Kirill Kallinikov
A potential contract for 149 BMP-2 stipulates the licensed assembly of military vehicles directly in India at the facilities of one of the plants of the Ordnance Factory Board.

The Indian Defence Ministry on Thursday approved the acquisition of 149 BMP-2 infantry fighting vehicles to be built in the country under license from Russia, The Times of India reported.

India is set to spend over $140 million to acquire new army vehicles, according to the newspaper.

A potential contract for 149 BMP-2 stipulates the licensed assembly of military vehicles directly in India at the facilities of one of the plants of the Ordnance Factory Board, a state holding company for the production of ammunition, weapons and vehicles.

The details of the contract are due to be discussed during Parrikar's visit to Moscow, the media outlet reported, citing an Indian military source.

The BMP-2 IFV first appeared in the late 1970s. It was regarded as a product improved BMP-1. Its development commenced in the early 1970s. First prototype was completed in 1974. Many of the drawbacks of the BMP-1 were eliminated. It was accepted to service with the Soviet Army in 1980. The BMP-2 has been produced in large numbers, the Russian Armed Forces are estimated to have received some 20 000 vehicles.

The IFV was license-produced in Czechoslovakia (BVP-2) and India (Sarath). Essentially similar vehicles have been produced in Bulgaria (BMP-30) from where many were exported to Iraq.

The BMP-2 was one of the Eastern Block's most important combat vehicles numerically. It was also exported to the Soviet allies.

First published by Sputnik. Materials from Military-Today.com were used in the report.