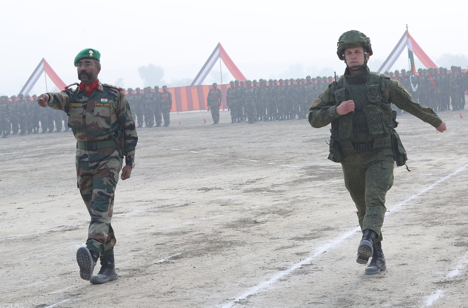 The Indra-2015 international military drills are being held in India’s state of Rajasthan November 7-20.

Tweeted by @SpokespersonMoD
Almost 500 troops are taking part in the November 7-20 Indra-2015 exercises in India’s state of Rajasthan.

According to a descriptive statement, a hypothetical group of ten militants captured two residential buildings, the press release said.

"Tactical task of Indian infantry units was to carry out a continuous clearing of the area with the simultaneous narrowing of the blocking ring, which allowed for the inspection of all [people] located in the area of operations," the statement said.

After watching the Indian team in action, the Russians displayed their approach in fighting terrorists.

In order to achieve suddenness and efficiency for the operation, the Russian command blocked the perimeter, and sent in assault groups to seize certain facilities within the test grounds, according to the statement.

Up to 250 Independent Russian Motorized Brigade troops arrived in India over the weekend to take part in the November 7-20 Indra-2015 exercises, focusing on "Counter-Terrorism Operations in Desert Terrain under a United Nations Mandate." The same number of Indian Army Infantry Battalion soldiers are participating in the drills.

The exercises are expected to move from the first "Combat Conditioning and Tactical Training" phase to the active "Validation" phase on Monday.