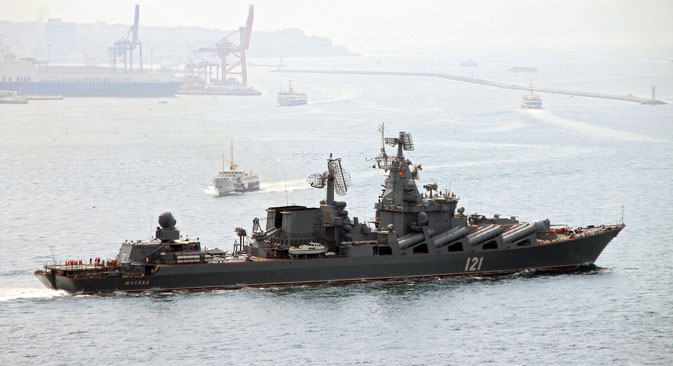 A file picture dated 07 September 2014 of The guided missile cruiser Moskva of the Russian Black Sea fleet passes through Bosporus strait 07 September 2014 near Istanbul on it's way to the Mediterranean. The Russian warship Moskva is to assist a French aircraft carrier task force in ongoing operations in Syria following Russian President Vladimir Putin's announcement on 17 November 2015 of cooperation in military strikes in that country, state media reports. French President Francois Hollande will come to Moscow for a meeting with Putin on November 26, the Kremlin said.

EPA / Vostock-photo
The ‘Moskva’, a guided missile cruiser, has been deployed near the Syria-Turkey border to defend Russian aircrafts taking part in the military campaign in Syria against aerial attacks after the recent downing of a Su-24 jet by the Turkish air force.

1. The Moskva is the lead ship of the Russian navy’s Project 1164 ‘Atlant’ class of guided missile cruisers. Its keel was laid in 1976 in a shipbuilding plant in Nikolayev (Ukraine) and named Slava ("Glory").

2. This ship is essentially a naval version of the S-300 long-range air defence system. In addition to anti-air missiles, the vessel is armed with anti-ship missiles, anti-submarine mortars and torpedoes

3. The Project 1164 cruiser has sometimes been referred to as an “aircraft carrier killer,” probably inspired by the 16 SS-N-12 Sandbox anti-ship missiles mounted on the superstructure.

4. It was used by the USSR delegation during the Malta Summit (Dec. 2-3, 1989) between Soviet leader Mikhail Gorbachev and George H.W. Bush. Stormy weather and choppy seas resulted in some meetings being cancelled or rescheduled, which gave rise to the moniker the "Seasick Summit" in the international media.

5. The Slava was recommissioned as the Moskva in April 2000, and replaced the Admiral Golovko as the flagship of Russia’s Black Sea Fleet.

6. The crew of the Moskva have all that is needed for a normal life and rest during long periods at sea; television and radio centres, a medical unit, library, cinema room, laundry, bakery, hair salon, gym and even a sauna.

7. The raised flight deck on the stern allows the operation of a Ka-25 or Ka-27 helicopter, both developed for ferrying and anti-submarine warfare.

8. The Moskva participated in the naval engagement between warships of the Russian Black Sea Fleet and Georgian patrol boats in the so-called “Battle off the coast of Abkhazia.”

This clash took place during the Russo-Georgian War of 2008 when, according to the Russian Ministry of Defense, four Georgian fast missile boats attempted to breach a "security zone" that had been pronounced around Russian navy ships off Abkhazia, which media claimed were blockading Georgia’s coast. In response, the Russian units fired on the Georgian boats with artillery. One boat was sunk and the other three were forced to withdraw. The skirmish was the Russian navy’s first real marine battle since 1945.

9. On Nov. 18, 2015, the cruiser was deployed to the eastern Mediterranean to participate in the Russian campaign in Syria. TheMoskva has been now sent to the coastal Syria-Turkey border in response to the shooting down of a Russian Sukhoi-24 bomber by the Turkish air force on Nov. 24

10. The Moskva cruiser can cover all of southern Turkey from Latakia, making sure that from now on Russian planes are safe in the air.

The cruiser’s armaments are: