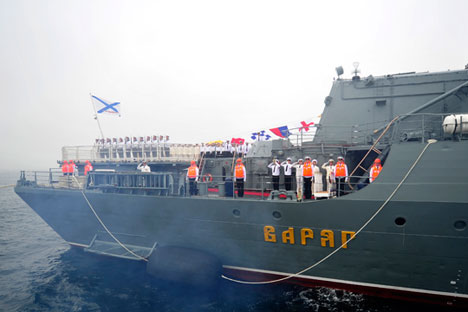 Yuri Smityuk/TASS
The eighth Russian-Indian naval exercise Indra Navy will take place in the Bay of Bengal, off the coast of India’s state of Andhra Pradesh on December 7-12.

Four Russian vessels have come on Sunday to India to participate in the Indra naval drill, a source at the Indian Navy told TASS.

The eighth Russian-Indian naval exercise Indra Navy will take place in the Bay of Bengal, off the coast of India’s state of Andhra Pradesh on December 7-12.

The exercise will practice the protection of surface ships from submarines and fire against surface and air targets.

A ship seized by a hypothetical terrorist group will be freed. Assault groups will land on board with helicopter support, the source added.

In November, Russia and India held the Indra joint ground exercise with more than 500 men on both sides taking part. Operations against armed groups and mine clearing were practiced then.

Indra is a joint, bi-annual military exercise organised by India and Russia since 2003. The word Indra is a portmanteau of the participants' respective countries. The exercise involves live firing drills, as well as air defence and anti-submarine operations. Additionally, counterpiracy operations and operations against terrorism and drug smuggling are parts of the drills.