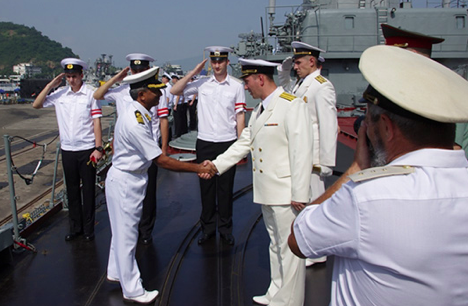 The exercise practices the protection of surface ships from submarines and fire against surface and air targets.

mil.ru
The sailors will practise antisubmarine operations and a live-fire exercise involving surface and aerial targets in the Bay of Bengal.

Russian and Indian warships have left the naval base in the city of Visakhapatnam in India’s south-eastern state of Andhra Pradesh, starting the second - active - phase of the 8th joint naval exercise Indra that ends on December 12.

Following the onshore phase (on December 7-9), the sailors will practise antisubmarine operations and a live-fire exercise involving surface and aerial targets in the Bay of Bengal. The scenario also provides for assault teams supported by helicopters to reclaim a ship seized by simulated terrorists.

Launched in quite a modest format in 2003, these naval exercises have grown into full-scale maneuvers with bigger capacity, complexity of operations and the level of participation.

In November, Russia and India held a joint ground exercise Indra with more than 500 men on both sides taking part. Operations against armed groups and mine clearing were practiced.