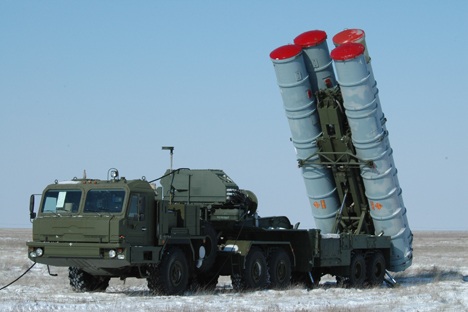 Courtesy Dmitry Litovkin
The proliferation of weapons like the S-400 and its S-300 predecessor pose a serious challenge to US and allied air power, experts say.

The proliferation of Russian air-defense systems like S-300 and S-400 may present a serious challenge to the air forces of the US and its allies, according to the National Interest.

According to the magazine, India is about to purchase five Almaz-Antey S-400 Triumf air and missile defense systems from Russia, thus becoming the second country, along with China, to obtain the weapon.

"The proliferation of weapons like the S-400 and its S-300 predecessor pose a serious challenge to US and allied air power," Dave Majumdar, defense editor for the National Interest, writes. "Both weapons systems are highly mobile, networked and can protect vast areas. Effectively, weapons like the S-400 and S-300 make an entire region inaccessible to conventional non-stealthy combat aircraft."

This "problem" is "going to get worse over time" as countries such as Iran will obtain similar weapon systems, Majumdar claims, adding that the Islamic republic has already begun to receive "a version of the S-300."

"A complete game changer for all fourth-gen aircraft [like the F-15, F-16 and F/A-18]. That thing is a beast and you don’t want to get near it," a senior US Marine Corps aviator told Majumdar regarding S-300, adding that this weapon series is a serious threat to every aircraft except for the most advanced stealth fighters and bombers.

"Only the Lockheed Martin F-22 Raptor, F-35 and Northrop Grumman B-2 Spirit stealth bomber would be able to operate inside areas protected by those weapons. But even those aircraft could be challenged if there were enough S-300 or S-400 batteries operating as part of an integrated air defense network," the author concludes.