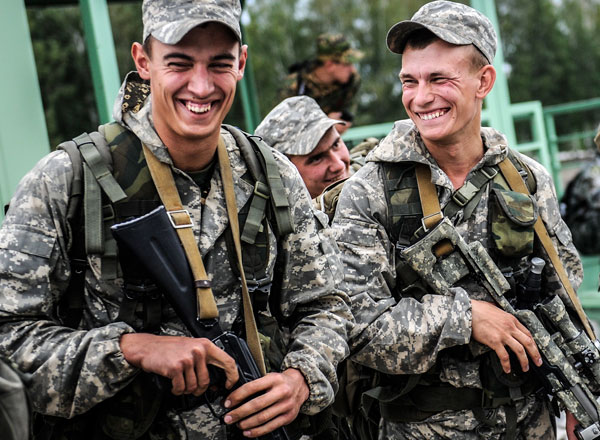 Servicemen participate in the Range Practice, a stage of the Masters of Reconnaissance competition, as part of the 2015 International Army Games.

Yevgeny Kurskov / TASS
Public attitudes to army service have changed. We look at what reforms have happened in military training, procurement, research and military education over three years.

Sergey Shoigu entered his fourth year as Russia's Defence Minister at the end of 2015. This year, Russia has played an active role in military conflicts and major training exercises, while continuing army reforms begun in 2008.

Military service in Russia has historically acted as a career boost. In Soviet times, the army was known as the Workers' and Peasants' Army, and gained a certain prestige; compulsory service lasted 2 to 3 years, and was regarded as an obligatory school for real men. With its opportunities to learn a trade, military service gave many; particularly those from rural areas; a start in life.

During the upheavals in Russia in the 1990s however, serving in the military lost its value, the armed forces received little funding, equipment was not bought, practically no military training took place, and many career officers resigned to support their families.

“In the '90s, I remember, every officer, including me, tried to wear military uniform as little as possible – it was embarrassing. Military officers then were failures. So people turned up for service in civvies,” recalls Colonel Vladimir K.

This difficult period for the Russian army lasted for over 10 years. After Shoigu's appointment as Defence Minister, military pay increased significantly, with the monthly allowance being raised over four-fold (from 12,000 rubles ($170) to 50,000 rubles ($720) for a lieutenant). The housing issue has been addressed, and most members of the forces who had waited in queue for 20 years have been provided housing.

Staging military exhibitions open to the public, and reviving DOSAAF ('Volunteer Society for Assistance to the Army, Aviation, and Navy'), which trains youth approaching the age of conscription in military occupational specialties and develops and popularises military sports (e.g. target shooting, military orienteering, and so on), have also borne fruit, and public attitudes to army service and a military career have begun to change.

In a recent WCIOM survey, 64% of the respondents said that the army was the best place for a young man to get a good moral and physical education, almost twice as many as the 33% who said much the same in a similar survey on the Soviet army in 1990. Another positive is that living conditions are also seen to have improved significantly: 60% described them as 'good', compared to just 18% in 1990.

While the military profession has become more prestigious in Russia today, serving in the army is often a springboard to a career unconnected with the military.

'I would not like my future to be linked to the armed forces. I'm planning to join the civil service or the FSB, and only people who have done army service can get in,' said Vladimir P., a sergeant at the Sevastopol military commandant's office.

A more frequent motive for serving in the army is the financial aspect. “Like a lot of people, I was tempted by the high pay compared to civilian workers. That was my main motive for joining the armed forces,” said Lieutenant Anna Z., now serving in a Moscow-based unit.

Apart from this revival of its social role, and the increased interest among youth in the military profession, the Russian army has changed in several ways in three years.

The previous Minister of Defence, Anatoly Serdyukov, decided that all Russia's military units had to be permanently combat- ready. Since then, the percentage of professional soldiers has increased every year, and the number should reach 425,000 by 2017. So many professional soldiers require constant improvement of their theoretical knowledge and development of combat skills at military training facilities.

From 2013 to 2015, there have been 20 surprise inspections and exercises, involving foreign and Russian personnel. Enhanced training skills are on display in Russia's Syrian operations.

In terms of scale, the most impressive stage of military training is the operational and strategic manoeuvres that involve tens of thousands of personnel and thousands of units of military equipment. They help Russia's military command practise a modern form of personnel deployment for any future development of the army and navy.

Serdyukov had lobbied for the purchase of more foreign-made military goods, but Shoigu has reduced such purchases to a minimum since becoming Defence Minister. An order for 1,775 Italian Iveco-LMV65 armoured vehicles was cancelled; but Russia still bought 358.

Steps have also been taken to substitute imported components with Russian-made equivalents. The conflict with Ukraine has dealt a significant blow to Russia's defence industry, forcing Russia to produce helicopter and ship engines domestically.

However, Russia intends to modernise 70% of its weaponry by 2020.

“Over a certain period we increased defence spending. <...> At that time... the status of our military hardware... was below par. Now we've brought this spending up to international levels,” said Prime Minister Dmitry Medvedev in an interview on 9 December 2015. In 2015, 50% of the Russian army's military equipment is new, so the target is achievable.

Along with an increase in the number of armoured trucks and cars of various classes, the army is getting modified BTR-82 and BTR-82A armoured personnel carriers. A decision has been made to buy BMD-4m infantry fighting vehicles. The armoured forces have been provided with tanks like the T-72BA, T-80BA, T-80UA, T-80U-E1 and T-90A. The latest models, based on the Armata heavy tank platform, will be provided in the near future.

The country's air defence forces have been given the latest ‘Triumph’ S-300V4 and S-400 surface-to-air missile (SAM) systems.

The aerospace forces have the latest Sukhoi Su-34, Su-30 and Su-35 fighter aircraft, and the Mil Mi-28N and Kamov Ka-52 helicopters. Some of them have shown their capabilities in military operations against ISIS in Syria. The air-to-surface missiles Kh-29L and Kh-101  have proven their capability.

The scheduled replacement of ground-launched ballistic missiles is also under way. Russia's Strategic Missile Troops (SMT) are getting new ‘Topol-M’ and ‘Yars’ ICBMs.

The Russian government allocates significant resources not only to providing the armed forces modern equipment and weaponry, but also to research and development.

A new federal law was passed at the end of 2013 establishing control mechanisms for the defence industry. Now, several agencies keep track of how public funds allocated to new weaponry for the army are spent, and on what.

One of Shoigu's first steps as Defence Minister was to increase the number of employees working in equipment acceptance to 25,000, to make cooperation between the military and the defence industry more effective. Representatives of the military at defence industry companies monitor product quality, which significantly reduces the number of complaints.

By presidential decree in early 2015, chief designers were put in charge of work to build strategically important systems. There will be twenty such designers, with enhanced status and responsibilities. Russia's defence industry has returned to a Stalinist command system: in the Soviet era, chief designers heading the design offices had the prerogative of deciding the direction of R&D on creating advanced technology.

The Soviet structure of the armed forces was completely dismantled in the 2008 military reforms under Serdyukov. The large divisions, which were complicated to command, were replaced by mobile brigades, meeting modern warfare requirements. The army itself is becoming more professional and gradually moving away from universal conscription. There are now more professional members in the forces than conscripts.

Russia is not in a position to abolish conscription altogether: its economy today cannot support a fully professional army. The number of professional members of the forces is 400,000 less than the million proposed by the country's military leaders. The USA apart, no other country today has the capacity to maintain a professional army of a million soldiers.

Unconventional methods are being used to increase the numbers. 'Research squadrons' have been set up in the army, where conscripts can work in defence research during their military service. The Defence Ministry expects that these soldiers will be more willing to sign professional contracts after completing their compulsory service.

From 2010 to 2012, some higher military education institutions stopped taking in new students (because of the reduction in the number of officers in the armed forces), but are now accepting them again.