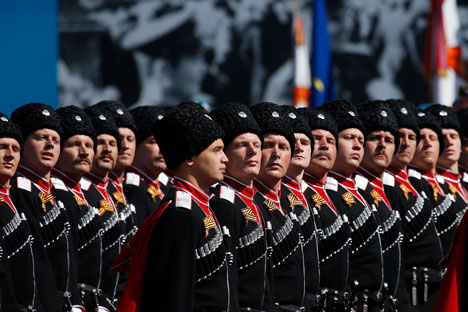 Reuters
A new chapter in the history of the Russian Cossacks began when President Boris Yeltsin set up the Main Directorate of Cossack Troops, as part of the Cossack revival in Russia, on January 23, 1996. As Russia's modern Cossack troops mark 20 years of maintaining order, we look at what they do, whom they answer to, and how they are armed.

The Cossacks first appeared in the 15th century and were, over time, co-opted by the state. In Europe, people still talk about the Cossack forces who took Berlin and Paris. There was no war in which the Cossack troops would not take part. However, the system of Cossack self-government was abolished from 1920 by a decree of the Council of People's Commissars.

Cossack troops today are a separate branch of Russia's Armed Forces. answer to the Supreme Commander-in-Chief of the Russian Federation. Military administration of the Cossack troops is the job of the Main Directorate of Cossack Troops, headed by a Cossack general, under the Russian Ministry of Defence. The military districts have military district directorates of Cossack troops, whose job it is to administer and train units and keep a record of the Cossacks; both those doing military service and those living in the district.

Russia's leaders are doing everything to give the Cossacks greater social significance in Russian society. To this end, the Cossacks take part in combat and peacetime missions. As it happens, the latter most popular with the public, as the Cossack troops are a relatively young institution and, unlike the police, have not been involved in corruption and scandals.

In peacetime, the Cossacks' job is to guard and protect Russians, as well as the interests of the state in various areas, from protecting state property to forest protection. In wartime, the Cossack troops become genuine military units, capable of carrying out military actions and dealing with the same challenges as other Russian troops.

From horses to self-propelled guns

The Russian Union of Cossacks today comprises around one and a half million people in all its military organizations.

Read more: The free Cossacks: A special breed of Russian