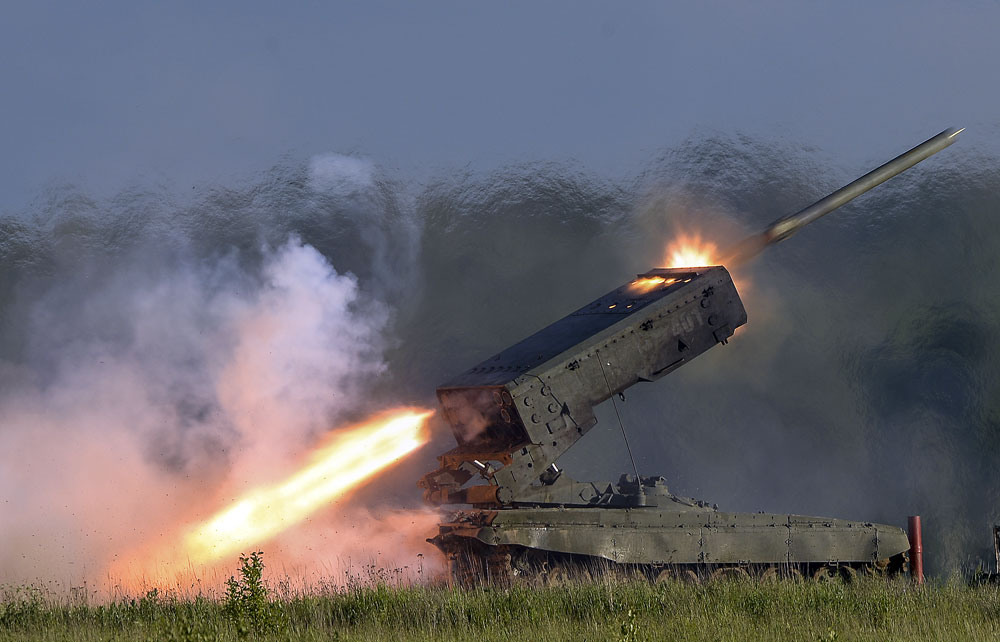 Alexander Vilf / RIA Novosti
Order books for the Russian defence industry currently stand at $50 billion. Russia is seeking to raise those orders and use arms sales to compensate for the steep drop in oil prices. This strategy may work out, since Russian military equipment has been used in actual conflict, increasing its appeal for potential customers. We present the top 5 items of battle-tested Russian military equipment.

The workhorse of the Russian Air Force in Syria is the Su-34. Equipped with state-of-the-art location and strike systems, the aircraft is bombing enemy targets while staying high enough to be out of the reach of the Manpads with which the enemy is well armed. The Syrian conflict is the Su-34’s first experience of battle. Given the effectiveness with which it is fulfilling its military objectives, destroying enemy camps and their infrastructure, it is likely that other countries will soon be using it as well.

Vladimir on the march: the T-90A

Russia's newest main battle tank, the T-90A,’ Vladimir,’ is now being used by the Syrian army against its enemies in open battle. Equipped with powerful front armour and the cutting-edge Shtora-1 electro-optical active protection suite and Ainet remote destination system, the T-90A is more preferable in the heat of battle to the upgraded T-72B3. The latter might be bigger, but its combat capabilities are not as good as those of the "Vladimir" (as the T-90A is known, after its chief designer, Vladimir Potkin).

Burning everything in its path, the TOS-1A "Blazing Sun" heavy flamethrower system has seen action in two conflict zones: Syria and Iraq. The "Blazing Sun" gives its enemies no chance of survival. It is impossible to escape or hide from. In open spaces, its thermobaric warheads leave scorched deserts over hundreds of square metres, while it is even more deadly in urban locations.

The Mi-28N is an attack helicopter and "younger brother" of the classic Soviet Mi-24. Mi-28Ns are destroying enemy positions near Latakia, where the Russian airbase in Syria is located, with auto-cannons and unguided rockets. Iraq uses them to ambush ISIS troops near Baghdad. Nimble and mobile, they are difficult for the enemy to train their weapons on: in the time it takes to aim, the Mi-28N flies off. Firing Manpads at them is not an option: the Mi-28N has a cutting-edge countermeasure system.

Enemy tanks, armoured cars, other helicopters and unmanned aircraft are easy targets for the "Night Hunter," or "Havoc" as it is named by NATO. The helicopter is equipped with 30-mm NPPU-28 fixed-mounted flexible guns, Ataka-V anti-tank missiles, air-to-air missiles and ceramic cockpit protection, enabling it to withstand a direct hit by 20-mm projectiles, making it an impregnable fortress.

The BMP-3, an infantry fighting vehicle, had its military baptism 20 years ago, but is showing its effectiveness even now, with the United Arab Emirates is using it in Yemen.

Fighting alongside French-made Leclerc tanks, the BMP-3s have been destroying targets with their 100-mm guns and 30-mm auto-cannons by day and night (using night vision devices and thermal sights).

The BMP-3's main advantage however, does not lie in its weaponry but in its superior mobility and protection. The BMP-3's engine is at the back, as in a tank, ensuring a smooth drive with no tipping forwards, so the driver has a better field of vision and the gunner can aim more accurately. Owing to this unconventional engine position, compared to other infantry fighting vehicles, troops enter or leave through the back, with the hatch up. This provides them extra protection, saving hundreds of lives on the battlefield. The BMP-3 is seeing action in the sands of Yemen. Other foreign buyers have shown keen interest in it.