Russia and France in running for new Indian carrier

The Indian Navy had sent a request for construction of an aircraft carrier to four potential contractors.

AP
India is likely to shortly float a tender for a new aircraft carrier, with 54 aircraft on board, according to the French military newsletter TTU. Russia and France would be the primary contenders in the reckoning.

India intends to announce a tender for purchase of a new aircraft carrier with 54 aircraft aboard, the French military newsletter TTU stated. According to the publication, the Indian Navy is seeking to purchase an aircraft carrier with a total displacement of 65,000 tons, length of 300 metres, width of 70 metres, and equipped with a nuclear power plant.

According to the Russian military blog bmpd, maintained by employees of the Centre for Analysis of Strategies and Technologies (CAST), India is planning to build another aircraft carrier, to be called the ‘Vishal,’ in a domestic shipyard, with foreign assistance.

According to the blog, the main contenders for this contract are France and Russia, because the tender conditions would stipulate compatibility of the air wing of the future ship with the aircraft already in service with the Indian Air Force and Navy. This condition among carrier-based fighters can only be met by the Russian MiG-29K, currently used on the Russian-built Indian aircraft carrier ‘Vikramaditya’, and the French Rafale M, harmonized with the land modification of this machine, which the Indian Air Force will be buying in the near future.

It is possible that a carrier-based version of the fifth generation fighter FGFA, currently being designed for the Indian Air Force, could be built in the future, based on the Russian T-50 project (Prospective Airborne Complex of Frontline Aviation – PAK FA). Earlier in February, a report came out on development of a carrier-based variant of the fifth generation fighter aircraft for the Russian Navy (Prospective Airborne Complex of Ship-borne Aviation – PAK SA).

Information was released in the summer of 2015 that claimed the Indian Navy had sent a request for construction of an aircraft carrier to four potential contractors, among which were Russia, France, Britain, and the United States. 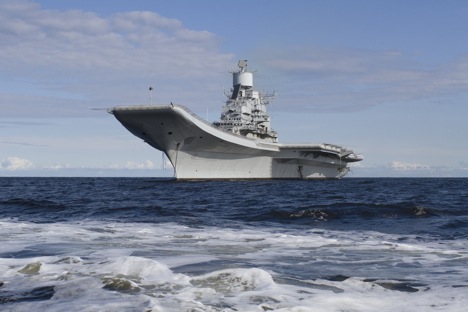