Russian Ka-226T production in India could begin in 2017 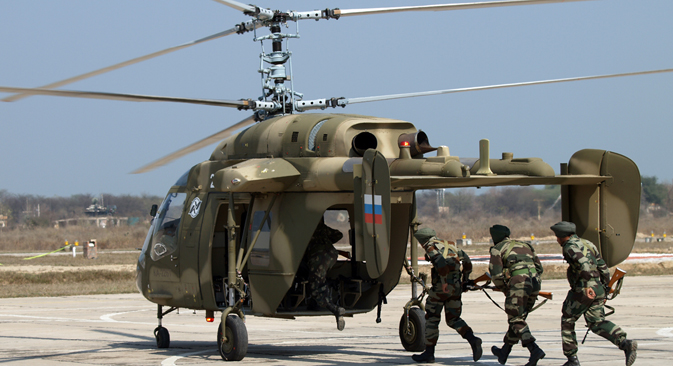 The Ka-226T is a light, twin-engine multi-role helicopter offered by Russian Helicopters, for military and civilian missions.

Russian Helicopters
Sixty aircraft will be supplied to India assembled, and another 140 are planned to be assembled at Indian production facilities.

The production of Russia’s light utility helicopters Kamov Ka-226T in India may begin next year, director for international cooperation and regional policy of the Russian State Corporation Rostec Viktor Kladov said at the Defense Services Asia (DSA 2016) exhibition on Wednesday.

"If the process develops according to the plan, the corresponding firm contract will be ready by the end of 2016. We hope that the relevant work will be started at the Indian production site as early as in 2017", he said.

India’s Hindustan Aeronautics Limited (HAL) is Russia’s main partner in the project, but Rostec "will also pick a number of other Indian companies for the participation in the project," Kladov added.

The agreement on joint production of the Ka-226T helicopters was signed in December 2015. It was planned to manufacture at least 200 helicopters of this type. In February 2016, Deputy Director General of Russian Helicopters (a Rostec subsidiary) Igor Chechikov said that 60 aircraft will be supplied to India assembled, and another 140 are planned to be assembled at Indian production facilities.

The Ka-226T is a light, twin-engine multi-role helicopter offered by Russian Helicopters, for military and civilian missions. The military version of Ka-226T is designed for operation in hard-to-reach upland conditions as well as hot and cold climates. The Ka-226T is produced by Kumertau Aviation Production Enterprise, a part of Russian Helicopters, and is currently in service with the Russian Air Force. It performs surveillance, reconnaissance, search and rescue, targeting, and transportation of cargo and troops.

Ka-226T is a light utility helicopter with the take-off weight 3.4 tons. It can carry up to 1.5 tons of cargo or up to seven passengers. The helicopter can fly at a maximum speed of 250km/h and cruise speed of 220km/h. It has a maximum flight range of 600km with main fuel tanks. The operational and hover ceilings of the helicopter are 5,700m and 4,100m respectively and the maximum rate of climb is 10m/s.