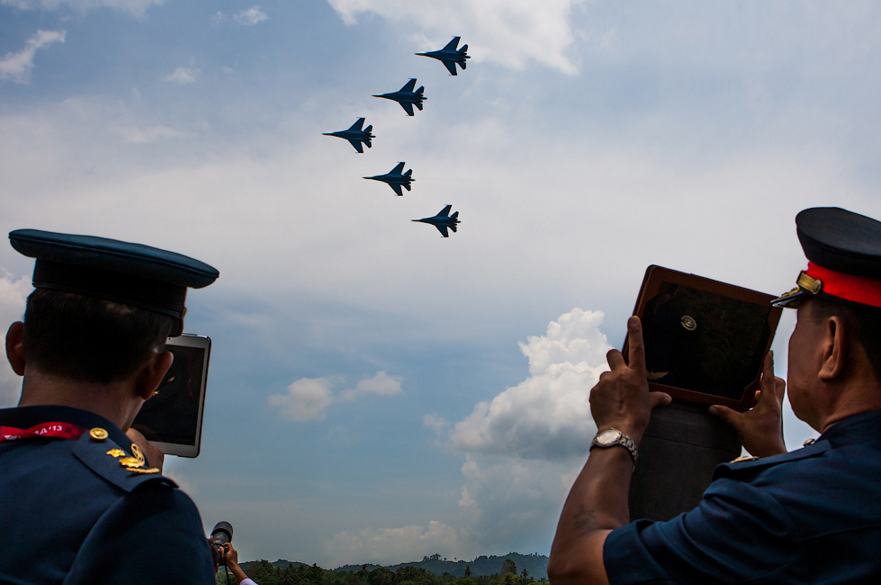 mil.ru
Russsia delivered arms and military equipment to the Asia-Paicific and Asian countries to the tune of $30.1 billion in 2007-2014.

The arms market of the Asia-Pacific region still remains one of the biggest regional markets. In the last several years, Russia has secured its position at it. According to the US Conressional Research Service (CRS), Russsia delivered arms and military equipment to the Asia-Paicific and Asian countries to the tune of $30.1 billion in 2007-2014. The aforementioned deliveries included:

As Vladimir Yereschenko, chief, regional department, Rosoboronexport, and head, Rostekhnologii-Rosoboronexport joint delegation, has told TASS at the Defence Services Asia 2016 arms show (DSA 2016), Russian weapons and military equipemnt are in high demand at the Asia-Pacific arms market. "Rosoboronexport’s largest arms deliveries have been made to Asia-Pacific nations as usual," Yereschenko added. At the same time, Rosoboronexport has seen a spike in orders awarded by Middle East and North African states recently.

"We expect no sharp change to the structure of our order book in the coming years, through there may be adjustments, e.g. the number of orders placed by Middle East and North African states has grown sharply in recent years,"  Vladimir Yereschenko said.

The Project 636.3 (NATO reporting name: Improved-Kilo class) and Amur-1650 submarines, Project 11356 (Krivak-V-class) and Gepard-3.9 (Gepard) frigates and shipborne weapons are the most promising for promotion in Asia-Pacific, Yereschenko said. Responding to a TASS correspondent’s question about the state of affairs in promoting Russian naval weaponry in Asia-Pacific, the head of the delegations said Russian-built naval materiel ranging from submarines to hovercraft and coastal defence missile systems was in service with the Vietnamese, Indian, Indonesian, Chinese and South Korean navies.

"We are in talks on both the repair and upgrade of the in-service equipment and promotion of a wide spectrum of advanced systems. We deem the Project 636.3 and Amur-1650 submarines, Project 11356 and Gepard-3.9 frigates and shipborne weapons to be most promising in this respect," Vladimir Yereschenko said.

"We have been aggressively offering integrated protection and defence systems for the littorals and ports under our advanced large-scale Integrated Security Systems program," Vladimir Yereschenko added.

Estimating the military-technical cooperation between Malaysis and Russia, he pointed out that Russia is willing to offer Malaysia cutting-edge fighters fully satisfying its needs.  "Malaysia has not issued tenders for an advanced fighter yet; hence, it is premature for us to announce that we will bid. At the same time, Russia is ready to offer a fighter meeting Malaysia’s requirements completely," the head of the delegation told TASS, fielding a question about Russia’s bidding in an advanced fighter tender for the Royal Malaysian Air Force.

Rosoboronexport’s representative emphasized that the exportability of Russian armament has always been high in Asia-Pacific. "Today, it is boosted by the successful use of Russian weapons on large-scale counterterrorist operations. When customers need weapons for something more serious than parades, they turn to us," Vladimir Yereschenko said.

"The Royal Malaysian Air Force has been operating Russian-made [Sukhoi] Su-30MKM [NATO reporting name: Flanker-H] fighters with success. A maintenance and repair center has been set up for them, an up-to-date simulator has been supplied, and the relevant infrastructure has been provided under an offset program. Therefore, the acquisition of Russian-made fighters seems to be logical and efficient in economic terms," Yereschenko stressed.

"Anyway, it is up to Malaysia. On our part, we are making adequate marketing efforts to promote Russian-made Sukhoi fighters," Vladimir Yereschenko said.

According to Yereschenko, special attention will be paid during the show to the further refining of the aftersales support of the Russian-made aircraft operated by the Royal Malaysian Air Force and to the overhaul of its Sukhoi Su-30MKM fighters.

According to the Stockholm International Peace Research Institute (SIPRI), Malaysia awarded Russia the contract for 18 Su-30MKM fighters in 2003, and the delivery had been completed by 2009, with the deal’s value being about $900 million.

Rosoboronexport is expecting keener interest in the Club missile system - an export version of the Kalibr (NATO reporting name: SS-N-27 Sizzler) - on the part of potential customers in Southeast Asia and other corners of the world, Yereschenko said.

"The mass launches of the Kalibr system’s [the analog of the Club missile system] cruise missiles by Caspian Flotilla [surface] ships and the Project 636.6 [Improved Kilo-class] Rostov-on-Don submarine against terrorist targets in Syria have proven their high effectiveness, pinpoint accuracy and long range," Vladimir Yereschenko said.

"The interest in the Club missile system, which we are promoting on the global market, has always been keen, because the system is among the armament types boosting the strike capability of a navy," the head of the delegation said.

"Now, we expect potential customers in Southeast Asia and other regions to express higher interest in it. Actually, this goes for both the Club missile system proper and the submarines and surface ships it equips," Rosoboronexport’s representative emphasized.

"Vehicles of this type are superior to their rivals by operational characteristics, combat capabilities and the cost-efficiency ratio," he added.

According to Yereschenko, the Verba man-portable air defence system (MANPADS) will allow Russia to maintain its positions on the MANPADS market.

"The participants in the exhibition and its visitors showed great interest in the system. The Verba man-portable air defence missile system will allow Russia to maintain positions in this market sector steadily in the coming years," he added.

According to the delegation head, Russia has traditionally held the leading positions on the man-portable air defence missile system market. Thus, Russian-made systems are in stable demand in all the regions of Russia’s presence.