Russia to bolster eastern outposts at Sakhalin and Kuril Islands 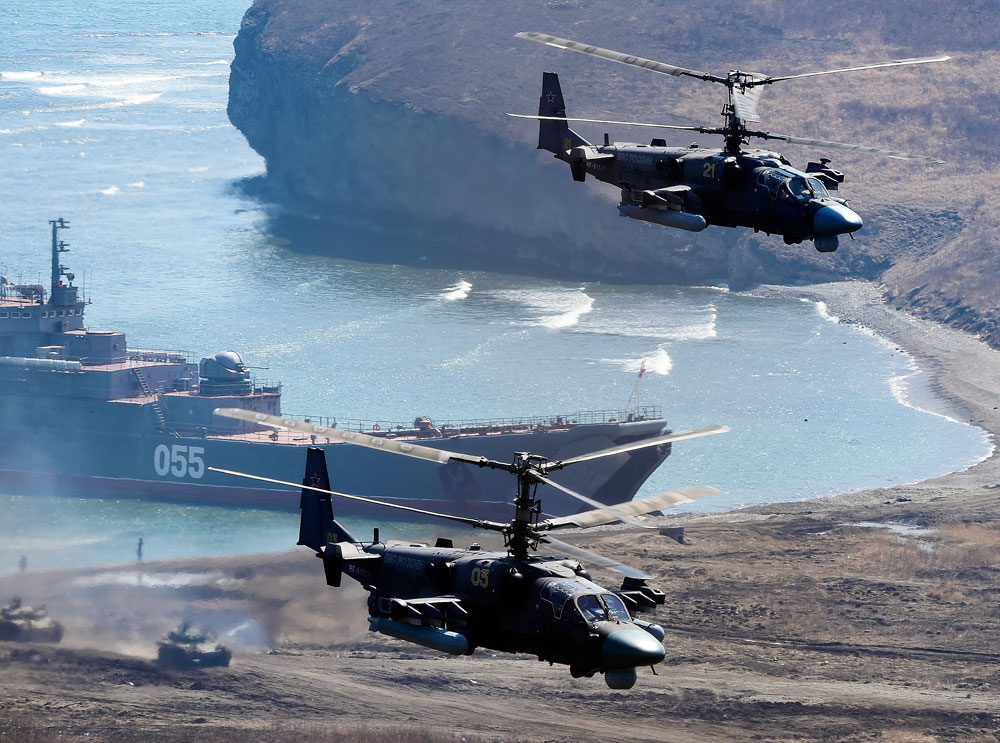 Yuri Smityuk / TASS
Strengthening strategic military infrastructure in the Far East will be a Russian priority up to 2020, the commander of Russia’s Eastern Military District said. However, a specialist said it was unlikely Russia would set up new military bases on the Kurils, because of the geographical risks involved.

The Russian Defence Ministry has sent an expedition to the Far East to explore the disputed Kuril Islands for the interests of the Pacific Fleet.

The expedition to the archipelago includes six Pacific Fleet ships and vessels and is led by the large landing ship Admiral Nevelskoi. More than 200 people are involved in the operation.

The Kuril islands in the archipelago is partly claimed by Japan and remains a source of tension in relations between Moscow and Tokyo,

Colonel-General Sergei Surovikin, commander of the Eastern Military District, said the Russian state is taking unprecedented measures to ensure the security and territorial integrity in this area. The Ministry of Defence has been tasked to develop military infrastructure on Sakhalin Island, the Kuril Island chain and in the Arctic zone by 2020.

Surovikin said a planned rearmament of the formations and units is underway, along with work on improving the level of social protection for all categories of military personnel and their families.

Mistakes in development of the Kuril Islands

Dmitry Safonov, military analyst for the daily newspaper Izvestiya, said the armed forces are looking for new basing areas for the Pacific Fleet or dispersal points for the troops. In particular, the Eastern Military District's command is looking for additional options to build positions for air defence and coastal missile units.

However, there are a lot of nuances in the region, which limit the ability of the Russian armed forces to carry out their designated role.

"Our history has an interesting precedent – the Ministry of Defence set up an air defence base on the island of Shumshu [adjoining Kamchatka] and, after a few years, it was washed away by a tsunami," said Safonov. "One has to understand the geographical features of the region and take into account that not all the islands are suitable for deploying military units, not to mention building a dugout and living in it."

"At first, everyone laughed that roads on the islands were covered with mesh-netting – they stripped it off and covered it all in concrete, and then built houses on the sides. Then came the fall, and the roads got washed out,” he said. “Suddenly it became clear that the Japanese were much smarter than our guys: Mesh-netting held the mud during the rainy season, and it was the only way to travel, rather than trying to 'swim' across the islands."

According to Safonov, houses turned into ruins under the pressure of far eastern winds and rains in just one season. And every year, money had to be spent on restoration of the entire infrastructure.

"For how many years did the Soviet government not build anything there?" he said. "Why did they stay only on Kunashir and Iturup [the two islands closet to Japan, under Soviet/Russian control since 1945 – RIR]? Perhaps it says that the Soviet Union's geologists and geographers had a good understanding of the situation."

According to Safonov, Russia will not deploy military units on the new islands.

Weapons for the Kuril Islands

Modernization and re-equipment of the Kuril island range has been underway since 2010. Russia’s security in this region is still based on the 18th machine-gun and artillery division, which is part of the Eastern Military District. Over the years, it has increased in size and now employs a separate tank battalion equipped with the T-80BV.

According to Defence Minister Sergei Shoigu, Bal and Bastion missiles will be additionally deployed there in 2016, along with new-generation Eleron-3 unmanned aerial vehicles. The Tor-M2U anti-aircraft missile systems were also deployed in the Kuril Islands last year.