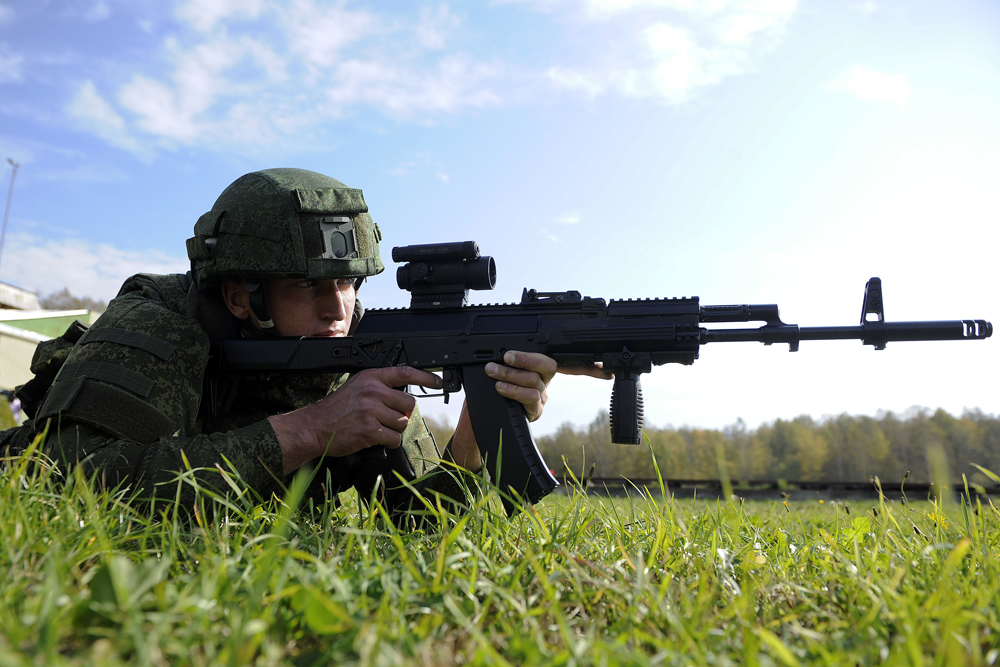 The advantage of the AK-12 is its redesigned trigger mechanism that allows the machinegun to be recharged with one hand.

Sergey Bobylev / TASS
Russia’s Defence Ministry has begun combat tests of the AK-12. As Vladimir Dmitriev, marketing director of the “Kalashnikov” Concern, told RIR, the Ministry would determine, by the end of the year, which of the two machine-guns – AEK-971 or AK-12 – would be part of the equipment for the soldier of the future; “Ratnik.”

The Russian Defence Ministry has launched a series of military trials of the AK-12, which the “Kalashnikov” Concern expects to include in the future “Ratnik” soldier’s equipment. It will become clear what weapon a soldier of the Armed Forces would be fighting with by the end of 2016.

Which machine gun will the future soldier get?

“Military trials are the last step before taking a new model for service. The machine guns will be transferred from one military unit to another to confirm their features under different operating conditions. The final decision on the fate of the weapons can be made as early as October, “- said Vladimir Dmitriev, director of “Kalashnikov” marketing concern to RIR

Two machines are involved in the contest to choose a promising rifle system for the “Ratnik” equipment: the AK-12 of the “Kalashnikov concern (the factory is located in Izhevsk, 1.200 km east of Moscow) and the AEK-971 of the Kovrov plant, named after Degtyarev (260 km east of Moscow).

The major difference between the Izhevsk and Kovrov machine guns is the action of the attack force. The AK-12 has retained the classic shock equipment, which has faithfully served all Mikhail Kalashnikov machine guns for over half a century.

The AEK-971 bolt is a telescopic beam of approximately the same mass. After a shot has been fired, the bolt and the beam hit the front and the rear of the machinegun at the same time, thereby extinguishing the impulses acting on the rifleman’s hands (in fact, the machine tests the reaction only as a counter force of the bullet flying out of the barrel). Hence, the first three bullets fired from the AEK-971 hit the target precisely, while for the AK family of machines, only one of them hit the centre of the target, and the others went sideways.

Who is the favourite in the “arms race”?

The Kovrov AEK-971 was, until very recently, considered the uncontested favourite. However, the new construction details make the Kovrov machine heavier than the AK-12. The Izhevsk designers based their designs on the classic Kalashnikov assault rifle, but reduced its recoil force. The body of the machine was slightly shorter than that of the AK-74, the handle has been shifted slightly forward, and the weight of the moving parts of the shutter is better distributed. The impact of hitting the bolt at the shotgun receiver (and the return to the starting position) has only been reduced, but has not been completely done away with.

The advantage of the AK-12 is its redesigned trigger mechanism that allows the machinegun to be recharged with one hand. There is no need to juggle the shutter each time you change the store. Both machine guns are equipped with a folding butt. The ‘Picatini’ planks have been fixed on them, allowing a number of additional accessories to be fixed onto the tube, including a thermal aiming system.

Trouble-free operation of both machineguns has been checked, while shooting with dry (non-lubricated) parts at temperatures from +50 to -50, while shooting for several days without cleaning and lubrication at different angles of declination and in positions rotated about the longitudinal axis. As has been repeatedly and publicly acknowledged, the AEK-971 has shown the best results.

The last step before the adoption of the “Ratnik”

Michael Osyko, head of division of the State Defence order, said other than the machinegun, there are no unresolved issues remaining regarding the equipment. After selecting the weapons, the “Ratnik” complex will be put into service. At the same time, Osyko emphasizes that while selecting a new machinegun, the Ministry of Defence will also be guided by the price. They will buy the cheaper product.