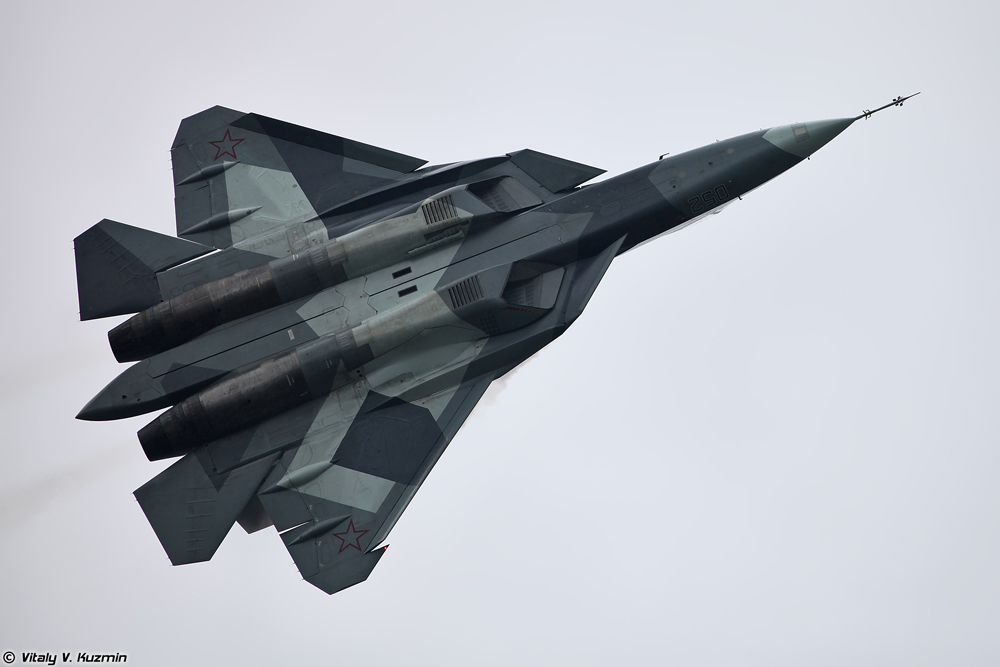 The newest Russian jet fighter was built as the main competitor to the F-22 Raptor.

Vitaly Kuzmin
Testing the eighth fifth-generation fighter, the T-50, has begun in Komsomolsk-on-Amur. A representative from the development company said they would finished testing the first 12 aircraft by the end of autumn, after which a contract would be signed with the Ministry of Defence for supply of additional aircraft.

The Corporation has entered the final stage of design work and test flights, before delivery of the first squadron (12 aircraft – editor’s note) of PAK FA to the country’s armed forces. (Pamphlet with photos of the T-50)

Dmitry Litovkin, military analyst at Izvestia, said the T-50 will still be worked upon first few years after a decision to place it into service, to bring it up to the generally accepted principles and indicators of a fifth generation fighter aircraft.

“The Type 30 engine needed for a fifth-generation fighter does not yet exist. The T-50 will go into serial production with engines that are today used on the Su-35s, a 4++ generation aircraft. They still cannot provide the ratio of the weight/thrust/fuel consumption needed by a fifth generation fighter, despite having the ability to develop supersonic cruising speeds,” said Litovkin.

He noted that to accelerate research, development, and testing work, it is necessary to work with Russia’s strategic partners in defence cooperation: India, Algeria, and Vietnam.

“These countries have independent military-technical policies, and have the money to purchase advanced types of weapons. Joint R&D work will accelerate the creation of a “typical” fifth-generation fighter,” said Litovkin.

A new contract for delivery of fifth generation aircraft will be discussed with the Ministry of Defence at the end of 2016, Litovkin said, by when the Ministry would have determined the number required to meet the needs of the aerospace forces.

Features of the T-50

The newest Russian jet fighter was built as the main competitor to the F-22 Raptor. The ‘American fighter’ has already been in service with the US Air Force for more than five years and has been used in action over the skies of Iraq.

Domestic arms manufacturers did not disclose how much was spent on research and production work to design the T-50, however, it is known that the figure was several times less then what the US spent on the F-22. Washington invested more than 74 billion dollars to build the F-22 Raptor, and received a “product” worth 146 million dollars. Under contract with the US defence industry, the Pentagon bought 187 fighters, after which the F-22 Raptor programme was closed.

“The T-50 will go into serial production much later than its American counterpart. This will allow all the pros and cons of the existing machines to be developed, and then taken into account when creating our own aircraft. A similar situation existed at the time they were developing the multi-purpose fourth-generation fighter – the Su-27. The domestic prototype came out much later than the F-16, and took into account the errors made by the Americans. As a result, the domestic Sukhoi was able to surpass the ‘American’ in terms of combat characteristics,” Vadim Kozyulin, Professor at the Academy of Military Sciences, told RIR.

Kozyulin noted that the T-50 is “able to carry the entire range of current high-precision air-to-air” missiles, as well as all guided bombs.

“As part of the concept of ‘stealth’, special missiles were developed for the PAK FA, with a square cross section, which enables more warheads to be loaded when flying on combat missions,” he said.