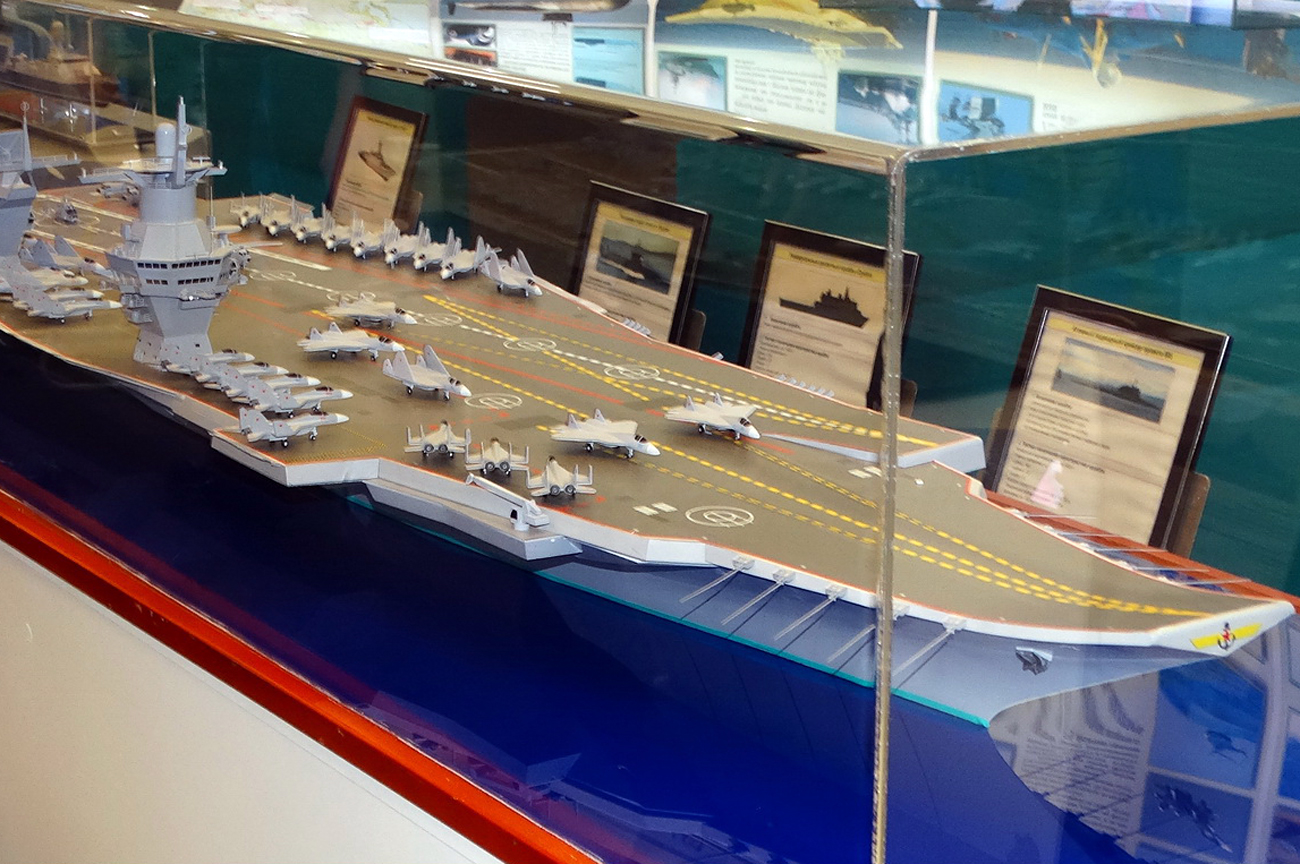 bastion-karpenko.ru
India wants a medium sized aircraft carrier, but Russia has thrown in a tantalising offer of its 100,000 ton Storm design as a counter to the US.

The Indian Navy’s second indigenous aircraft carrier, INS Vishal, will be a 65,000-ton nuclear-powered behemoth. Capable of carrying up to 55 aircraft, it will be more than 300 metres long, making it almost double the size of India’s first indigenous carrier, INS Vikrant, which is under construction.

Even as India is discussing the transfer of American technology for INS Vishal, Russia has offered its new multipurpose carrier design called Project 23000E ‘Shtorm’ (Storm). Krylov State Research Centre, a St Petersburg shipbuilding research and development institute, says its vessel has a displacement of up to 100,000 tons, is 330 meters long, and will have nuclear or conventional propulsion.

The problem is that like oil and water, Russian and American technologies don’t mix. India is keen on acquiring the US-developed electromagnetic aircraft launch system (EMALS), which allows aircraft to take off with a much larger fuel and weapons load than what is possible on an aircraft carrier with a ski jump. But it is a foregone conclusion the Americans won’t allow India to graft EMALS on a carrier project that involves Russia.

Russian bid: Pluses and minus

The Russian shipbuilding industry has gained valuable experience building the Indian Navy’s flagship carrier, INS Vikramaditya. Moscow is also playing a lead role in designing and developing the INS Vikrant. The St Petersburg-based Nevsky Design Bureau is supplying the Aviation Facilities Complex, which comprises one of the most critical areas of an aircraft carrier and houses its aviation armament, devices and stationary and mobile systems required for using the aircraft onboard the carrier.

The Russian bid will have many backers in India’s defence establishment primarily because Moscow is willing to allow technology transfers without restrictive end-user conditions. In contrast, the other two major contenders, the French and especially the Americans, are unlikely to be so liberal with leading-edge technology.

With a Russian vessel, there won’t be any issues about carrier-based aircraft either. The Indian Navy operates the Russian MiG-29K and India is cooperating with Russia in the design and production of the Sukhoi PAK-FA stealth fighter, which will have a naval variant.

On the down side, Russia has never built a nuclear-powered aircraft carrier whereas the US operates 11 such vessels currently. (It’s not that Russia could not build nuclear powered carriers. The old Soviet naval doctrine was sea-denial and the lynchpin of this strategy was the anti-carrier nuclear-armed cruise missile launched by maritime ‘Backfire’ bombers.)

Regarding Russia’s ability to undertake a project of such scale, Dmitry Gorenburg, a research analyst at the Center for Naval Analyses in Washington, says (https://russiamil.wordpress.com/2015/01/23/russian-naval-shipbuilding-plans-rebuilding-a-blue-water-navy/) the long-running saga of the INS Vikramaditya rebuild shows the problems Russia may face as it starts to build larger and more complex ships. “Russian experts have noted that Russian shipyards could build a 60,000-70,000 ton carrier in 4-5 years, but could have difficulties if the military decides to build a larger super-carrier,” he writes.

However, this view is based on the assumption that Russian shipyards have not gained any experience from INS Vikramaditya. At any rate, if the carrier is built in India, the timelines and deadlines would be more or less under the Indian Navy’s control.

For India to accept the Russian offer would mean a huge step-up from the originally envisaged displacement of 65,000 tons to the 100,000-ton ‘Storm’. According to Eric Wertheim, (https://news.usni.org/2016/07/11/russians-pitch-storm-nuclear-carrier-design-india) the author of 'Combat Fleets of the World', the odds of India needing the blue-water capability a nuclear carrier would bring are small. “If you’re looking at regional operations, then I think it makes less sense to do nuclear propulsion,” he told the US Naval Institute.

However, there’s no reason why India’s strategic reach and vision should be limited to the Indian Ocean. The new carriers are aimed at countering the growing Chinese presence in the region. If needed, Indian carriers should be able to sail out to distant trouble spots, say a major evacuation of Indians or Indian peacekeeping soldiers in Africa or Europe.

A nuclear-powered carrier can remain at sea for up to a year or more and only needs to return to port for crew rotation. It also requires less down time during maintenance as compared with a conventional powered ship. In terms of gas mileage, aircraft carriers are the biggest guzzlers of fuel. The USS Independence, (http://www.envirosagainstwar.org/know/read.php?itemid=593) for instance, consumes well over 567,000 litres of fuel a day. An oil importing country like India can ill afford to burn that much fuel. Nuclear powered carriers cost more to build but are more energy efficient.

Since India doesn’t plan on having more than three or four carriers at a time, it makes sense for the navy to have an all-nuclear fleet so fleet availability remains high.

Spare me the worries

While Russia is a reliable weapons supplier and can be trusted to never dangle the threat of sanctions, especially during a crisis, the supply of spares can sometimes be maddening. In fact, the problem is worrying the defence establishment to such an extent that this month the Defence Ministry called a meeting of Indian private sector companies. The meeting was held to address the problem of non-availability of spares, and was attended by senior officers from the three defence services among others.

While a number of Russian-supplied platforms, including the Sukhoi Su-30MKI, have been impacted by the trickle of spare parts, it is not known to what extent the navy is affected. However, going by the relatively smooth sailing experienced by INS Vikramaditya, the Indian Navy seems to be doing fine.

One of the bottlenecks is at Rosoboronexport, the cartel or middleman through which Russian defence companies export their wares. The solution could be to allow Indian companies to allow production of spares via technology transfers bypassing Rosoboronexport.

The Defence Ministry is mulling a tweak of the defence procurement policy in order to give firm orders to Indian companies for five years so that these firms are assured of making a profit. A project of the magnitude of the 100,000 ton ‘Storm’ would be hugely advantageous to India’s defence industry as well as the economy, and it would be in line with the ‘Make in India’ programme. Such a policy would translate into a huge number of jobs for Indian engineers and workers.

That sounds great, doesn’t it? But if the US indeed parts with EMALS technology, it would be nothing short of a miracle. And as we know, miracles happen only within fantasy books aimed at hoodwinking the gullible.

The US has refused to part with sensitive defence technology on a number of occasions. In the late 1970s, the US blocked the sale of Gripen jet fighters to India because the aircraft was powered by an American engine. This year South Korea – a close and trusted US ally – found its KFX stealth fighter in jeopardy after the Pentagon blocked the transfer of American technology that is critical to the programme.

Since India is not in the category of close ally and US lawmakers vetoed India’s elevation to such ‘twice born’ status, it remains to be seen what rabbit Washington will pull out if its hat to transfer EMALS to India.

EMALS technology will come at a price – a huge one at that. However, it won’t be what the Chinese navy’s Rear Admiral Li Jie (http://www.wantchinatimes.com/news-subclass-cnt.aspx?id=20150208000020&cid=1101&MainCatID=11) believes. According to Li, a former captain, India should take longer to consider its purchase of American technologies because the Indian Navy has a tradition of using the Russian style ski-jump flight deck. The sudden change to an angled flight deck and the use of EMALS would turn all the Indian Navy's accumulated knowledge on carrier operation into nothing, Li says.

The American style angled deck with its CATOBAR (catapult assisted takeoff but arrested recovery) system is the most efficient way of launching – and recovering – aircraft at sea. EMALS will further enhance these efficiencies. But the point is India should not wait for the US to make up its mind about parting with its crown jewels. Besides, EMALS is still experimental and the first test launch of an aircraft won’t happen until 2017.

EMALS could come with a quid pro quo – India would be forced to accept US weapons systems and aircraft that don’t meet the Indian Navy’s requirements. One shudders to think of the implications if the disastrous F-35 is forced down the Navy’s throat.

Also, would the US allow the Indo-Russian BrahMos missile to be integrated into a US-built or assisted aircraft carrier? The supersonic – and in future, hypersonic – BrahMos has become the Indian Navy’s signature missile. Although aircraft carriers generally do not carry strike weapons, there’s no reason why the INS Vishal can’t. So if the Indian Navy’s flagship isn’t allowed to be equipped with an extended range (1000 km) BrahMos, it would be missing out on a dramatic force multiplier.

Whether it opts for an entirely home-grown design or decides to sail with a foreign partner, the Indian Navy is in the enviable position of having plenty of suitors. How it chooses to use that leverage will decide the shape – and fate – of the INS Vishal.